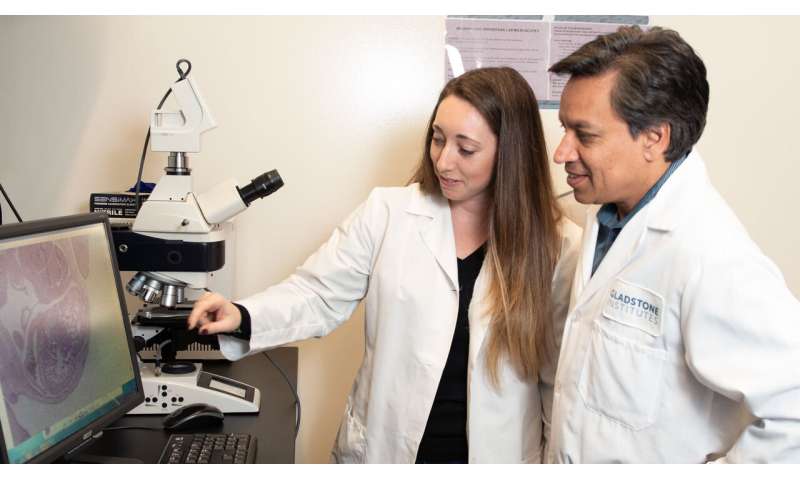 Congenital heart disease occurs in up to 1% of live births, and the infants who are affected may require multiple surgeries, life-long medication, or heart transplants. In many patients, the exact cause of congenital heart disease is unknown. While it is becoming increasingly clear that these heart defects can be caused by genetic mutations, it is not well understood which genes are involved and how they interact. Genetic mutations, also called genetic variants, can also cause poor heart function, but the type and severity of dysfunction varies widely even among those with the same mutation.

The Human Genome project allowed scientists to identify some rare cases of disease caused by severe mutations of a single gene, but scientists believe that more common forms of disease may be the result of a combination of more subtle genetic mutations that act together. Yet experimental proof for this concept of human disease has remained elusive—until now.

In a paper published May 31 in the journal Science, scientists from the Gladstone Institutes and the University of California, San Francisco (UCSF) used technological advances to prove that three subtle genetic variants inherited within a family worked together to cause heart disease in multiple siblings at a very young age.

“The idea that several genetic variants are necessary to cause most complex diseases has been around for a long time, but proving it has been difficult,” said Casey Gifford, Ph.D., a staff scientist at Gladstone who is the first author on the paper. “With the advent of CRISPR genome editing and improvements in human pluripotent stem cell technology, we felt that we finally had the right tools to test this hypothesis once we found the right case to study.”

The right case turned out to be a family in which multiple children suffered from the same form of severe congenital heart disease that resulted in poor pumping of the heart. Gladstone President and UCSF Benioff Children’s Hospitals cardiologist Deepak Srivastava, MD, first encountered the family when he treated a two-month-old child for left ventricular noncompaction, a type of heart disease where the cells in the left ventricle don’t mature fully and therefore can’t contract well leading to heart failure. While this child survived after requiring emergent life-support, she had a sibling who died from the same condition as a fetus in the third trimester, and her 4-year-old sister also had a similar condition. After running tests on both parents’ hearts, the researchers learned that the father also had a milder, adult-onset version of the disease, while the mother’s heart was normal.

“Given the severity of the disease in the children and the fact that one of the parents had an asymptomatic form, we suspected that the condition in the children was caused by a combination of the mother and the father’s genes,” says Srivastava, who is the senior author on the paper.

To test this theory, the researchers sequenced the genome of the family and discovered that the father had mutations in two genes, MKL2 and MYH7, that placed him at risk for heart disease. There are normally two copies of each gene in our genome, and in this case only one copy of MKL2 and MYH7 was mutated, resulting in a change of just one of hundreds of amino acids. All three children not only inherited both of these mutations from their father, but also a third mutation from the mother disrupting one copy of the gene NKX2-5. This mutation also affected just one amino acid and has been reported in the general population without heart disease. But the children also shared many other genetic variants in common, so whether altering just one copy of these three genes was enough to cause disease remained an open question.

Using CRISPR genome editing, Srivastava’s team created the exact same mutations on one copy of each gene in mice. The mice that only harbored one copy of the father’s two variants or the mother’s variant didn’t show any signs of heart disease. Remarkably, mice that had all three variants showed heart defects that mimicked those observed in the children. There was not only damage to the structure and function of the heart similar to the human disease, but also changes in the expression of hundreds of other genes essential for development of the heart and coronary vasculature.

“Our findings suggest that the gene inherited from the mother exacerbated the problem caused by the father’s genes, resulting in a much more severe form of heart disease in the children,” explained Gifford, who was a Damon Runyon Cancer Research Foundation Fellow when she performed the research.

In a final step, the researchers generated induced pluripotent stem cells from each of the family members and then turned the stem cells into beating heart cells. The cells from the children, which carried all three mutations, showed signs of disease, while the parents’ cells did not.

The researchers say the study also answers an important question about how people with the same gene mutation can have different forms of the disease. For example, mutations of the gene MYH7 have previously been implicated in several different types of both congenital and adult-onset heart disease. The new data suggests that a modifier gene, in this case, NKX2-5, influences the effect of MYH7 variants to change how disease manifests.

“This work finally provides experimental proof of how a modifier gene might be functioning to influence the disease process in humans, and how multiple genes work together to cause human disease,” said Srivastava, who is also a professor of Pediatrics and Biochemistry and Biophysics at UCSF. “It points us to a way that you could make a mutation in a gene better or worse depending on what it’s combined with. This discovery opens the door to identifying genetic modifiers of disease and using them as targets to develop novel therapeutics.”

Up to 35 degrees in the apartment: 8 tips on how you can go to sleep still good-Bay

Inside the Brave New World of FaceTime Dating