January means a lot of things: recovering from the holiday rush, packing away the Christmas ornaments, and, if you live in a northern region like I do, settling in for many (many) more weeks of cold, dreary days.

But January also brings a new sense of energy, of optimism, of a “go-get-it” attitude for many. And while that “New Year’s Resolution” mindset can spark a beneficial health kick or the motivation to organize your closets or the inspiration to finally make a career move you’ve been dreaming about, it can also be toxic and damaging to our children who are watching you and listening to what you say.

Specifically, if you’re using the new year as a jumping-off point for a weight loss journey, it’s imperative that you choose your words carefully when speaking in front of your children. As mothers, as parents, we must be mindful of the damage it does to our kids’ wellbeing when they hear us speak negatively about our own bodies.

I know this, because I lived it. I grew up in a home where my mother refused to take pictures. I don’t recall ever seeing her in a bathing suit. And she constantly, ruthlessly talked about how “fat” she was. (She wasn’t, but that’s not even the point.) By my teen years I was criticizing my body regularly, analyzing every tiny jiggle, every new “curve.” (I was not even 100 pounds, but that’s not the point either.)

The damage of not only being inundated with toxic diet culture on magazine covers, in commercial ads, in movies and TV shows, plus having the primary female role model in my life berate herself regularly in front of me was severe and long-lasting, as I would spend the rest of my life living with the consequences.

Fast-forward another decade or two, and I was now becoming a mother myself. And one of the most pivotal moments in my parenthood journey was the day I found out I was going to have a little girl. 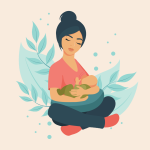 After 8 Years of Pregnancy & Breastfeeding, I Hardly Recognize My Own Body

It was a hot summer day in 2012. My husband and I, along with my squirrelly toddler sons, filled the small ultrasound room as we awaited the news from the technician. Was the baby healthy? Was it a girl or a boy?

And as soon as she delivered the news that our healthy baby was a girl — our first daughter — I felt overjoyed. And almost immediately scared. On one hand, I might someday have a buddy to get pedicures and have marathon shopping days with. Someone to commiserate with about PMS-ing and my hatred for bras and why it takes us 10 times as long to get ready as it does the boys in our house.

But having lived 33 years on this planet as a girl and now a woman, I was also flooded with worry. How would I ensure she grew up loving herself? How could I protect her from the toxic diet culture that permeates our society at every turn and starts targeting girls before they even reach puberty?

It was those haunting worries that led to a promise I made her as I held her tiny newborn body in my arms. I told her, that chilly day in November when she came into this world, that I’d do my best to raise her to love herself, but I knew, in making that vow, that such a promise had to start with me.

Because here’s the truth: Our children watch us. And they listen to us. We cannot loathe ourselves and openly spew hateful, unkind comments about our weight, berate ourselves for having fat here or being too big there, and not expect our girls to do the same. And those of us who were ’70s, ’80s, even ’90s babies know this firsthand, as so many of us grew up hearing it from our own mothers. We watched as they tried fad diet after fad diet, starving themselves, losing weight, gaining weight, repeating this unhealthy cycle over and over, never satisfied with how they looked. Never feeling beautiful or like they were enough or like they were worthy, just as they were.

We internalized this self-hatred, and by our tween and teen years we were dieting ourselves — even though we were still growing, still developing, and had no real reason to already hate our bodies. By our 20s we were fully convinced that any “fat” on our bodies was disgusting and we must work tirelessly to rid ourselves of it — at any cost. We’d been exhausted our whole adolescence and early adult life by the refusal, the inability, to just love ourselves … just as our mothers had been.

But something happened in recent years, didn’t it? Women started talking about body positivity and the winds changed. The conversation changed. We started giving each other permission, giving ourselves permission, to accept — even to love — the skin we were in. We felt liberated by realizing something that, as young girls, we didn’t even know was possible.

And we realized that this was what we wanted for our girls.

So when my daughter came into this world, I made her this promise, this commitment, after a lifetime of self-criticism, a lifetime of never just simply accepting, appreciating, cherishing the one body I was going to be given. I promised her that I would work every day of her life on loving myself, so that she would love her beautiful self too.

Here we are in January again, the time of year when “diets” and “weight loss” become buzz words more than any other season as people across the globe vow to “get healthy” as their New Year’s Resolution. Knowing that, let’s keep a few important things in mind. For one, skinny does not necessarily equal healthy. There are lots of skinny people out there who are healthy, and lots of skinny people out there who are sick. The same goes for all other body types as well.

Secondly, there are a slew of other ways we can frame “getting healthy” in front of our kids that don’t involve the number on a scale or the number on the tag of our jeans. Because do either of those numbers really determine our health? How about setting goals to work out harder, get stronger, run longer distances, eat more vegetables, drink more water, cook more healthy, balanced meals, practice meditation, see a therapist about anxiety … these are ways to measure if we’re getting “healthier” this year that don’t involve the scale, and these are the types of goals our kids should hear us talking about —not depriving ourselves of food or watching the calorie counter on the treadmill or doing daily weigh-in checks.

Imagine if our girls look in the mirror and see how beautiful they are and believe it — in whatever body is looking back at them. Imagine how empowered they’ll be.

That is our job. That is our mission. So my daughter and I are heading into the new year by going for a run together, talking about whatever she wants to talk about that’s rattling around in her tween brain, and coming home to bake cookies that we’ll enjoy as a family.

Because that is what “healthy” looks like to us.