It’s almost time to say goodbye to 2018, so let’s take the chance to reflect on some of the best parenting stories from the last 12 months. Some of them will restore your faith in humans, like the superstar air stewardess who breastfed a passenger’s hungry baby when there was no formula left. Others are real blessing-counting moments — reminders parenthood doesn’t come easily for many, whether those struggles take the form of conception difficulties or mental health issues like postpartum depression or psychosis. And of course, no parenting roundup would be complete without celebrating some of the most headline-grabbing new and impending arrivals (Harry and Meghan, all eyes are on you…)

Read on for 13 of the year’s most memorable parenting moments, featuring inspirational celebrity mamas, proud baby-wearing dads, lessons we can all take on board and the song all toddlers love (and all parents hope will disappear along with 2018). 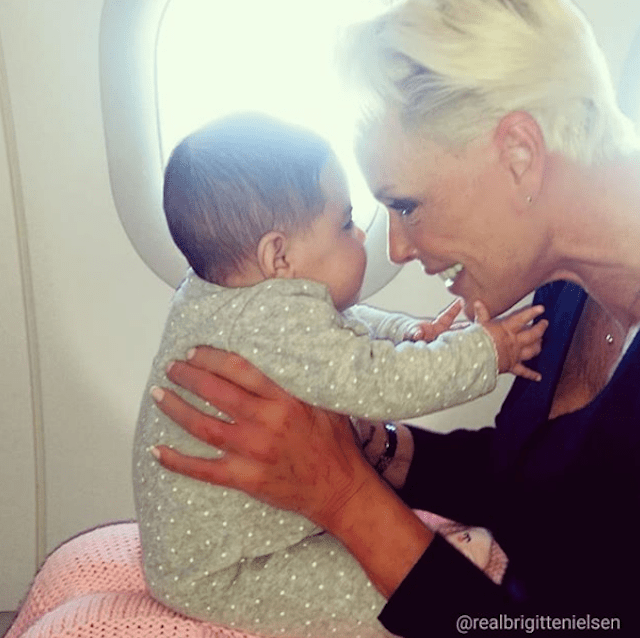 When Brigitte Nielsen announced her pregnancy at the age of 54, pearl-clutchers the world over choked on their sandwiches. But after the safe arrival of baby girl Frida in June 2018. Nielsen insists having a newborn in her 50s is easier than it was in her 20s.

And she’s not the only celeb mom going back to the diaper stage at an age when most moms have left their pregnancy days behind them: Rachel Weisz, 48, gave birth to her first child with husband Daniel Craig earlier this year. 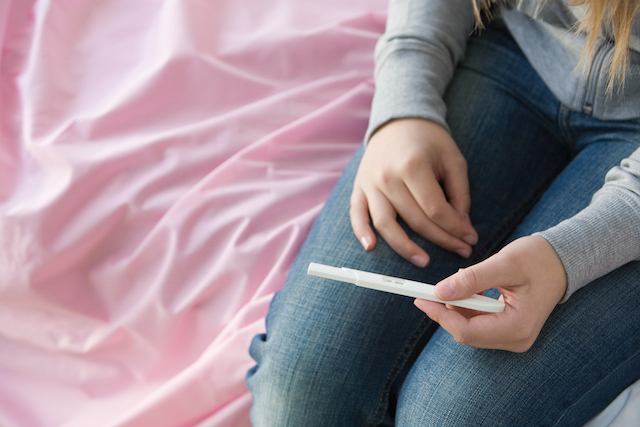 An emotional Facebook post from a woman struggling to conceive went viral in November, being shared over 67,000 times and resonating with many people also desperately waiting to become parents.

“Everyone talks about the positive results, but we rarely hear about the struggles of the negatives,” wrote Megan Lynne Ferrero, from New Jersey. “We rarely talk about waiting for the screen to fill up and noticing it skipped right over the first line that should’ve been there and goes right to that solo second ‘not pregnant’ line.” 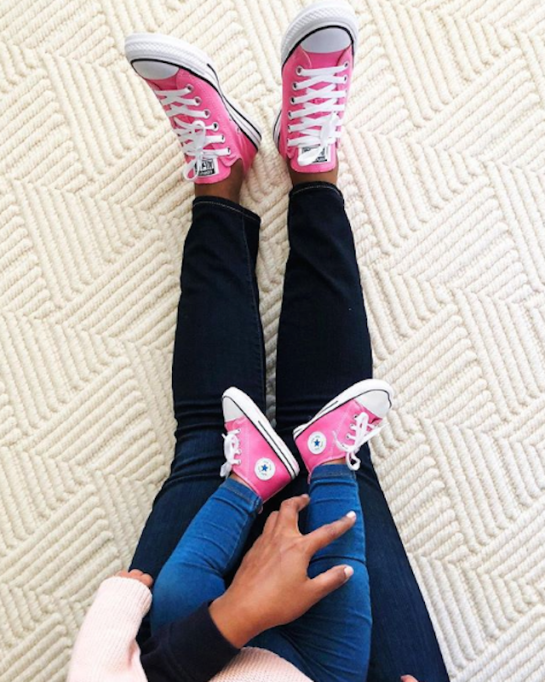 We might not know much about Mindy Kaling’s baby daughter Katherine, who was born in December 2017, but the actor has given us a glimpse into her life as a single mom. At the 2018 Dartmouth commencement, she said: “I remember bringing her home and being in my house with her for the first time and thinking, ‘Huh, according to movies and TV, this is traditionally the time when my mother and spouse are supposed to be here, sharing this experience with me.’ And I looked around, and I had neither. And for a moment, it was kind of scary. Like, ‘Can I do this by myself?’ But Kaling went on to say that she’s not doing it by herself: “I’m surrounded by family and friends who love and support me. And the joy I feel from being with my daughter, Katherine, eclipses anything from any crazy checklist.”

Proof that while it might take a village to raise a child, that village can come in all forms. 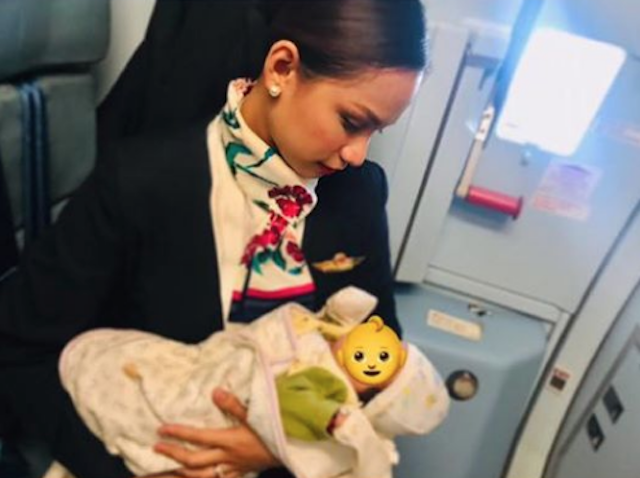 When a mom ran out of formula milk on a flight from the Philippines, 24-year-old flight attendant Patrisha Organo saved the day by offering to breastfeed the hungry baby.

In a Facebook post that went viral, Organo wrote, “As soon as I heard the child’s cry, I knew there had to be something that I could do to help. I knew that I could offer my own milk, as I had been breastfeeding my young child myself, so offered up my services.” 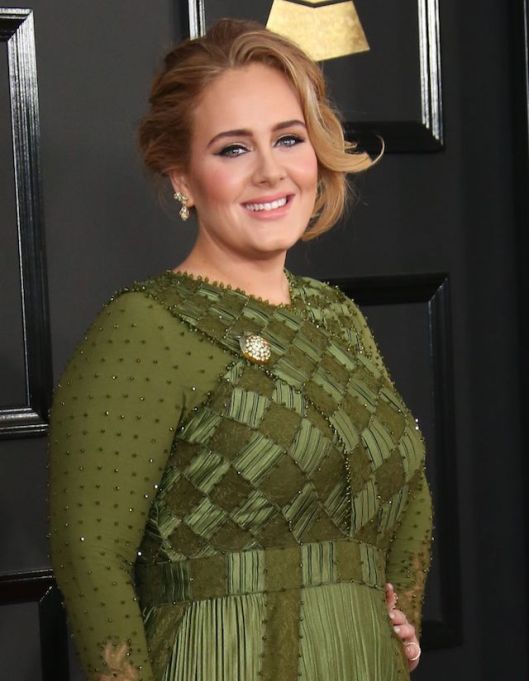 Postpartum psychosis affects thousands of new moms every year, but it’s simply not spoken about the way postpartum depression is. Singer Adele shined the spotlight on the serious mental illness by praising her close friend Laura Dockrill for writing about her own experience.

“I tried to hide my illness from my family and friends because I was so full with shame and guilt because there is a huge expectation on women to be perfect beautiful glowing mama queens that are all encompassing wonderbeasts that can manage anything,” Dockrill wrote. 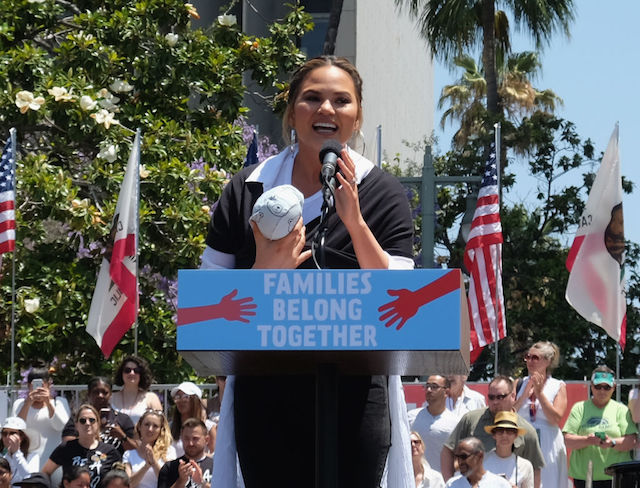 It’s no surprise that one of our favorite celebrity mamas wore her baby son to make a passionate speech at the Los Angeles “Families Belong Together” march in June. Protesting against Trump’s “zero-tolerance” immigration policy that has torn families apart and detained thousands of children in camps, Chrissy Teigen took mama multitasking to a whole new level. 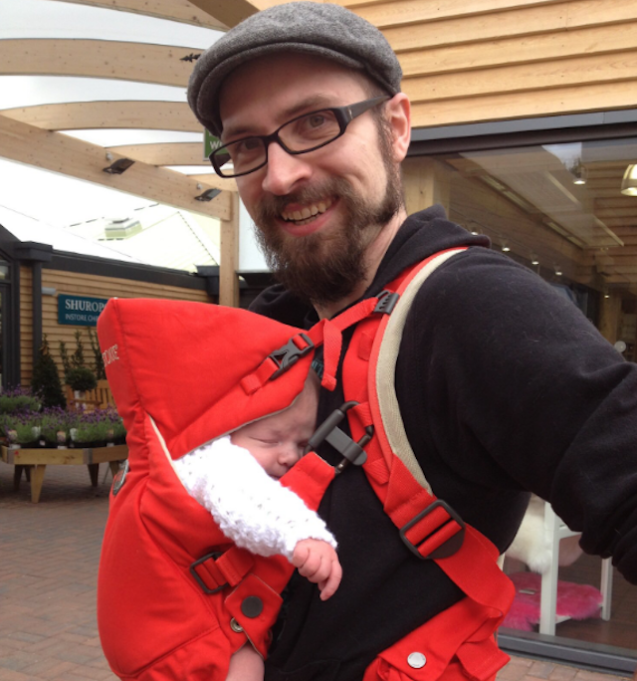 After outspoken British TV presenter Piers Morgan mocked Daniel Craig for wearing his newborn daughter in a baby carrier, dads across the world proudly shared their own baby-wearing pics. Other famous folks got involved, including Chris Evans, who tweeted, “You really have to be so uncertain of your own masculinity to concern yourself with how another man carries his child. Any man who wastes time quantifying masculinity is terrified on the inside.” Take that, Morgan. 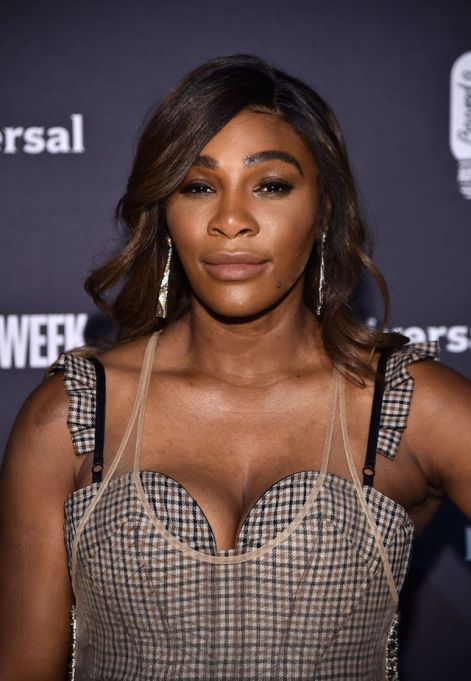 The more we talk about postpartum depression, the better — it affects 1 in 7 of people who become parents. Serena Williams helped raise awareness of the illness after the birth of her daughter, Olympia, sharing her experience of what she calls “postpartum emotions” in an Instagram post in August 2018.

“It’s totally normal to feel like I’m not doing enough for my baby. We have all been there,” wrote Williams, proving that parenthood can take a serious toll on mental health, regardless of wealth and fame. 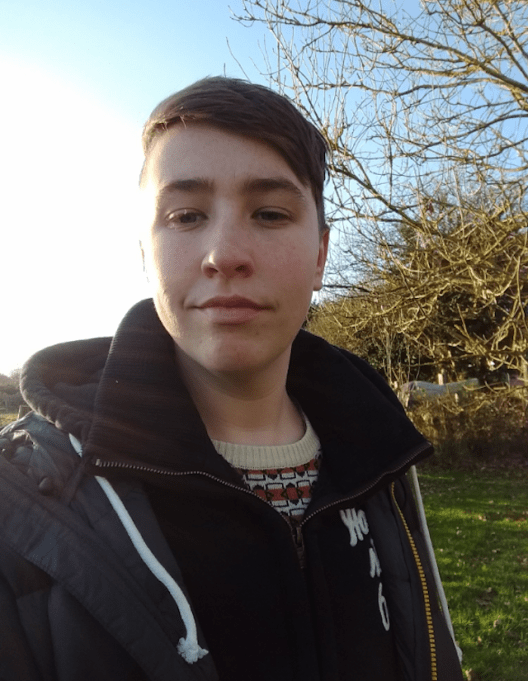 Anyone who’s struggled to explain nonbinary gender to their child just needs to keep it simple, like the parent whose explanation — and message of acceptance — went viral after artist Jay Jackson shared it on Twitter. After their child asked Jackson whether they were a boy or a girl, the parent explained that some people are “he,” some are “she” and others are “they.” The parent also said that “just because we’re told by other people that we are something doesn’t mean that it’s true.”  As Jackson says, it’s “parenting done right.” 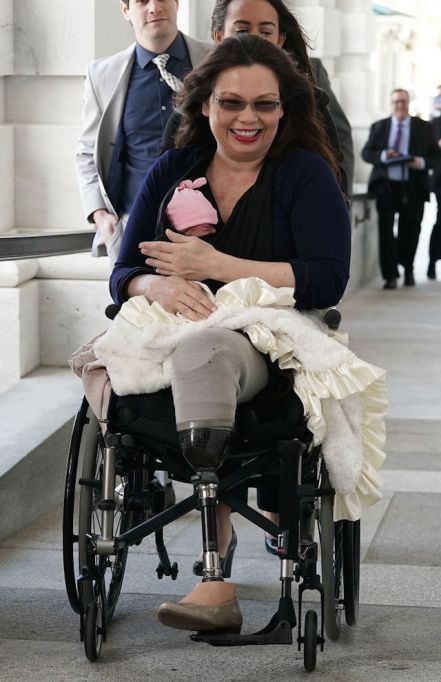 Tammy Duckworth made history in 2018, becoming the first U.S. Senator to give birth while in office. Duckworth welcomed daughter Maile Pearl in April, and when she was only 10 days old, the tot made some history of her own when she accompanied her mom to the floor of the U.S. Congress’ upper chamber a day after it overturned a longstanding baby ban. (Now, we just need the Family and Medical Leave Act to be updated so all moms can enjoy greater flexibility in the workplace and paid family-leave policies.) 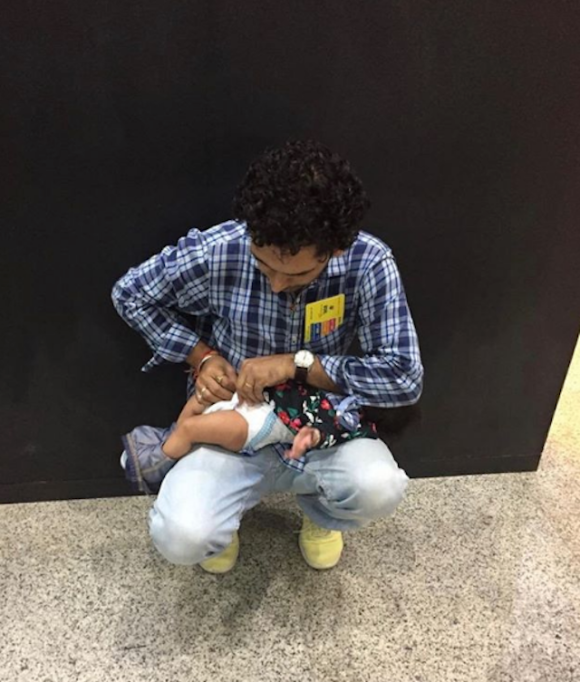 Baby-changing tables are common features in restrooms designated for women, but anyone using a men’s restroom to deal with some diaper action is likely to be lacking the necessary equipment. This issue led U.S. dad Donte Palmer to adopt what he calls a “deep man squat” to avoid changing his 1-year-old son Liam on a dirty restroom floor. Palmer’s picture of the maneuver quickly went viral on social media, with thousands of other dads empathizing and sharing their own “deep man squat” shots, inspiring Palmer to start a #SquatForChange movement to help raise awareness of the need for diaper-changing equality. 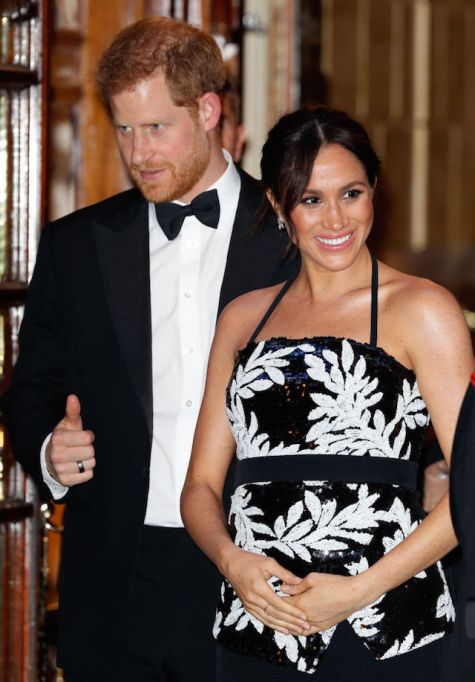 Move over George, Charlotte and Louis — it’s Uncle Harry’s turn. The world went crazy when newlyweds Harry and Meghan announced their pregnancy, and with the new arrival due in spring 2019, there’s still plenty of time to guess the name and speculate about how the couple might do the whole royal baby thing a little differently. 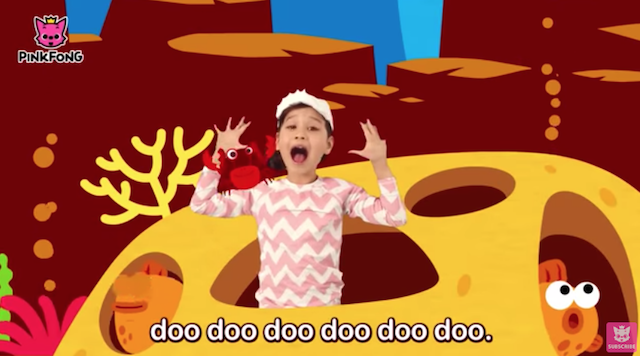 2018 might be coming to a close, but we’re guessing “Baby Shark” isn’t going anywhere soon — much to the despair of parents around the world who want to tear out their hair whenever they hear “doo doo doo doo doo doo” for the 378th time that day. Listen, if it weren’t “Baby Shark,” it would be something equally irritating, so just go with it.

These Free Printables Will Make Learning the ABCs Fun for Kids