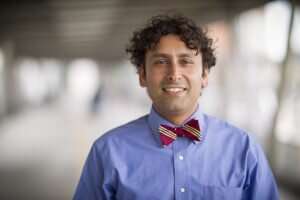 The findings, published in the Journal of Clinical Oncology, were drawn from a phase II clinical trial that included 114 patients with HPV-linked head and neck cancer and a limited smoking history. The researchers reported that they saw a similar progression free survival rate, and that patients experienced fewer long-term side effects in the study compared with patients who received standard intensity treatment in previous studies.

“A simple de-intensification strategy of reducing radiation and chemotherapy appears to be as effective at cancer control as the standard seven-week regimen,” said UNC Lineberger’s Bhishamjit S. Chera, MD, associate professor in the UNC School of Medicine Department of Radiation Oncology. “Furthermore, there were fewer toxicities.”

Chera said the major long-term side effects of radiation treatment are related to swallowing and dry mouth. Previous studies have shown the majority of patients treated with standard intensity chemoradiotherapy require a temporary feeding tube and some have significant long-term swallowing dysfunction.

Notably, in this study, patients reported that their swallowing returned to baseline after de-intensified treatment, and only 34 percent required a temporary feeding tube.

The results need to be validated in larger, randomized clinical trials, Chera said, and studies are ongoing to investigate this.

Chera said that researchers want to continue to improve two-year progression free response rates while achieving better side effect results. They want to do that by identifying additional biomarkers to drive precision medicine strategies.

Although traditional clinical risk help clinicians predict outcomes and select patients for clinical trials of de-intensified treatments, Chera said that these risk factors are imprecise. He and his colleagues are currently evaluating additional novel biomarkers that they believe could be used to better predict a patient’s prognosis and outline a course of treatment.

Life with MS disease seen through a computer