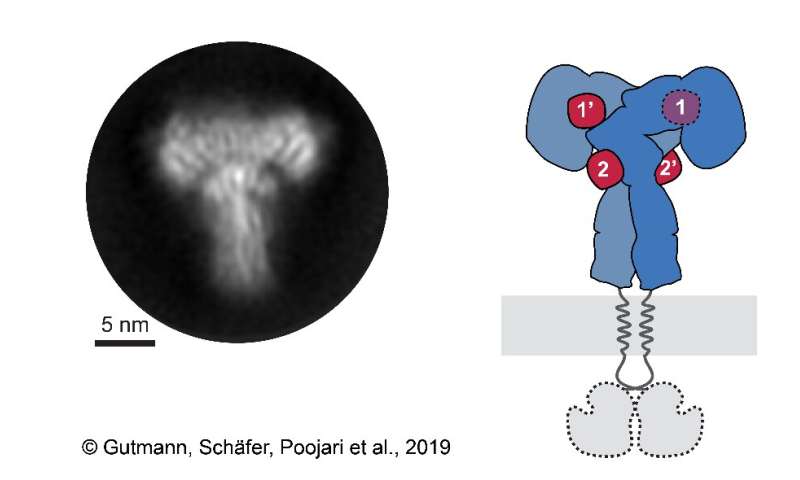 Since the discovery of insulin nearly 100 years ago, scientists have explored how it interacts with its receptor with the goal of improving the ability of therapeutic insulins to mimic the way insulin works in the body. In a new study, researchers have solved a critical piece of the puzzle by showing how insulin interacts with its receptor at a second binding site. The team of scientists from the Paul Langerhans Institute Dresden (a satellite of Helmholtz Zentrum München and a partner of the German Center for Diabetes Research) and the Faculty of Medicine Carl Gustav Carus at TU Dresden in Germany, together with colleagues from the Max Planck Institute of Biochemistry in Munich, Germany, McGill University in Canada, and the University of Helsinki in Finland will publish their results Nov. 14, 2019, in the The Journal of Cell Biology (JCB).

Previous studies have detailed the central role of insulin as a regulator of blood sugar and demonstrated its involvement in diabetes and other chronic conditions, including neurodegeneration and cancer. The biological actions of insulin are mediated by its receptor—the insulin receptor—which is localized on the cell surface.

“When insulin was administered to patients for the first time in the 1920s, it was a real breakthrough in the treatment of diabetes. However, it is still challenging to generate insulins that recapitulate the full spectrum of endogenous insulin action,” explains Dr. Ünal Coskun, group leader at the Institute for Pancreatic Islet Research (IPI) and Paul Langerhans Institute Dresden (PLID), a partner of the German Center for Diabetes Research (DZD). “The main reason for this is that we still do not understand enough about how insulin binds to its receptor and how this signal is transmitted inside the cell.”

Insulin was first proposed to bind to two different sites on its receptor 40 years ago. Although much is understood about the interactions that occur at the first of these sites, very little was known about what happens at second site. Understanding the different ways that insulin can interact with its receptor will allow researchers to design improved treatments for insulin-related disorders.

“The key was to examine the outer part, or ectodomain, of the insulin receptor after saturating it with high concentrations of insulin,” explains Dr. Theresia Gutmann, co-first author of the study from the Paul Langerhans Institute and the German Center for Diabetes Research.

Co-first author Dr. Ingmar Schäfer, from the Department of Structural Cell Biology at the Max-Planck Institute of Biochemistry (MPIB) adds, “We recorded over 8,000 electron microscopic images and analyzed over 300,000 single receptor particles, from which we could generate 2-D images of the “T”-shaped complex to reconstruct a 3-D image.”

This approach allowed the researchers to directly observe the binding of insulin to site 2 for the first time and to show how the insulin receptor changes its conformation to form a T-shaped structure. The receptor consists of two identical parts, each containing two insulin binding sites, so up to 4 insulin molecules were bound by a single receptor.

In parallel, the scientists used computational modelling and simulation approaches to understand these interactions on an atomic scale. “Computational techniques such as these are becoming increasingly important to analyze complicated dynamic processes in living cells, with the added advantage of allowing drug screens to be performed in silico,” says Prof. Ilpo Vattulainen from the Department of Physics at the University of Helsinki.

Snapshot of chikungunya could lead to drugs, vaccines for viral arthritis