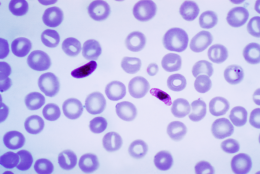 Within seconds after an infected mosquito bites, the malaria parasite navigates the host skin and blood vessels to invade the liver, where it will stay embedded until thousands of infected cells burst into the bloodstream, launching malaria’s deadly blood-stage infection.

Now, for the first time, a team from Seattle Children’s Research Institute describes how malaria Plasmodium parasites prepare for this journey as they lie in waiting in the mosquito’s salivary glands. Researchers say this knowledge may help identify new strategies to block transmission of the parasite—a critically important step needed for the eradication of malaria, a disease that continues to sicken over 300 million people and kill an estimated 435,000 people worldwide every year.

“Essentially the parasite makes a blueprint of the proteins it needs to infect the liver while still in the mosquito, far in advance of actually making the proteins once in the human,” said Dr. Stefan Kappe, the senior author on the paper published in Nature Communications and a malaria researcher in Seattle Children’s Center for Global Infectious Disease Research. “It’s cool biology that offers new insight into how we might begin to stop the parasite from infecting the liver.”

Researchers get a closer look at the parasite inside the mosquito

An effective vaccine to protect against malaria does not exist. To design interventions that will help win the fight against malaria, the Kappe Lab at Seattle Children’s is focused on understanding the complex biology of the malaria parasite and the host immune response to infection. They are exploring new strategies to protect against the multiple stages of infection that will not only prevent disease in infected individuals but break the cycle of human-mosquito-human transmission.

Together with Kappe’s expertise in the mosquito stages of the malaria parasite called sporozoites, Lindner and Swearingen applied their proficiencies in the study of RNA molecules and proteins. This allowed them to explore the sporozoites, which are ultimately transmitted to the human when the mosquito bites, in greater detail.

“We found that the sporozoites make and store all these plans for proteins, but then don’t actually make the protein,” Swearingen said. “It’s the first window into a process in which the proteins are only made once the parasite negotiates the liver environment, suggesting the proteins are needed for the parasite to infect the human.”

Kappe explains that this strategy gives the malaria parasite the adaptability it needs to launch its attack seconds after the mosquito bites.

“The parasite has planned ahead, gathering the tools it needs to infect the human while it’s sitting in the mosquito waiting for this unpredictable event to happen,” he said. “It may exist in this prepared state for days or even weeks until it has opportunity to strike in the human, so it has to be ready whenever this moment comes.”

According to Swearingen, the blueprint revealed in their research may ultimately lead scientists to new ways to disable the parasite.

Long-acting contraceptive designed to be self-administered via microneedle patch