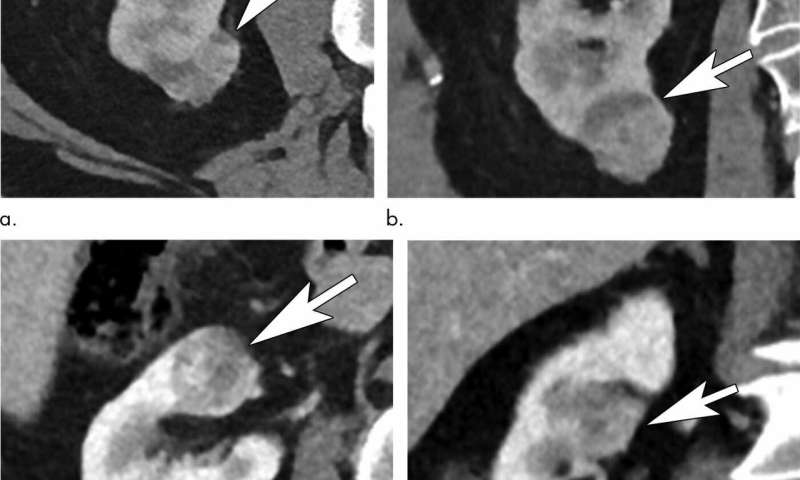 Personalized treatment plans may extend life expectancy for early-stage kidney cancer patients who have risk factors for worsening kidney disease, according to a new study published in the journal Radiology.

Kidney, or renal, tumors are often discovered at an early stage and are frequently treated with partial nephrectomy, a surgical procedure in which the tumor and part of the kidney are removed. However, some patients, including those with chronic kidney disease, are poor candidates for surgery.

“There may be clear-cut risks with an operation in these patients,” said study lead author Stella K. Kang, M.D., M.S., assistant professor of radiology and population health at NYU Langone Health in New York City. “Patients may have significant heart disease or other comorbidities, or a limited life expectancy for some other reason.”

In addition, many small renal tumors are either benign or very slow-growing malignancies, making active surveillance of the tumor—typically through periodic CT scans to watch for changes in tumor size—a viable option in patients who are poor candidates for surgery.

Despite its potential, active surveillance may be underutilized due to a lack of consensus guidelines and decision-support tools, according to Dr. Kang.

“We need a better way of weighing the risks, so that more patients can be considered for non-surgical management,” she said.

Computer-based simulations represent a promising tool in this process of risk stratification. For the study, Dr. Kang and colleagues constructed a simulation to assess the impact of different treatment approaches in patients with small renal tumors. The model accounted for important variables like the severity of the kidney disease and competing risks of mortality.

The model also found that the use of MRI to predict papillary renal cell carcinoma, a slow-growing type of kidney cancer, could potentially improve long-term health outcomes by steering some patients toward active surveillance.

The researchers hope the model will bring more value to the clinical decision-making process. Information from the model could provide guidance on the benefits and risks of active surveillance and help identify the right treatments for the right patients, according to Dr. Kang.

“There is probably a larger proportion of patients with small renal tumors who merit a fuller discussion of options than is currently recognized,” she said. “While the model does not prescribe one specific treatment, it does provide a set of estimates so that patients and providers can get more information on the viable options.”

The model also suggests that the effectiveness of biopsy, the tool used most often to discriminate between cancer and benign masses, may be improved by incorporating tumor subtype information into the decision-making process.

On a broader scale, the study shows how computer simulation models could add useful, supplemental information to knowledge gained from clinical trials. While randomized clinical trials remain the cornerstone of evidence-based medicine, their reach is often limited by the significant time and expense they require, and they represent only a limited set of patients.

Child anxiety could be factor in school absences, research concludes