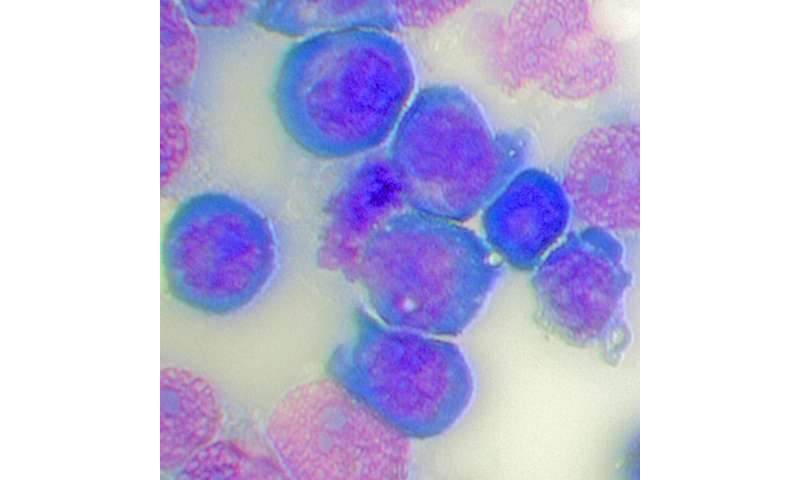 The only cure—a bone marrow transplant—often isn’t suitable for these very sick patients. Now, an international team of scientists report in Nature Cell Biology on a long-overlooked part of a leukemic cell’s internal machinery called the spliceosome, where they found a hyperactive form of a protein called IRAK4 that sends cells on a cancer-causing frenzy.

When they targeted the hyperactive form of IRAK4 in laboratory tests to block its function in AML cells, and in patient AML cells transplanted into immunosuppressed mice, the experimental treatment led to a significant reduction of the leukemic cells. It also prolonged survival in the animal models, according to Daniel Starczynowski, Ph.D., the multi-institutional study’s senior investigator and part of the Cancer and Blood Diseases Institute at Cincinnati Children’s Hospital Medical Center.

In this study and other projects in the lab, Starczynowki and colleagues are testing existing drugs that can target hyperactive IRAK4 in leukemia cells. They also are developing a prospective drug that more effectively inhibits hyperactive IRAK4 to treat AML and its precursor disease, myelodysplastic syndromes (MDS).

Starczynowski said that with additional preclinical research and development, the researchers would like within a few years to have their still-unnamed IRAK4 inhibitor ready for initial clinical tests in AML patients. The need for new treatments is urgent, he said.

“There is very little we can do for these patients. Even new drugs now getting fast-tracked through the development process may only produce another six months of survival,” Starczynowski said. “The curative option is a bone marrow transplant, but most of these patients don’t qualify. The field is really desperate for something that can help these patients.”

The findings in this study, including use of IRAK4-inhibiting drugs, would potentially affect a subset of about 20 percent of AML-MDS patients, according to researchers. But that’s significant, they say. Now that they know to look more closely at this seemingly obscure, tiny molecular machine in the cell’s nucleus—the spliceosome—it creates a way to find genetic coding miscues that fuel other subsets of AML that also depend on a hyperactive IRAK4.

Sequencing in the Spliceosome

Although invisible to the naked eye, the spliceosome is important. In a process of dicing and splicing, the spliceosome edits out unnecessary snippets of RNA coding called introns or exons. It then splices the loose snipped ends of RNA back together so specific proteins will do their jobs correctly.

But in AML cells, there are mutations in a gene call U2AF1, which result in RNA splicing errors. When U2AF1 functions normally, the correct snipped ends of RNA are glued back together. But when a mutated form of U2AF1 produces incorrectly formed RNA molecules of IRAK4, it results in a version of IRAK4 protein with extra coding sequences called IRAK4-L (or long). Together they hijack the innate immune system’s molecular processes and trigger oncogenesis in myeloid blood cells.

Including first author Molly Smith, a graduate student and member of the Starczynowski lab, the study was a collaboration of eight institutions in the U.S. and the University of Oxford in England. The focus on IRAK4 started over five years ago when Cincinnati Children’s cancer biologist Kakajan Komurov—working on a separate research project—noticed that every time he analyzed cancerous cells from patients, he saw high levels of the IRAK4 protein with extra coding sequences.

After Komurov shared his observation with Starczynowski during a chance corridor encounter at work, they launched a new project that went on to include Cincinnati Children’s bioinformatician Nathan Salomonis, Ph.D., and Gaurav Choudhary, Ph.D., and Amit Verma, MD, at the Albert Einstein College of Medicine in Bronx, NY.

Also collaborating are investigators from the National Institutes of Health (NIH), the University of Cincinnati, and the Department of Medicine at Washington University in St. Louis.

Together the team was able to combine biological testing of leukemia models in the lab and a global analysis of genetic sequencing data by using bioinformatics and systems biology. They also were able to analyze data from the NIH’s massive Cancer Genome Atlas, essentially a digital encyclopedia of all the genes (and the known related processes) linked to cancer.