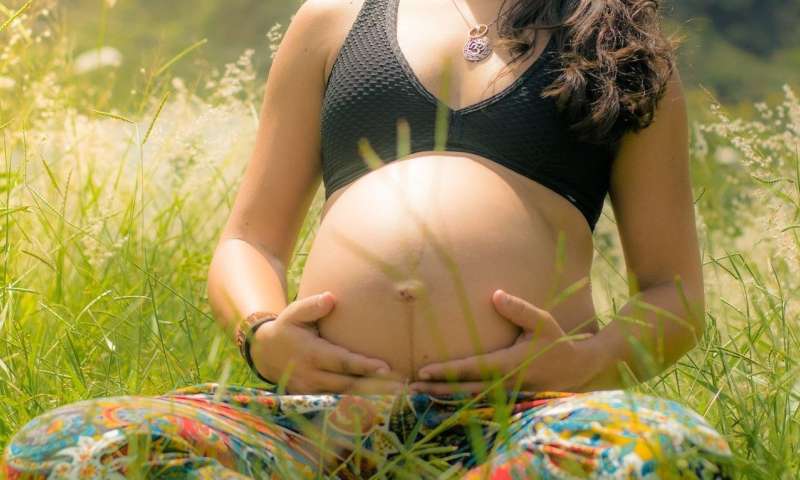 Pregnant women who use cannabis may slightly increase the risk their unborn child will develop psychosis later in life, suggests new research from Washington University in St. Louis.

“Our research shows that prenatal marijuana exposure after maternal knowledge of pregnancy is associated with a small increase in psychosis proneness during middle childhood or about age 10,” said Jeremy Fine, an undergraduate majoring in psychological & brain sciences in Arts & Sciences at Washington University and the study’s lead author.

The findings come on the heels of several national studies documenting a dramatic increase in marijuana usage by pregnant women, including a 2018 study from Washington University School of Medicine in St. Louis that found past-month marijuana use among pregnant mothers in the United States increased by 75 percent between 2002 (2.85 percent) and 2016 (4.98 percent).

As more states legalize medicinal and recreational use of cannabis, other reports suggest that many marijuana dispensaries commonly suggest cannabis as a natural cure for pregnancy related nausea.

This latest study, published March 27 in the journal JAMA Psychiatry, suggests that pregnant women should be discouraged from using cannabis at any time in their pregnancy because so little is yet known about its health effects.

But its findings also raise new concerns that prenatal exposure to cannabis may pose a greater risk after the fetal brain begins to develop a receptor system for endocannabinoids, which are part of the naturally occurring neurotransmitter network through which cannabis affects the brain.

“One possible explanation for the finding of increased psychosis risk for marijuana use following, but not before, knowledge of pregnancy is that the endocannabinoid receptor system may not be in place during the early weeks of pregnancy,” said Ryan Bogdan, associate professor of psychological & brain sciences and senior author of the paper. “Prenatal cannabis exposure may be associated with later psychosis proneness in offspring only when there is sufficient fetal endocannabinoid type 1 receptor expression, which may not occur until after many mothers learn they are pregnant.”

Bogdan, who directs the Washington University BRAIN Lab where the research took place, said these latest findings build on other basic research suggesting that endocannabinoid signaling may contribute to processes, such as neurogenesis and neural migration, that play important roles in early development of brain structure and connections.

“This study raises the intriguing possibility there may be developmental windows during which cannabis exposure may be more likely to increase psychosis risk,” he said.

Tetrahydrocannabinol (THC), which is the principal psychoactive component of marijuana, mimics our body’s endocannabinoids and binds to endocannabinoid receptors to exert its effects. Various studies have confirmed that THC crosses the placental barrier to gain access to the developing fetus.

“Data from rodent studies suggest that the endocannabinoid type 1 receptor, through which the psychoactive effects of THC largely arise, is not expressed until the equivalent of 5-6 weeks of human gestation,” Fine said. “Given that mothers in our study on average learned of their pregnancy at 7.7 weeks, it is plausible that any impact of THC on psychosis risk would not arise until sufficient endocannabinoid type 1 receptors are expressed.”

The BRAIN Lab findings are based on data from the Adolescent Brain Cognitive Development (ABCD) study, an ongoing longitudinal study of child health and brain development with data collection sites throughout the nation. They used data from the initial ABCD baseline data release which included survey responses from 3,774 mothers about marijuana usage during 3,926 pregnancies. Risk of psychosis in the 4,361 children born from these pregnancies between 2005 and 2008 was measured using a questionnaire administered to the children between ages 8.9 and 11 years.

Among the 4,361 children sampled in this study, 201 (4.61 percent) were reported to have been exposed to marijuana before birth. Of these, 138 were exposed only before mothers knew they were pregnant; two were exposed only after the mother knew she was pregnant.

Bogdan and his co-authors acknowledge that the study has many limitations, including the small sample of prenatal cannabis-exposed offspring; potential maternal underreporting of use during pregnancy; imprecise data on timing, amount, frequency and potency of cannabis exposure; absence of data on whether childhood psychosis proneness is associated with conversion to psychosis; and lack of data on some potential confounders, such as maternal stress and genetic risk of psychosis among parents.

“Our research is correlational and as such cannot draw causal conclusions,” said Allison Moreau, study co-author and a graduate student in psycholody at Washington University. “However, that the relationship between prenatal marijuana exposure following maternal knowledge of pregnancy was associated with offspring psychosis proneness after accounting for potentially confounding variables—such as maternal education, prenatal vitamin usage, prenatal alcohol and nicotine use, child substance use, and so on—increases the plausibility that prenatal cannabis exposure may contribute to a small risk of increased psychosis liability in children.”

Among older women, 10,000 steps per day not needed for lower mortality