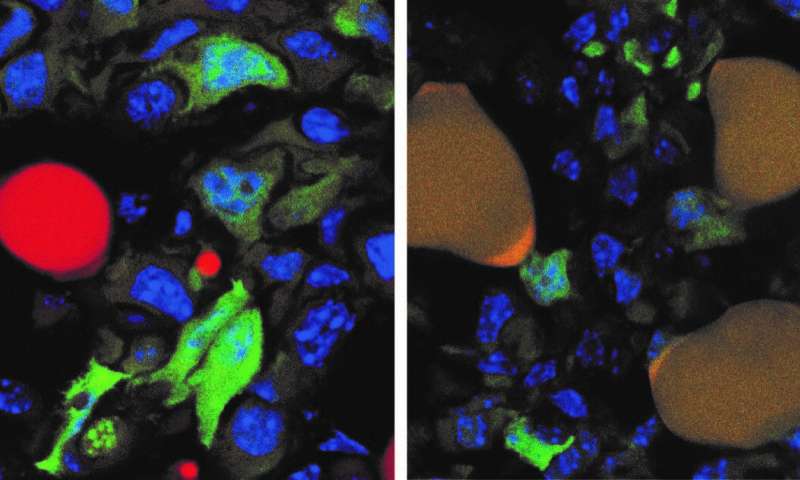 As cancer cells respond to cues in their microenvironment, they can enter a highly plastic state in which they are susceptible to transdifferentiation into a different type of cell. Researchers at the University of Basel in Switzerland exploited this critical phase, known as an epithelial-mesenchymal transition (EMT), to coax breast cancer cells in mice to turn into harmless fat cells. The proof-of-concept study appears January 14 in the journal Cancer Cell.

“The breast cancer cells that underwent an EMT not only differentiated into fat cells, but also completely stopped proliferating,” says first author Gerhard Christofori, professor of biochemistry at the University of Basel. What’s more, the primary tumor did not metastasize. “As far as we can tell from long-term culture experiments, the cancer cells-turned-fat cells remain fat cells and do not revert back to breast cancer cells,” he says.

Epithelial cells undergoing EMT regress from terminally differentiated cells to a more immature state reminiscent of stem cells. EMT is essential for embryonic development, during which stem cells differentiate into a variety of cell types throughout the body, and for tissue regeneration such as wound healing. EMT and the inverse process, mesenchymal-epithelial transition (MET), are implicated in cancer’s ability to metastasize.

Cells undergoing EMT or MET, Christofori says, are in a highly changeable state, providing a window of opportunity for therapeutic targeting, which the researchers tested in mouse models for metastatic breast cancer created by transplanting human breast cancer cells into the mammary fat pad of female mice.

When these mice received doses of two FDA-approved drugs—a cancer inhibitor and an anti-diabetic drug—their invasive cancer cells changed into fat cells. The drugs also suppressed the growth of primary tumors in the mice and prevented the tumors from metastasizing throughout the animals’ bodies.

In particular, the researchers targeted a handful of aggressive cancer cells that had left the primary tumor and invaded surrounding tissue. These cells, which most likely had undergone an EMT, were readily converted to fat cells, while the remaining cancer cells within the tumor were no longer able to proliferate unchecked.