A woman who became jealous and paranoid that her ex-boyfriend was chatting to other girls in fact had a rare brain condition that left her psychotic.

Evie Moore, 23, said she became ‘animalistic’ while in hospital, hallucinating that she was ‘the Messiah’ and even forgetting who her parents were.

She was diagnosed with encephalitis, a condition which causes the body’s immune system to attack healthy brain cells.

In the months leading up to her diagnosis at the end of 2015, the council worker, from Cirencester, Gloucestershire, became ‘totally disorientated’.

She was rushed to hospital when she had a seizure in her parents living room, leading to doctors putting her in an induced coma, fighting for her life.

Miss Moore’s relationship broke down during her nine week stay in hospital, whereby she gained six stone from steroid medication to reduce the inflammation in her brain. 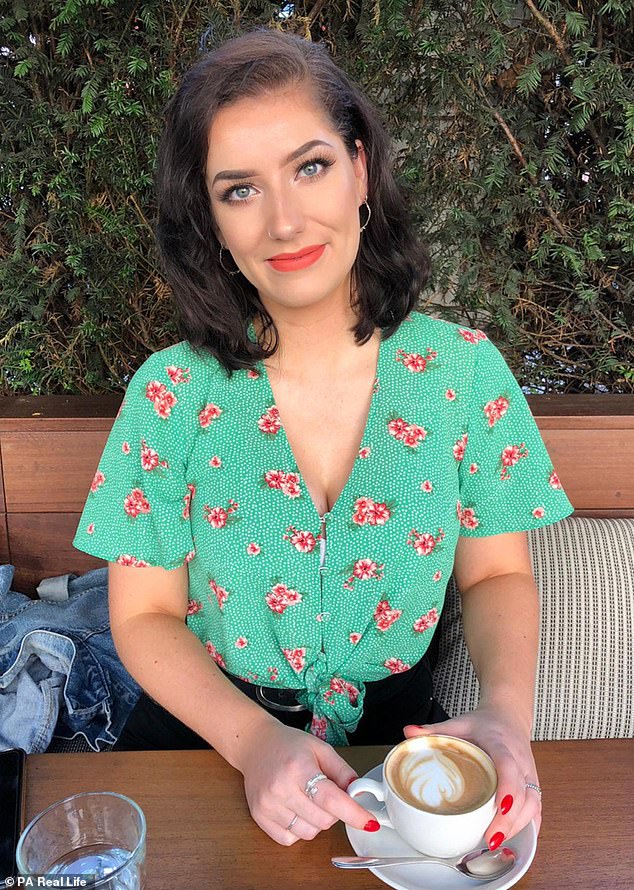 Evie Moore, 23, of Gloucestershire, said she became ‘animalistic’ while in hospital in 2015, hallucinating that she was ‘the Messiah’ and even forgetting who here parents were 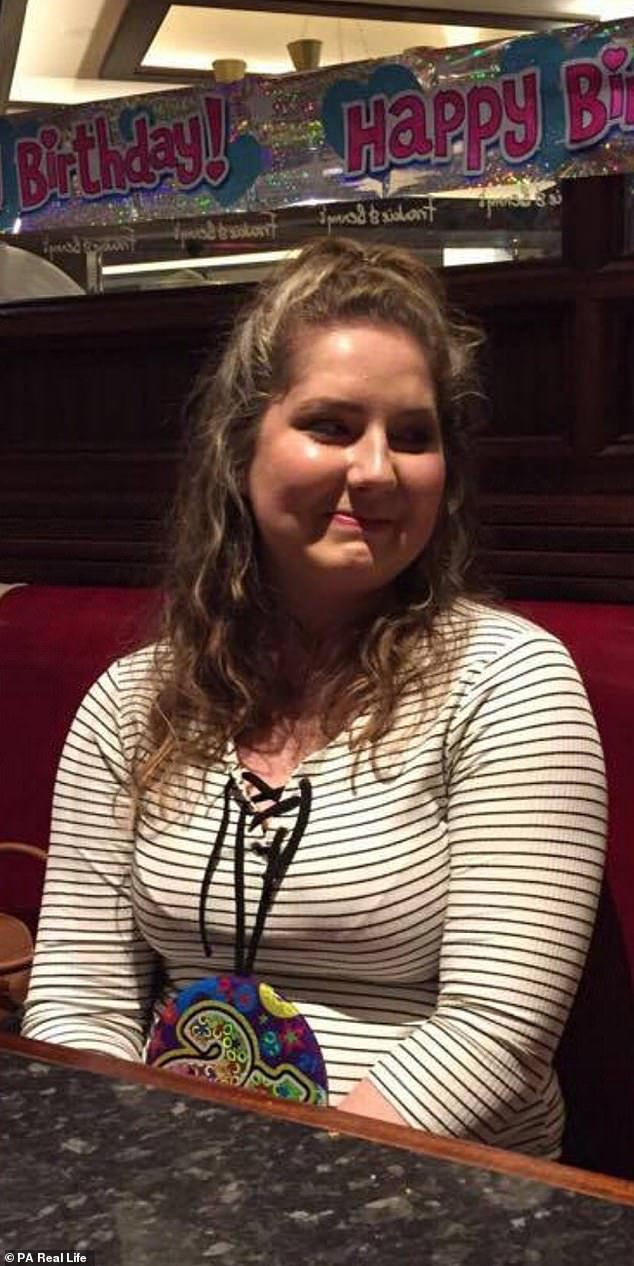 In the months leading up to diagnosis, Miss Moore became ‘totally disorientated’ and paranoid that her ex-boyfriend was chatting up other women. Her relationship ended while she was in hospital. Pictured, after steroid medication which led her to six stone of weight gain

Encephalitis is rare and affects approximately 4,000 people in the UK each year, according to Brain and Spine Foundation.

Despite not being religious, Miss Moore was convinced she was ‘a messenger from God’.

She said: ‘I remember lying on the floor next to my hospital bed and creating the sign of the cross.

‘Then, when the junior doctor came to see me, I’d say, “Hello, I’m a messenger from God and I’ve been sent from heaven”.’

Encephalitis is an uncommon but serious condition in which the brain becomes inflamed (swollen).

It can be life-threatening and requires urgent treatment in hospital.

Anyone can be affected, but the very young and very old are most at risk.

Encephalitis sometimes starts off with flu-like symptoms, such as a high temperature and headache, but these don’t always occur.

More serious symptoms develop over hours, days or weeks, including: confusion or disorientation, seizures (fits), changes in personality and behaviour or loss of consciousness.

Dial 999 for an ambulance immediately if you or someone else has these more serious symptoms.

It’s not always clear what causes encephalitis, but it can be caused by viral infections. Several common viruses can spread to the brain and cause encephalitis in rare cases, including the herpes simplex virus (which causes cold sores and genital herpes) and the chickenpox virus.

Before September 2015, when she was struck down with encephalitis, Miss Moore was a fit and healthy 20-year-old woman, who ate well and visited the gym regularly.

She was happily living with her then boyfriend, who she does not wish to named, in Stroud, and working as a customer service assistant at an energy company.

For a few months before the attack, Miss Moore started experiencing out-of-character feelings of jealousy and paranoia.

She said: ‘In the three months before encephalitis hit me, I was becoming paranoid and was getting worked up about things that wouldn’t normally bother me.

‘For no reason at all, I was getting really worried about my boyfriend at the time speaking to other girls, which never used to bother me before.

‘And looking back now, that was clearly the beginning of it.’

Her condition deteriorated rapidly, and at the end of September 2015, Miss Moore was confined to her bed with flu.

At home on her own while her boyfriend was out one evening, she called her parents who immediately sensed something was wrong.

Her father, Ivan, 53, an orthopaedic engineer, immediately drove to her house and brought her back to the family home in Tetbury, 11 miles (17km) away. 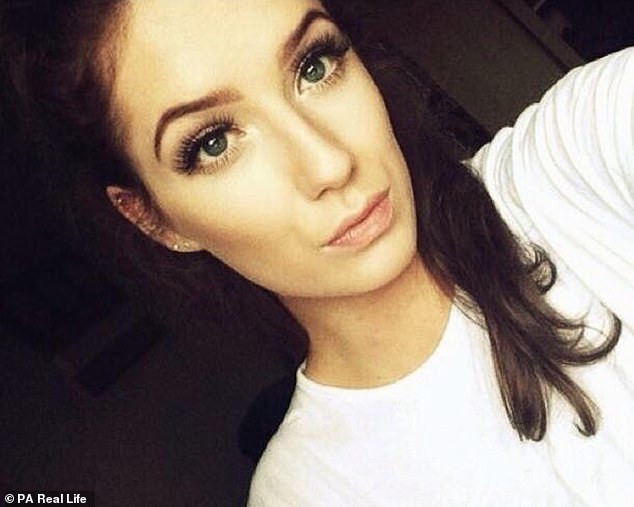 Before September 2015, when she was struck down with encephalitis, Miss Moore was a fit and healthy 20-year-old woman, who ate well and visited the gym regularly. Pictured in 2014 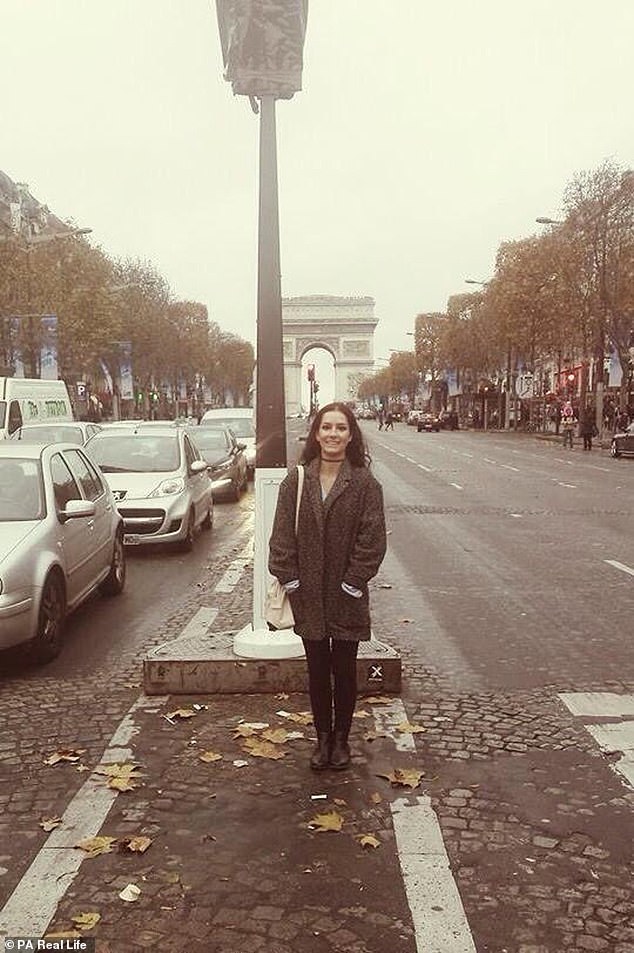 Miss Moore, pictured before she became ill, was living with her ex-boyfriend, who she does not wish to name, when the signs of her illness started to show 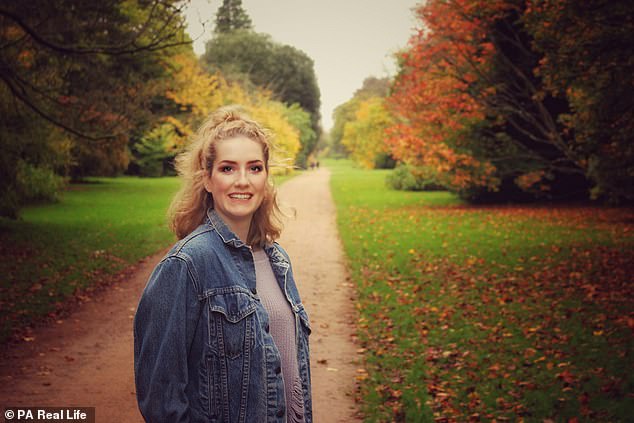 Miss Moore was struck with the flu before having a seizure in her parents living room. She was rushed to hospital and put in an induced coma. Pictured in 2017 while recovering at home

Miss Moore said: ‘Mum and Dad knew something wasn’t right with me, as I was very distressed and out of sorts.

‘It was becoming apparent that this wasn’t just flu. They were on tenterhooks.’

Then suddenly, Miss Moore started having a seizure in their living room, her eyes rolling back into her head and her mouth foaming.

Frantic and unable to bring her out of the seizure, her parents called an ambulance.

Paramedics immediately defibrillated her once she was in the ambulance to kick-start her heart and bring her back to consciousness.

Miss Moore was rushed to Gloucestershire Royal Hospital 20 miles (32km) away in Gloucester, where she was put into an induced coma for 48 hours to reduce the damage to her brain caused by the seizure, which doctors were unsure of the cause of.

She said: ‘My memory from then has all pretty much gone and I’ve had to piece it together from what my parents and younger sister Ruby, 19, have told me.

‘But I do remember coming to and looking at the catheter bag at the end of my bed, thinking, “How strange, I wonder what could have happened?” and then feeling a horrible pain from where I’d bitten my tongue during the seizure.’

Totally disorientated, when her family came to visit her she did not recognise them and was barely able to form sentences.

Gradually, over a week in hospital, her memory and faculties returned with the help of steroids to reduce the brain inflammation.

Miss Moore, pictured on her 21st birthday, was given steroid treatment to reduce the inflammation in her brain. She ballooned from 8st to 14st within ten months 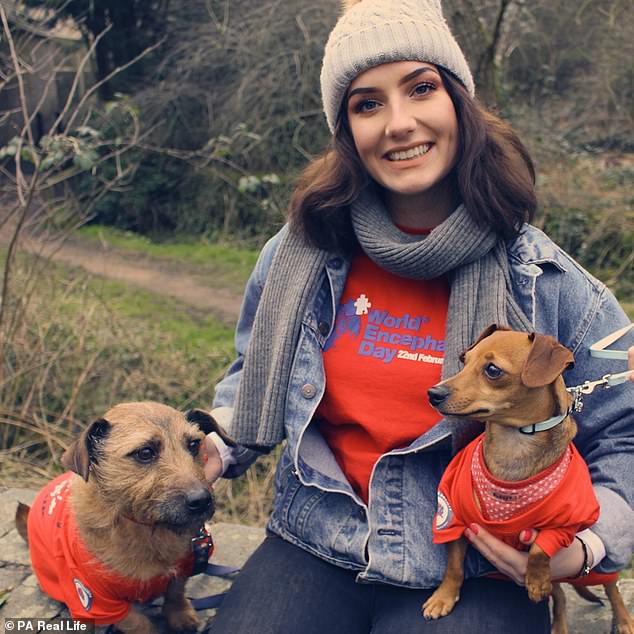 Pictured with her two dogs, Miss Moore was worried she would never find love again after her ex-boyfriend broke up with her because he could not cope with her psychosis 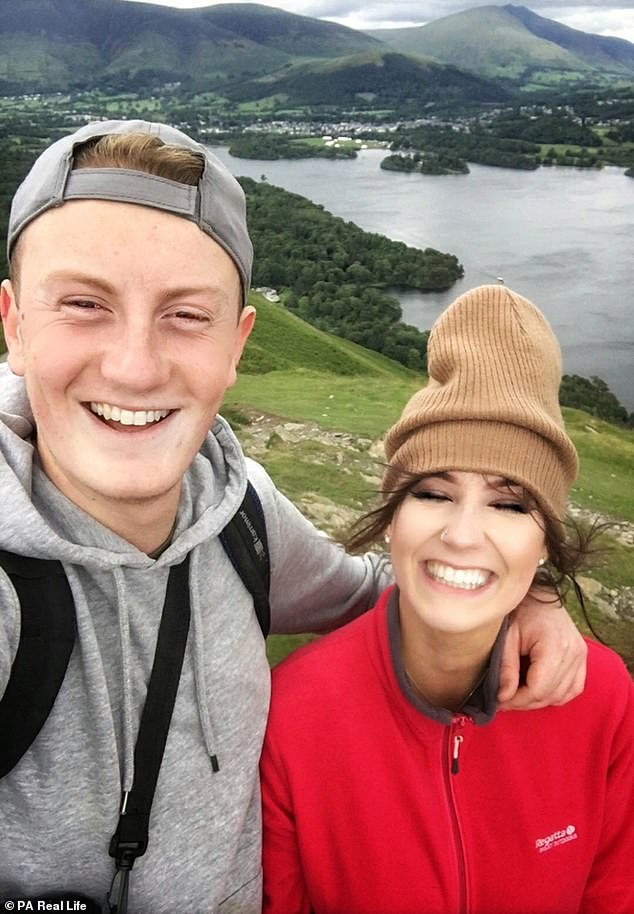 Miss Moore was allowed to return to the flat she shared with her then boyfriend, having never been given confirmation of what had prompted her mysterious seizure.

Still confused, she was advised to have someone with her for the first two weeks. She could not leave the flat without quickly becoming so overwhelmed.

Miss Moore said: ‘I started becoming delusional. Once, I was watching the news on TV completely petrified, as I thought that I was there in the war zone that they were reporting on.’

Things came to a head a week after going home when, lying in bed beside her boyfriend one night, she was suddenly struck by the thought that her mother Alison, 52, who works at a dry cleaners, was dead.

She recalled: ‘I sat bolt upright and was totally convinced she had died, as if someone had just told me, and started getting ready to leave the flat and go to my parents’ in the middle of the night.

‘It was clear then that I needed to be back in hospital again.’

Miss Moore was diagnosed with psychosis, a common symptom of encephalitis, which usually develops a few weeks after the initial seizure.

‘I became animalistic,’ recalled Evie, who was eventually diagnosed with encephalitis after two weeks back in hospital at Gloucestershire Royal Hospital, under observation.

‘I had no knowledge of who I was anymore.

‘The medics put me in a room on my own and I could see the birds flying outside and thought that I could, too.

‘I was desperately trying to jump out of the window and fly and my dad using all his force to pull me back.

‘I turned around and just shouted “F*** off”, and I remember seeing him tear up at those words.’

Despite the sudden change in Miss Moore’s behaviour and personality, her parents tried to be as comforting and helpful as they could, visiting her every day and humouring her often incoherent conversations.

Unfortunately, her relationship did not survive, as two weeks before the end of her nine week stint in hospital, her boyfriend confessed he could not cope with the change in her.

‘The illness had really altered who I was, and I think for a young relationship that was too much of a strain,’ Miss Moore said.

‘He came to visit me and started crying and we both decided it wasn’t right any more.

‘He left and I closed my curtains and just started sobbing my eyes out.

‘After the breakdown of my last relationship, I stopped looking for love because I was worried that my illness would mean we just broke up again.’

When she was finally discharged, Miss Moore moved back in with her parents and, while her psychosis diminished, she could not work for 18 months because of exhaustion and disorientation.

‘For a long time I had to rely on my mum to help me get dressed in the morning and put my make-up on,’ said Miss Moore.

She ballooned from 8st to 14st within ten months because of steroid treatment. 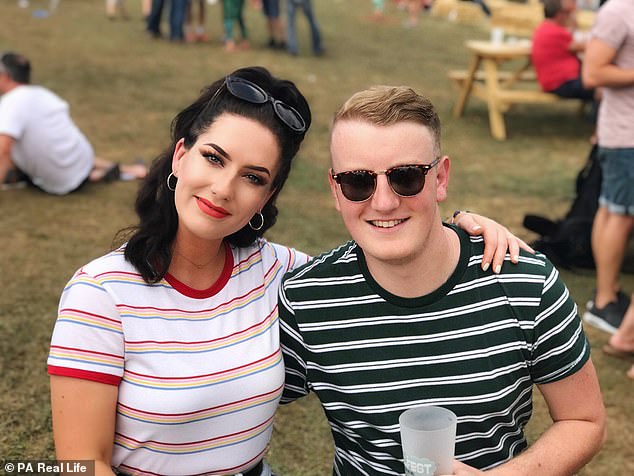 Miss Moore said about her boyfriend: ‘He’s really tried to change things for me and help me to recover. That has been so important in getting over this nightmare’ 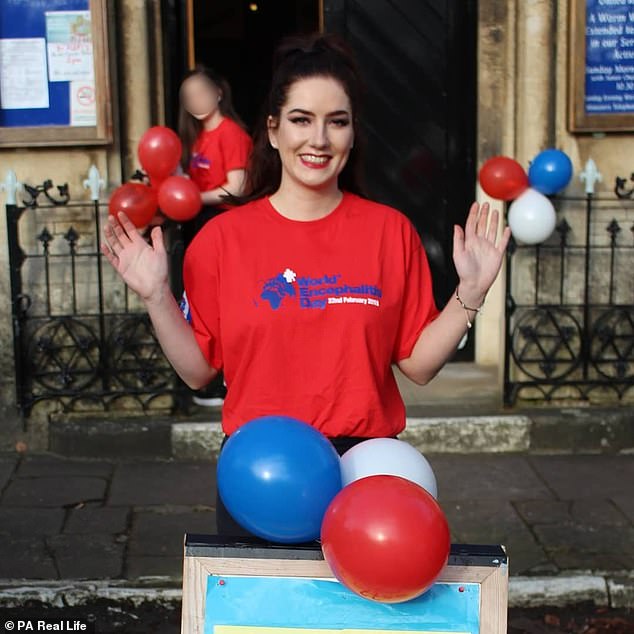 Pictured on World Encephalitis Day last year, Miss Moore said although she feels back to normal, encephalitis has left her with some personality changes

She said: ‘I felt so tired all the time, but my parents were amazing in getting me up and doing things so that I didn’t just sit around and wallow. And that really helped me get off my feet both emotionally and physically.’

At first taking a part-time job as a shop assistant, in November 2017, Miss Moore was able to go back to working full-time as a sales consultant at travel agent Thomas Cook.

Then, in February 2017, despite vowing not to get involved with another man, she met sales assistant George Moore, 25, who had gone to her school.

Miss Moore said: ‘I told him all about my encephalitis and what had happened to me on that first date.

‘He was brilliant and really encouraging. I fell in love with George and he made me feel so much better.

‘He’s really tried to change things for me and help me to recover. That has been so important in getting over this nightmare.

‘Sometimes I might seem a little strange, but he just said how brilliant he thought I was to have come through it all, and that made me feel really good in myself.’

Miss Moore believed encephalitis changed her personality, as although some people will make a good recovery, it can cause persistent problems.

Miss Moore said: ‘It’s very upsetting, because I feel like I am better and I am back to normal, but I know that something has changed and my mum and dad sometimes comment on things that I might say that before I wouldn’t have done.

‘Now that I am recovering and have George at my side, I am completely comfortable in myself again.’

This is how often—and for how long—you should exercise, according to a personal trainer