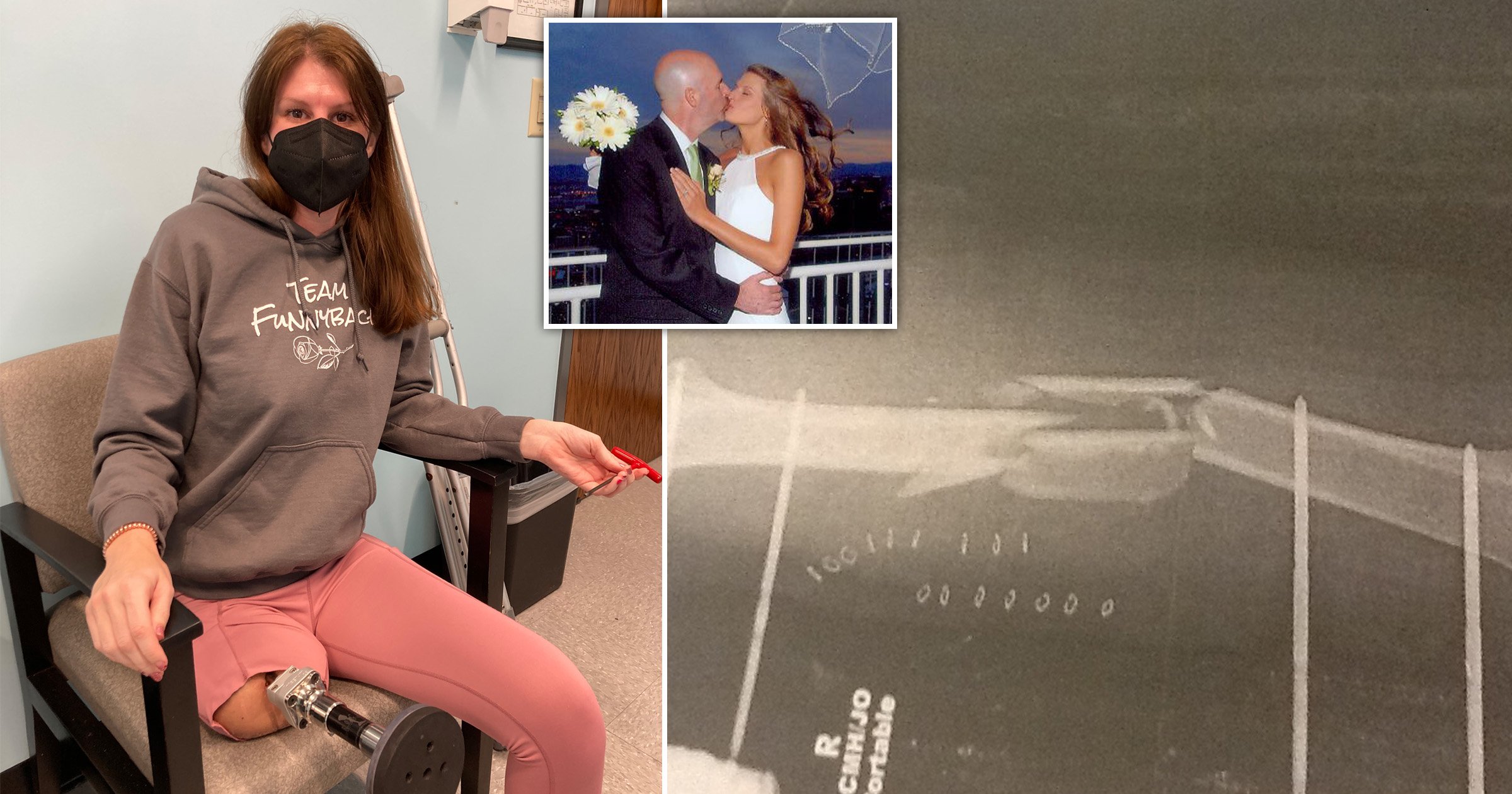 Gini Thomas’ entire world changed forever on August 12, 2012 at the intersection of Hill Street and Fairview Avenue in Montgomery Alabama.

A driver ran a stop sign and collided with the motorcycle Gini and her husband of 17 months, musician Joe Thomas, Jr, were riding.

The crash took not only her leg but her husband’s life as well.

Even though Gini lost her partner and went on to endure 20 surgeries on her leg before the eventual amputation, she’s ultimately still grateful for where she is in life today and has built herself up into an advocate for others with disabilities.

‘I am so blessed,’ said Gini, 37. ‘I could probably write a book about all of the people who have supported me over the last ten years. I have an amazing family who was willing to drop anything to help me in my recovery.

‘My mom even lost her job because she would not leave my side after one of my surgeries. The doctors I worked for at the time of the wreck gathered funds to help support me. They made sure I did not lose my health insurance.

‘My friends called, texted, sent food, got me out of the house, and made sure I didn’t sink too far down into depression. My dog, Scooter, has snuggled me and dried so many tears. I am so fortunate.

‘It’s really hard to NOT feel grateful. Yes, I experienced something incredibly tragic and painful, but I’ve had so many amazing experiences and opportunities since then.

‘I’ve met so many wonderful doctors, nurses, therapists, prosthetists, and patients/other amputees who have enriched my life. Right after the wreck, there were plenty of days I wanted to die. I’m so glad I’m still here.

‘This may seem strange, but I think losing my leg gave me MORE confidence. People are always going to stare. Instead of hiding, I decided to fully embrace being an amputee.

‘I have the opportunity to prove that losing a limb does not have to be the end of the world. I’ve worked hard to regain mobility, and I want to flaunt my abilities.’

Gini has learned to walk again and actually ended up working as a sales representative for the company that fit her very first prosthesis.

She became aware after the crash that general accessibility for wheelchairs is poor, so she advocated for wheelchair users and shares her personal osseointegration journey on TikTok in a bid to help others and raise awareness.

Gini also moved home to help care for her mother, who has dementia, and her little brother, who has Downs syndrome – all while grieving the loss of the love of her life.

‘I was born and raised in Montgomery, AL,’ she said. ‘I have two brothers, one older, one younger. My younger brother has Downs syndrome.

‘I met my husband in 2007. He was a musician and happened to be playing on stage at a bar I went to with some friends. He came over to talk to me during one of his breaks, and there was instant chemistry. He proposed in 2010, and we were married March 12, 2011 in Las Vegas.

‘When the wreck happened, I was a medical assistant at a pain management clinic. Ironic, I am now a patient at the same clinic.

‘On August 12, 2012 at the intersection of Hill Street and Fairview Avenue in Montgomery a young man driving a Mercury Grand Marquis ran a stop sign and collided with the motorcycle my husband and I were riding.

‘I blacked out when we were hit, and I’m not sure how long I was unconscious, but when I came to, I was sitting in the middle of the street and there was a man wiping blood from my face with a towel.

‘He lived in a house near the intersection where the wreck happened, and he was sitting on his porch and saw everything. He was very kind and gentle, and did his best to keep me calm.

‘When paramedics arrived, it took five of them to load me onto the stretcher, not because I am heavy, but because my leg was so severely broken in so many places.

‘I wish I really knew everything that went into saving my life. I’m not sure how I survived when my husband, Joe, died.

‘My helmet had been knocked off, his was still on. Somehow, his neck snapped and mine did not. I truly had an amazing team of trauma doctors and nurses who put me back together, physically and mentally.

‘I broke every bone in my right leg in multiple places and had several open fractures. Since then, I have had 20 surgeries on my right leg. I lost a lot of blood initially and had a pretty bad head injury. I was not given any blood at the first hospital that treated me.

‘By the time I arrived at the second hospital the next day, all of my numbers were so critically low that I would have been dead if I had not already been on a ventilator.

‘I received transfusions immediately, but remained on the ventilator for a week after the wreck.’

After going through all those surgeries, even though doctors told her she may have been able to use her leg again in future, the pain was too much so Gini opted for amputation.

‘The first time I spoke with my surgeon, he explained that amputation was always an option, but he thought I had about a 60% chance of my limb being functional again,’ she said.

‘It would just take a lot of surgeries. He told me he would do whatever I wanted, and if I decided to amputate at any point, he would honour my wishes.

‘After three years and 11 salvage surgeries, I was in constant pain, taking painkillers, muscle relaxers, antibiotics, antidepressants, etc. all day every day. I was miserable. I decided I would be more functional without the limb.

‘In the summer of 2015, I decided to ask for an amputation. My surgeon had me talk with a few other doctors to be sure there was nothing else to try, just so I would have peace about my decision.

‘Above the knee amputation was August 18, 2015. After my initial fitting for a prosthesis in 2016, it took about three to four months to walk without crutches or a cane.’

Her recovery journey was a long one, and it was tragically punctuated by her mother’s failing health.

Gini realised she needed to opt for osseointegration, which is when an implant is surgically embedded in the joint, to allow her to walk again, because she wasn’t able to help her dad with the physical work of caring otherwise.

She said: ‘It was a really rewarding experience to come alongside other patients as they went through their amputation journey.

‘When I began having problems with my femur and could no longer use my traditional socket prosthesis, I was terminated from that job,’ she said.

‘I eventually moved back to Montgomery in October of 2020. My mother had been diagnosed with dementia and was declining rapidly. My dad was struggling to take care of her, my brother, and himself.

‘I moved back to help in any way I could, even though I was on crutches and could not do very much physically.

‘I did not walk for three years prior to having osseointegration, so all of the muscles around my hip atrophied significantly.

‘Osseointegration was FDA approved in the United States in 2020, and I was fortunate enough to find a surgeon in Atlanta, Georgia (about 2.5 hours away from Montgomery) who was able to do the implant.

‘Osseointegration was completed at Emory Hospital in Atlanta, Georgia on January 27th, 2022, and I started attaching my full prosthesis at the end of April. I’m still using a cane to walk more than a few steps, but getting stronger every day.

‘I think I should be able to walk without any aids by the end of this year.

‘Once I am fully functional again, I am hoping to go back into a job in the medical/prosthetics field so that I can support others going through a similar journey.’

Gini has also become an advocate for people with disabilities, even doing a few modelling shoots.

‘I’ve been fortunate in that I have not experienced much discrimination. I will say that there are still many facilities that are difficult to access when using a wheelchair,’ she said.

‘I was required to use the wheelchair for a few weeks or even months after some of my surgeries. There were plenty of times when I was invited out and decided to stay home because I knew the wheelchair would be a hassle.

‘I have had TikTok censor or remove several of my videos because they say that showing my osseointegrated implant is too graphic. It’s unfortunate because I am not showing any blood or drainage. I am simply trying to educate and answer common questions about osseointegration.

‘I never really considered modelling before, but when the right people reach out and have an empowering message they want to share with my image, I absolutely cannot turn that down.

‘I have done a photoshoot for the Commit to the Song documentary with Josh Carples and recently an underwear shoot for Grail Bra Specialists with Heather Larkin. I don’t know if I can call myself a model just yet.’

And to those who might be going through something similar, Gini said: ‘Don’t panic, and always look for the good. Bad things happen to people every day, and most of the time it’s out of our control. The only thing we can control is how we respond to each situation.

‘That doesn’t mean we can’t feel sad or scared or angry. Those emotions are valid. Honour those emotions, but don’t let them take over.

‘On my worst days, I will make a list of bad things and good things in my life. The good always far outweighs the bad. Don’t get bogged down by the bad, and appreciate the good.’

Long Covid: Singing could help to alleviate symptoms of the condition – study

CDC: All Adults Should Be Eligible for Pfizer, Moderna Boosters