Typically, when a woman becomes pregnant, her body kick-starts several biological processes aimed at preventing a concurrent pregnancy, including releasing hormones to stop ovulation. But in rare instances, a pregnant woman could continue to ovulate, or release an egg, and that egg could then be fertilized by sperm and implanted in the uterus, Live Science previously reported. This rare phenomenon, in which two fertilized eggs are implanted in the uterus at different times, is known as “superfetation.”

In this new case, the twins were conceived three weeks apart, according to Good Morning America. The mother, Rebecca Roberts, was 39 years old and became pregnant for the first time last year after trying to conceive for several years and taking fertility medication.

At 12 weeks gestation, doctors discovered a second baby in an ultrasound that had a three-week size difference from the first baby. Because superfetation is so rare, at first Roberts’ doctors could not explain the size difference between the two babies.

“My initial reaction was how had I missed the second twin,” Dr. David Walker, an OB-GYN at Royal United Hospital in Bath, told Good Morning America. “And following this [I] was slightly relieved that it was not my mistake but a quite extraordinary pregnancy.”

The doctors diagnosed Roberts with superfetation and told her that the younger baby might not survive. When Roberts was 33 weeks pregnant, last September, the doctors induced labor because the younger twin, Rosalie, stopped growing properly due to a problem with the umbilical cord. 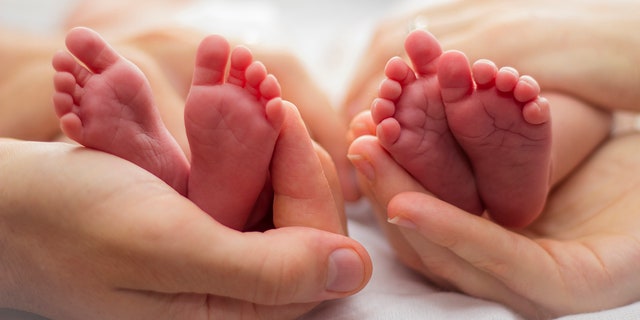 In other animals — such as fish, hares and badgers — superfetation is actually common.
(iStock)

The older twin, Noah, stayed in a neonatal intensive care unit (NICU) for three weeks, and Rosalie stayed for 95 days. Both infants are now home and healthy.

WHAT IF HUMANS DIDN’T HAVE AN APPENDIX?

“When we lay them down next to each other, it’s like they instantly know — and they reach out and touch each other’s faces, and it’s just the most beautiful thing,” Roberts told Good Morning America. “Twins have an amazing bond anyways, but the story between these two, when they’re old enough to find out, they’ll feel even more special.”

It’s not clear how many cases of superfetation occur; many cases may go undetected because the fetuses are so close in age, and thus size, that they’re thought to be ordinary twins, according to the Live Science report. Most known cases of superfetation involve patients who used assisted reproductive techniques such as in vitro fertilization, according to Healthline.

Still, the phenomenon is thought to be extremely rare, because three separate, improbable events must take place for it to occur: ovulation (which is usually stopped by pregnancy hormones), fertilization (which is usually stopped early in pregnancy when a “mucus plug” forms to stop the sperm from passing through the cervix) and implantation (which requires enough space for another embryo in the uterus, as well as hormones that normally wouldn’t be released once someone is already pregnant), according to Healthline. But in other animals — such as fish, hares and badgers — superfetation is actually common.

Using A Neti Pot Is Kind Of Strange, But It Could Be Exactly What Your Congested Self Needs