Home » Health News » Where will the world’s next Zika, West Nile or dengue come from?

Where will the world’s next Zika, West Nile or dengue come from? Scientists release a series of ‘hot-spot’ maps to warn of the regions most likely to harbour killer viruses

The countries most likely to be responsible an outbreak of a contagious killer virus such as Zika or dengue have been revealed by scientists.

Researchers have created heat maps to show viral hot-spots around the world, by working out which animals are most likely to spread illnesses and where.

The maps show where existing flaviviruses – infectious viruses spread mostly by mosquitoes and ticks – or similar new ones are most likely to surface and spread in the future.

For example, Japanese encephalitis is most likely to break out in Western Europe, while the West Nile Virus is a major threat in North America.

Information about thousands of bird and mammal species was involved in the study and researchers say it will help predict and track viruses around the world. 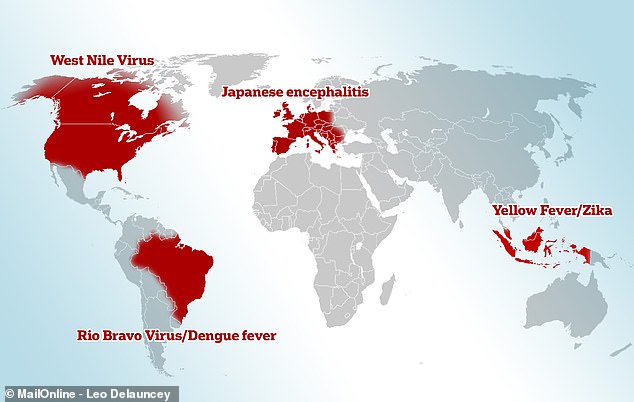 Scientists from the University of California, Davis, have examined animal and bird species data to figure out where they think the next virus outbreaks could happen – they decided West Nile Virus is most likely to affect North America, dengue South America, Japanese encephalitis Western Europe and yellow fever or Zika south-east Asia

Researchers from the University of California, Davis, have charted where they think future outbreaks of known viruses or similar strains will happen.

Viruses such as Zika, dengue and West Nile tend to be transmitted to people – at least in the first instance – from warm-blooded animals via mosquitoes.

Scientists have compared information about every known bird and mammal species on earth to work out which ones carry different types of viruses.

They found Zika and yellow fever are most likely to break out in south-east Asia, particularly Indonesia and Malaysia, with other hot-spots in Europe and Africa.

People are at highest risk of West Nile Virus in the US, Mexico and the south of Canada, with a lower but not absent risk across Europe and Russia.

The St Louis encephalitis and Usutu viruses are also likely to be found in the same areas, the study found.

Dengue, which is common and can cause fever, vomiting and rashes, is most likely to break out in South America in Brazil and surrounding countries. 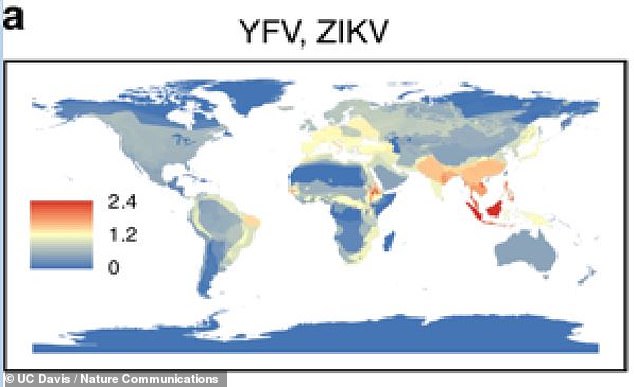 Yellow fever (YFV) and Zika (ZIKV) or similar viruses are most likely to break out in south-east Asia (red and orange), with some risk areas in Africa, Europe and South America (yellow) 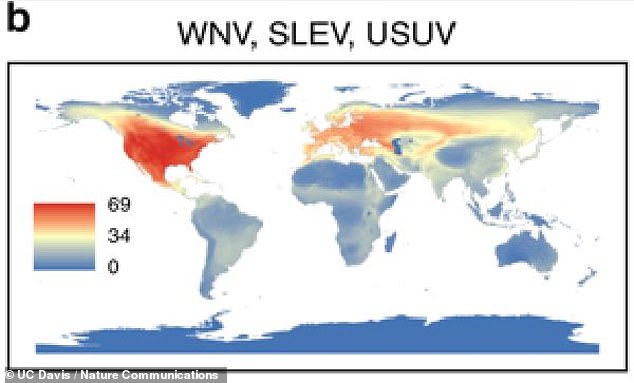 West Nile Virus (WNV), St Louis encephalitis (SLEV) and Usutu (USUV) are all most likely to affect North America, according to the study, with some risk in eastern Europe and Russia as well 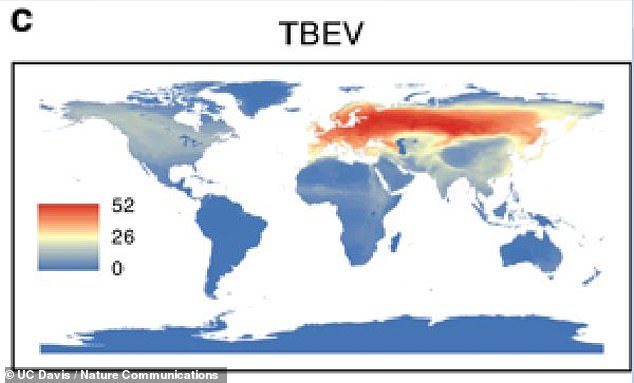 Tick-borne encephalitis (TBEV), an infection which can damage people’s brains, is most likely to surface in Russia and northern Europe, researchers showed

According to the research, Western Europe is most at risk of an outbreak of Japanese encephalitis, a brain infection found in pigs which can cause seizures, paralysis and even death in severe cases in humans.

Tick-borne encephalitis, another brain infection, is also most likely to break out in Europe, though further to the east and into Russia.

When flaviviruses infect people they often cause fevers, headaches, tiredness and rashes, muscle or joint pain and some cause nausea or vomiting.

Most people only suffer mild illness and recover quickly but complications can be life-threatening.

Less well-known viruses Rio Bravo, Entebbe bat and Dakar bat – the latter of which are both carried by bats – are also most likely to be found in South America.

‘If there’s an outbreak anywhere in the world tomorrow, we now know which wildlife species are most likely to be infected in addition to humans,’ said lead author Pranav Pandit. 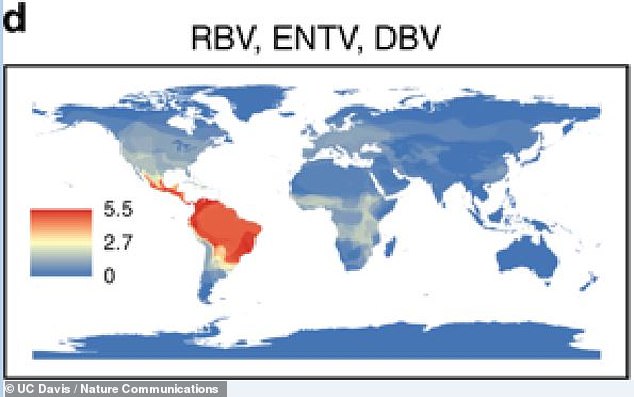 Rio Bravo virus (RBV), Entebbe bat virus (ENTV) and Dakar bat virus (DBV) are all most likely to be found in South America in Brazil and the surrounding countries, the study found 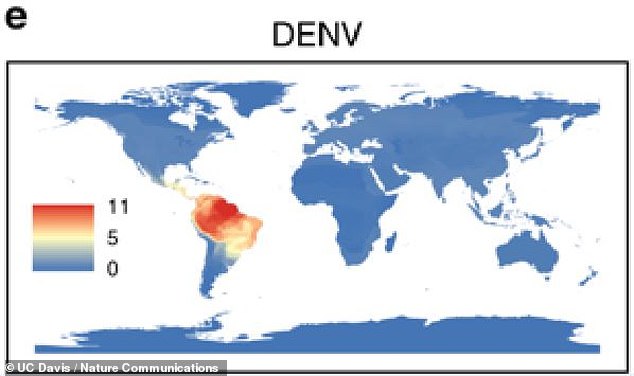 Dengue, an infection common in tropical countries, is also most likely to break out in South America, according to the study based on the types of animals living there 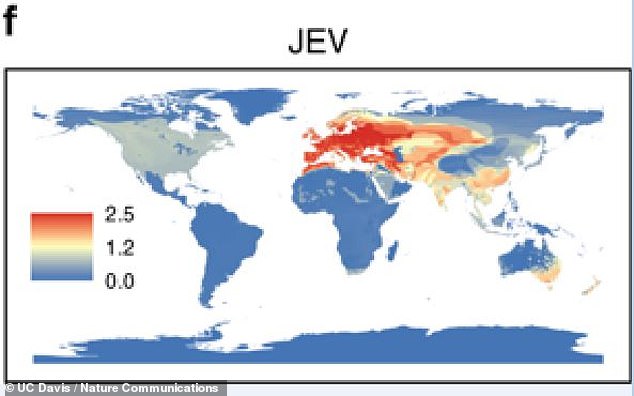 Japanese encephalitis (JEV) is most likely to spread among animals and birds in northern and western Europe, the University of California scientists said

WHAT IS MOST LIKELY TO CAUSE THE NEXT EPIDEMIC?

In February 2018, The World Health Organization released its annual list of lethal bugs that they warned there is an ‘urgent’ need to accelerate research into.

The ones that they prioritised were:

Around 10,400 bird species and 5,400 mammals were included in the study to work out which were most likely to host contagious diseases.

Some animals identified as potential carriers were associated with viruses for the first time.

For example, 139 new hosts for dengue were discovered among the 173 species the study predicted could carry the virus.

Researchers said the knowledge will be useful for tracking the spread of viruses among animals, because testing for flaviviruses can be difficult.

If they target the correct species they can now test for diseases using non-invasive methods like taking saliva samples from sticks chewed by primates, for example.

Co-author, Professor Christine Kreuder Johnson added: ‘We needed this modeling technique to help us understand the most likely hosts for these viruses in their natural habitat.

‘That’s important for both global health and wildlife conservation.’

The research was published in the journal Nature Communications.

WHAT IS THE ZIKA VIRUS?

The Zika virus is spread by mosquito bites, between people during unprotected sex, and from pregnant mothers to their children.

It cannot be cured or prevented with medicines. Although most adults do not become seriously ill from the infection, it can cause serious birth defects if pregnant women get it.

Foetuses’ brains can be affected by the virus when it is passed on from the mother and it can cause microcephaly.

Microcephaly is a condition in which babies’ heads are unusually small, which can lead to seizures, delayed development and other disabilities.

The virus can also increase the risk of unborn children developing Guillain-Barre syndrome – an uncommon illness in which the immune system attacks the nerves and can cause muscle weakness and paralysis.

Zika is a tropical disease and is most common in Central and South America, Africa and South East Asia.

There was an outbreak of the virus in Brazil’s capital, Rio de Janeiro, in 2016 and there were fears that year’s Olympic Games would have to be cancelled after more than 200 academics wrote to the World Health Organization warning about it.

The virus is not commonly found in developed countries like the UK, US and Australia. But it is present in the Pacific Islands such as Fiji and Tonga, where the pregnant Duchess of Sussex will visit on her royal tour this month.

Top ‘Normal’ Temperature May Be Lower Than Current Standard

How to respond, not react – and ditch the drama and regret as a result