Home » Health News » When Helen reads a sentence, the words each have their own colour

Helen Besgrove, 33, has always experienced words in colour. They have a distinct texture, too. To her, "Monday" is a really smooth, light pink, "Tuesday" is dark greeny-blue, while "Friday" is curly and green, reminding her of broccoli.

She also experiences sound, touch and smells the same way. In Helen's mind, the word "toast" is blue, but the concept of eating it is white. 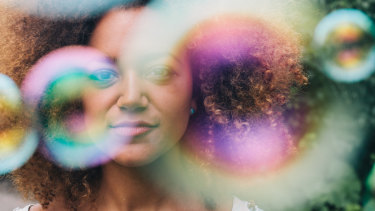 Synaesthetes often assume that everyone perceives the world the same way they do.Credit:Stocksy

Helen didn't realise until she was 20 that she experiences the world differently from others. She was at university studying radio when she learnt about a woman who experienced sound in colour and that this was known as synaesthesia.

Synaesthesia is described as a "crossing of the senses", where a person can translate one type of sensory experience as occurring in more than one sense. So they may be able to hear colours, or smell sounds.

Associate Professor Anina Rich, from the Synaesthesia Research Group at Macquarie University in Sydney, has been studying synaesthesia for almost two decades. She says the condition may occur in up to 4 per cent of the population and that while it can take many forms, the most common is grapheme colour, which is when letters, words or digits evoke colour, as they do for Helen.

Less common types include mirror touch, when a person watching someone being touched has feelings of being touched themselves, and lexical-gustatory, where people experience taste in response to words.

While there's no definitive answer as to why people have synaesthesia, says Rich, there are two main hypotheses. The "traditional view" is that synaesthetes (people with synaesthesia) have an additional connection between parts of their brain.

Rich's research is more consistent with the view that there is a continuum, with synaesthetes occupying the "pointy end" of the scale. According to this theory, synaesthetes have the same number of connections as the rest of us, but for some reason they're stronger, or less inhibited.

Having synaesthesia has advantages, says Helen. For instance, she finds learning languages easy because she has an extra sense to help her remember words and combinations of sounds.

Mind you, Helen says it can have its drawbacks, too. She experiences "left" and "right" as different variants of green, so can get confused when following directions. But for the majority of time, Helen doesn't think twice about the way she experiences the world because it's "just so innate".

It's that feeling of innateness that often accounts for why synaesthetes are unaware they have the condition. Instead, they assume that everyone perceives the world the same way they do. "If you think about it, we all make that assumption," says Rich.

She says their moment of discovery tends to follow one of two routes. "It's often, 'I had no idea that the rest of you didn't do this,' " which Rich says is quite common. "The other story is actually much sadder, which is that somebody might have said something early on and been ridiculed for it and so never mentioned it again."

Rich recalls talking to a woman in her 80s who confessed that, as a child, her mother had warned her not to tell anyone about her "colours" or she'd be locked up. "So she'd basically thought she had some sort of disorder her whole life."

Stories like these make Rich keen to debunk the myths surrounding synaesthesia. "The assumption is, 'It's different and therefore it must be a disorder,' which is not the case at all. If anything, it's an unusual gift."

This article appears in Sunday Life magazine within the Sun-Herald and the Sunday Age on sale February 3.

How COVID Has Changed Our Movement, as Revealed by Your Cellphone

The Fit List: Six products to make you perform your best