Home » Health News » What happens to your body when you stop being stressed out?

Peter Gutwein, the former premier of Tasmania, always felt capable of managing the stress of his role.

The 57-year-old got seven to eight hours sleep each night, started the day with a hundred push-ups, a couple of hundred sit-ups and a walk, he ate well, didn’t drink, and utilised positive self-talk. 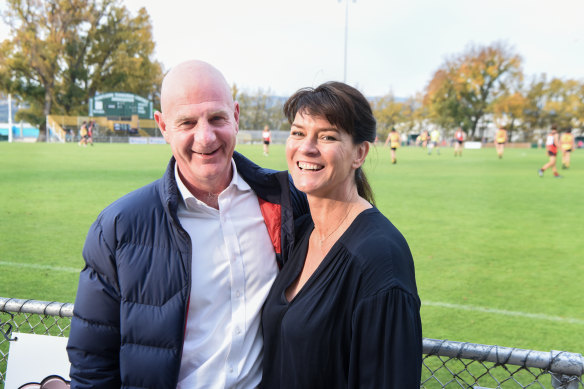 Still, his role had an impact on the rest of his life. The hours were brutal and, over the course of his 20-year parliamentary career as his responsibilities grew and then the chaos of COVID hit, he went from being away from his wife and two children four days a week to 6½ days a week.

The cost of that didn’t hit him until March this year when his daughter Millie, then 17, caught COVID and, as a close contact, he spent the week with his family isolating at home in Launceston.

On day five, his wife Amanda said they should celebrate. “I was bemused,” he recalls. “I had no idea what she was talking about, but she said, ‘five days in a row under this roof is the longest that you’ve spent with us as a family in two years’.”

It dawned on him that he’d been an absent parent for far too long and as much as he enjoyed his job and felt proud of the work he put in, it came at a “real detriment” to his family.

The year winding down is a common time for people to reflect on their lives and careers, and for those in high-stress jobs it can be a good point to take stock to consider what really matters in life.

How a high-pressure job or chronically stressful situation impacts us depends on a variety of factors, explains Paul Valent, a psychiatrist and co-founder of the Australasian Society for Traumatic Stress Studies.

But its effects are not just felt by the individual, as Gutwein realised.

Gutwein’s decision to quit was clarified just a week later when he found himself in the middle of a press conference in Hobart on a Sunday afternoon, away from his family again only days after his conversation with Amanda. “What am I doing here?” he thought. “This is not the way I want to live my life.”

Gutwein announced his decision to step down on Monday, April 4, and packed up his bags to head home for good that Friday.

It was strange not having to check his phone constantly and to discover a new rhythm to his days: he wrote himself an exercise program, got stuck into a lengthy to-do list around the house and promised not to make any big decisions about his next move for at least three months. He hasn’t looked back once, he says.

He has attended his 16-year-old son’s midweek football games; walked the dogs with his daughter; been there while she does her HSC; and enjoyed just sitting with his wife for a coffee and a chat.

“It’s just fantastic to spend time with my family and to design the type of life that I want, and they deserve,” says Gutwein, who has recently been appointed chair of Migrant Resources Tasmania.

So the stress is gone. But what happens to our body, and mind, when a chronic stress is removed, temporarily or permanently, hinges on our perception.

If someone feels relief about leaving a stressful job or situation because it creates time and energy for things they value, like family and other important relationships, involvement in the community, health or expansion of knowledge, the physical cascade effect will be very different to someone who feels stressed because they have lost financial security or feels they have lost their sense of identity, status or purpose.

“Each one of these [perceptions] has different biological, psychological, and social repercussions,” explains Valent.

When someone in a high-stress job quits or takes a break, it’s not uncommon for them to become ill. Simplistically, it can be the result of an overactive stress response – via our parasympathetic and sympathetic nervous systems – Valent says, that puts our bodies out of balance when we stop.

If time away from work stresses makes us wonder what we’re doing with our lives, this can also make us feel depressed, which in turn suppresses our immune system, Valent adds.

Any suppressed anger around the cause of our stress has knock-on effects, elevating blood pressure, cholesterol and fatty acids, which can predispose us to high blood pressure, strokes and heart attacks.

If, however, we feel relief about quitting or stopping, in time our blood pressure comes down, our immune system may function better, we are less likely to have digestive or urinary problems and need uppers and downers to act in place of a well-functioning nervous system.

When we are stressed, cortisol and other hormones influence how our bodies read our genes, explains associate professor Divya Mehta, the team leader of the Stress Genomics Group at the Queensland University of Technology. “Changes in the activity of the gene is what epigenetics is about,” she explains.

Although some people have genes that predispose them to stress, environmental factors affect whether those genes are activated and to what extent. In a study published earlier this year, Mehta and her team took DNA samples from a group of paramedical students before and after they had been out on assignment in an ambulance, witnessing traumatic events for the first time.

The stress influenced how their bodies interpreted their genes, leading to increased rates of distress, anxiety and depressive symptoms. However, the symptoms among participants who had strong social support and who felt a sense of belonging (in any kind of group) were markedly reduced.

Separate research Mehta has done looking at veterans with PTSD has found exercise can have a similar mediating effect on the impacts of stress. “Food can also change our hormones and metabolism and impact epigenetics,” she adds.

All of this is to say that we can’t always remove stress, and in more traumatic instances even when the stress is removed the body keeps firing cortisol, but we can buffer ourselves and create an environment that helps us to come back into balance on the other side of it.

Chronic stress is the perception that our coping resources are outweighed by what is happening in our environment or what is expected of us, explains Dr Vivienne Lewis, a clinical psychologist and academic at the University of Canberra.

“It is often an ongoing feeling of anxiety, trouble sleeping and eating, mood changes such as being easily agitated or just feeling unmotivated to do anything and feeling overwhelmed,” says Lewis, whose focus is bullying and harassment-induced stress. “It often makes people withdraw from others and engage less in pleasurable activities. Chronic stress also affects the immune system, making a person more susceptible to illness and disease.”

When a stress is removed, or we remove ourselves from the source of stress, we typically feel relieved and calmer, but the body can remain in a heightened state for some time.

“It’s important for a person to actively participate in relaxing activities to help their body and brain recover from a period of stress,” she says. These activities can include meditation or mindfulness, journaling, breathing exercises, physical activity, being in nature, connecting with loved ones or getting creative.

Self-awareness, and the ability to see when our stress levels are rising, when we need to take a break or stop something altogether, is important here, says Valent: “The more you can read your body and your emotions and your mind, the better you can put them into context, understand, and help yourself.”

If the stress doesn’t resolve, people may need support from a clinical psychologist to learn new ways to manage.

And while the amount of time it takes to wind down will vary, research shows that, for stress management, short and regular breaks are better than a long holiday once a year, Lewis says: “A good break over Christmas, which might be two weeks, is enough to recharge as long as you are doing things that actually recharge you and not just adding stress in a different form.”

Make the most of your health, relationships, fitness and nutrition with our Live Well newsletter. Get it in your inbox every Monday.

Most Viewed in Lifestyle