Home » Health News » Washington DC starts to reopen, but not everyone is ready 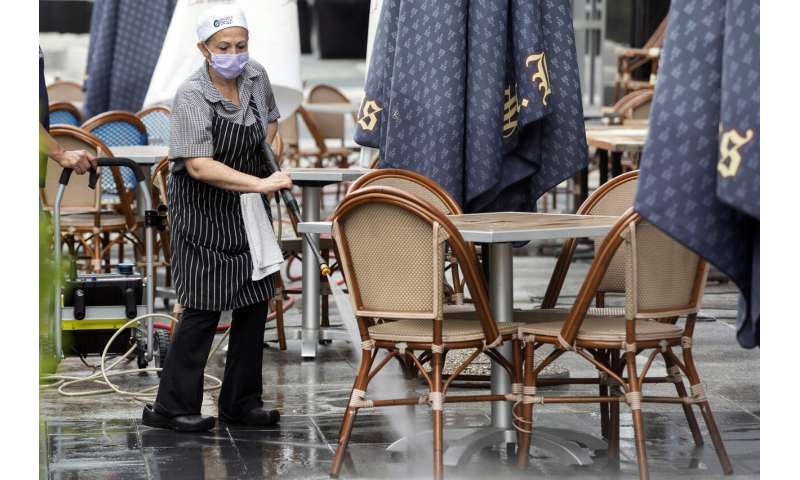 The nation’s capital began its phased-in reopening Friday in fits and starts, with not everyone ready for even a limited return to pre-pandemic normality after a three-month-old stay-at-home order was lifted.

Barbers and hair salons now can welcome back clients grown haggard from months of self-maintenance. Nonessential businesses, shuttered since late March, can start offering curbside pickup. And restaurants that have been operating solely on takeout began limited outdoor seating.

It’s a major turning point in the District of Columbia’s road to recovery after officials imposed three solid months of economic and social lockdown in response to the coronavirus. All across the capital—and the four neighboring Virginia counties that are reopening on the same schedule—business owners and their customers are still considering their next steps.

Only one of the dozen outdoor tables at the Busboys and Poets branch in Washington’s Brookland neighborhood was occupied in late morning, while eight different groups waited for their takeout.

Andy Shallal, who owns seven branches of the restaurant chain, has been ready to reopen for weeks. He predicted Thursday that the patios would be packed if the weather is good.

But some other business owners were more cautious. 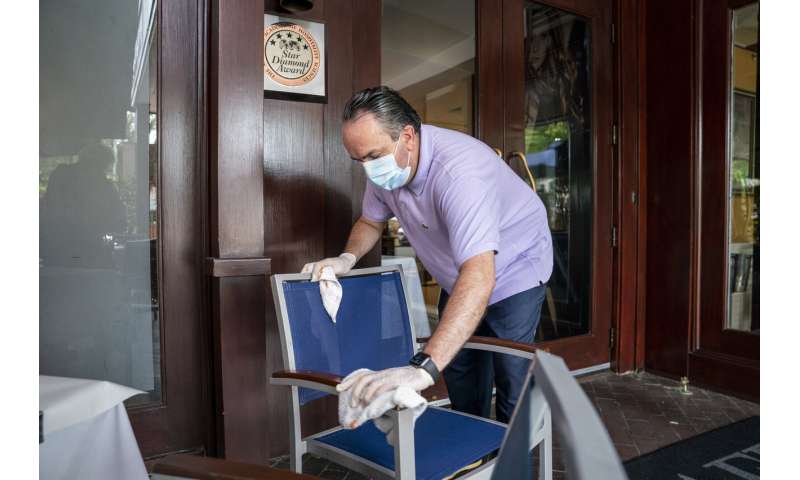 “I’ll be honest. I don’t know why (barbers) are in phase one,” said Ryan Mitchell, part owner of the St. Martin’s hair salon in Washington’s Mount Pleasant neighborhood. “Everyone wants to think this is over. I don’t see any reason to think that.”

In Northern Virginia, meanwhile, restaurants are busy setting up tents in parking lots and considering other options, like converting parking lanes to sidewalks and sidewalks to outdoor seating.

“It really will be a block by block decision,” said Mary-Claire Burick, president of the Rosslyn Business Improvement District.

She said there’s a mix of excitement and trepidation as the area reopens.

“This is new for everyone,” Burick said.

Other restaurants are in absolutely no hurry to rush back into an uncertain landscape.

James Waterhouse runs Garden District, an outdoor beer garden in the heart of a lively stretch of bars and clubs. Theoretically, he’s perfectly positioned to thrive in this outdoor phase. But he won’t open Friday and won’t predict when he’ll be ready. 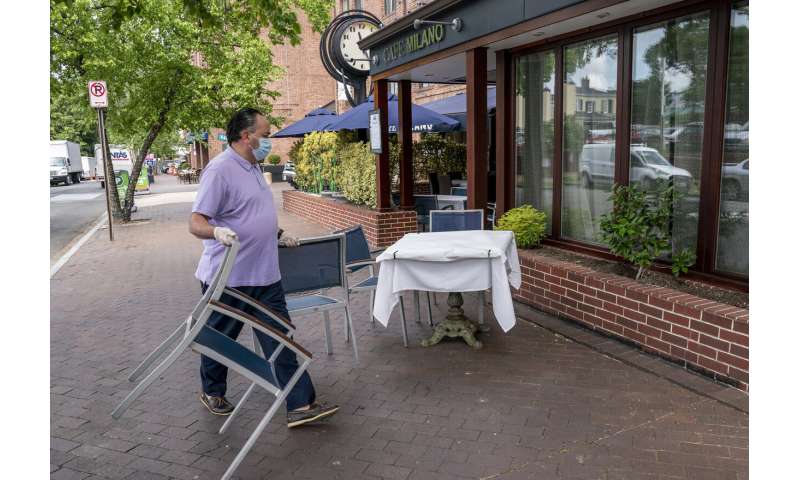 “I’m not comfortable with all the logistics of how it’s going to work,” he said. “I’m going to be asking a lot of my staff and I need to know I can protect them.”

Washington remains an area of concern in the pandemic. There were 263.2 new cases per 100,000 people in the District of Columbia over the past two weeks, which ranks first in the country for new cases per capita.

All told, nearly 8.500 people in the District have tested positive for the coronavirus, and 453 people have died.

Still, Waterhouse knows most of his regular clientele is eager to return, but some staff members have talked about staying away over safety concerns. He also seems genuinely bummed out about how the necessary safety modifications will change the overall vibe of his place.

“You won’t be able to just sit at a picnic table with a group of strangers,” he said. “We’ll have to serve beer in plastic cups. It’s going to be an environmental disaster.” 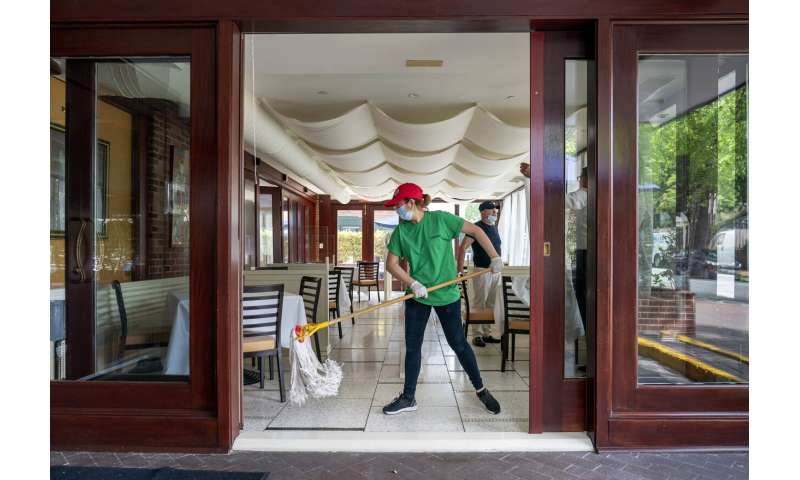 Customers are going to have to make their own set of decisions about their comfort level. In the Chevy Chase section of Washington, Liz Chambers and Michele High chatted on the otherwise empty patio of the Bread & Chocolate restaurant Thursday, hours before the official start of phase one. The restaurant was offering takeout service but also had set up tables and chairs on the patio.

High, a Washington resident, and Chambers, from Centreville, Virginia, said they probably wouldn’t meet there if a lot of other people were around, even if they were six feet away. Asked if she thought the city was moving too quickly toward ending the shutdown, High said, “I can’t imagine the pressures that are on the mayor to reopen.”

On 14th Street downtown on Thursday, Gretchen Moyer, a patent lawyer, wondered how nervous the mood would be as people emerge back into public.

At St. Martin’s hair salon, Mitchell said he’s targeting a June 15 reopening date. His lingering safety concerns are balanced by an endearing loyalty from clients desperate for an appointment. 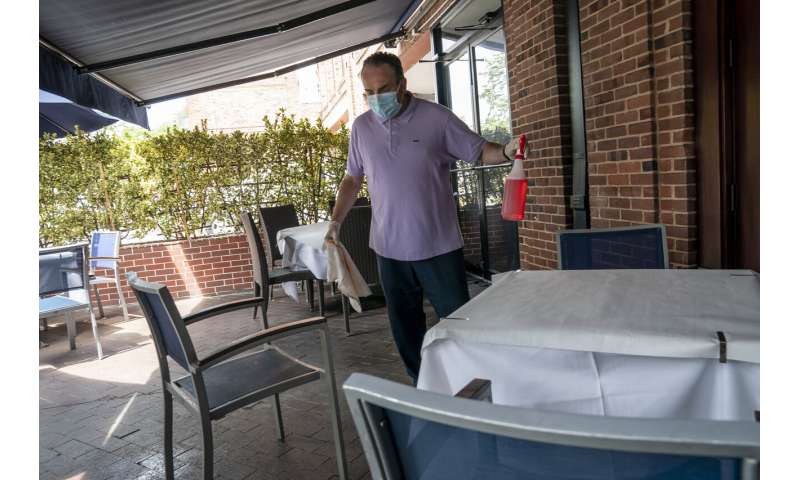 “There’s something about the psychology of haircuts. People view it as a big part of a return to normality,” he said.

But first there are internal safety modifications to deal with, amid obstacles that include unexpected shortages of suddenly precious resources.

This couple broke up in the middle of a joint work project. Here’s how they finished the job harmoniously.