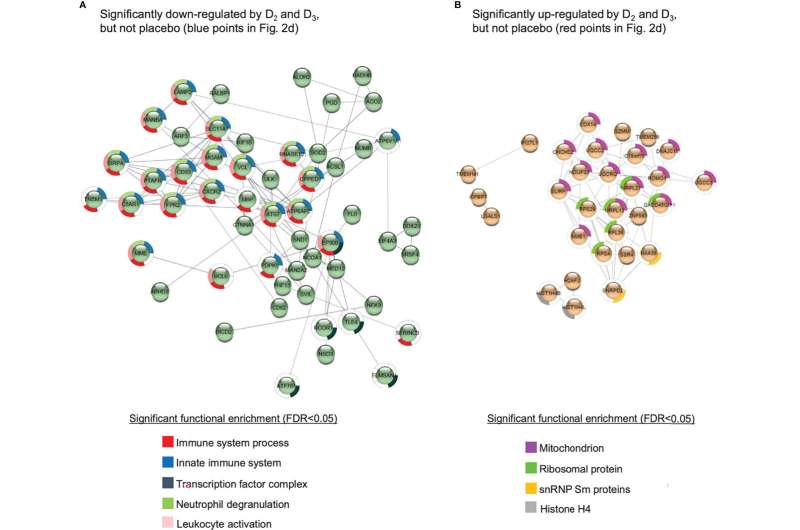 New research has found significant differences between the two types of vitamin D, with vitamin D2 having a questionable impact on human health. However, the study found that vitamin D3 could balance people’s immune systems and help strengthen defenses against viral infections such as COVID-19.

In a collaborative study by the Universities of Surrey and Brighton, researchers investigated the impact of vitamin D supplements—D2 and D3—taken daily over a 12-week period on the activity of genesin people’s blood.

Contrary to widely held views, the research team discovered that both types of vitamin D did not have the same effect. They found evidence that vitamin D3 had a modifying effect on the immune system that could fortify the body against viral and bacterial diseases.

“We have shown that vitamin D3 appears to stimulate the type I interferon signaling system in the body—a key part of the immune system that provides a first line of defense against bacteria and viruses. Thus, a healthy vitamin D3 status may help prevent viruses and bacteria from gaining a foothold in the body.

“Our study suggests that it is important that people take a vitamin D3 supplement, or suitably fortified foods, especially in the winter months.”

Although some foods are fortified with vitamin D, like some breakfast cereals, yogurts, and bread,fewnaturally contain the vitamin. Vitamin D3 is produced naturally in the skin from exposure to sunlight or artificial ultraviolet UVB light, while some plants and fungi produce vitamin D2.

Many people have insufficient levels of vitamin D3 because they live in locations where sunlight is limited in the winter, like the UK. The COVID-19 pandemic has also limited people’s natural exposure to the sun due to people spendingmore time in their homes.

Professor Susan Lanham-New, co-author of the study and Head of the Department of Nutritional Sciences at the University of Surrey, said:

“While we found that vitamin D2 and vitamin D3 do not have the same effect on gene activity within humans, the lack of impact we found when looking at vitamin D2 means that a larger study is urgently required to clarify the differences in the effects. However, these results show that vitamin D3 should be the favored form for fortified foods and supplements.”

High cholesterol: The four natural ways you can lower your levels

How to live longer: Scientist shares seven habits you need to have to boost longevity

Watching out for animal flu viruses that could trigger human pandemics