A team from the University of Bath has pioneered the first fully combined framework for imaging both matrix viscosity and membrane fluidity using fluorescent molecular rotors (FMR) combined with fluorescence lifetime imaging (TFR-FLIM). 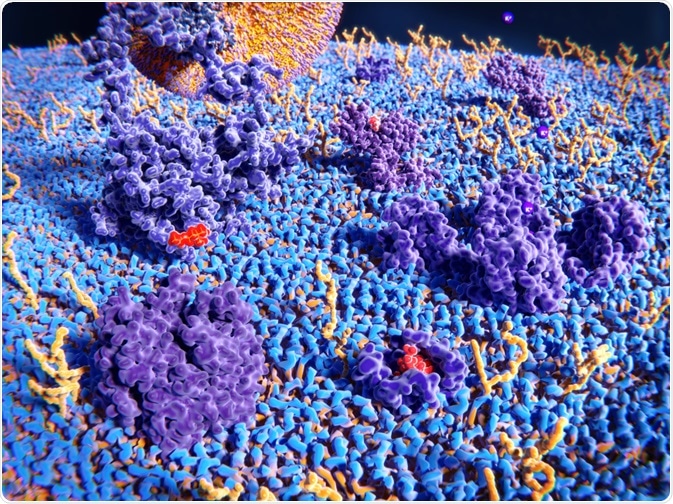 By combining both chemical targeting and organelle extraction, the team investigated the matrix viscosity and membrane fluidity of mitochondria for proof-of-concept. They discovered that the mitochondria were both highly dynamic and responsive to perturbations – both physiological and physical, which revealed that viscosity and fluidity are not set.

This underpins the need for not only single-cell but single-organelle imaging, particularly because microenvironments are good indicators of disease onset and progression.

Viscosity in microenvironments is defined as the total volume between the solvent molecule and a probe. This parameter has several implications in the cellular context. It affects diffusion, which impacts reaction rates, so much so that high viscosity combined with lowered diffusion may prevent or curtail some reactions.

Consequences of this effect could be cell- or organism-wide, and therefore the need to visually track membrane fluidity and cell viscosity reveals much about the kinetics and outcomes of reactions in cells and organelles. Further still, drug delivery systems inherently rely on diffusion, therefore quantifying membrane viscosity is therapeutically relevant.

Due to the knowledge demand required for the implementation of this technique as well as a lack of analysis software at a commercially available scale, other alternatives are concentrated on FMR’s and fluorescence lifetime imaging (FLIM).

These fluorescence lifetime techniques offer the advantage of being independent of concentration, something which intensity-based techniques, such as anisotropy, are not. FMRs are short-lifetime dyes that fluoresce weakly when excited in environments with reduced viscosity. In higher viscosity environments, both the lifetime of the probe and intensity of fluorescence are intensified.

Since organelles often determine disease onset and progression, monitoring their characteristics is desirable. Steinmark and colleagues elected to focus on mitochondria as they are the subject of great attention in clinical research, particularly as they are highly relevant in Complex I deficiency, Alzheimer’s, Huntington’s, and Amyotrophic lateral sclerosis.

Previous approaches have used FMRs conjugated to proteins, but as these probes are relatively large, the sensitivity of viscosity measurements is lowered. In order to circumvent the issue, an alternative FMR framework was proposed by Steinmark et al. This included a combination of organelle extraction and chemical targeting.

The team instead used a small chemical motif to investigate viscosity in mitochondria; this did not compromise the limit of sensitivity. While matrix viscosity has been determined by fluorescence correlation spectroscopy (FCS) and fluorescence recovery after photobleaching (FRAP), the membrane fluidity is still yet to be interrogated at the single-cell level.

Membrane fluidity has been implicated in neurodegenerative diseases, and so, a popular area of research includes the determination of fluidity and viscosity in non-diseased organelles.

To do so, a new, chemically targeted FMR, FMR-1, was used by the team to test how the matrix viscosity responded to non-disease-causing concentrations of Ca2+. To investigate how nutrient conditions during cell growth influenced membrane fluidity, the team took mitochondria from HeLa cells and imaged the fluidity of their membranes using a second chemically targeted FMR, FMR-2. FLIM was performed to image both position and timing information to be obtained.

Steinmark et al. found that both increased Ca2+ exposure and small deprivation of nutrients caused the matrix viscosity and membrane fluidity to vary. This illustrates that these parameters are not strictly restrained in the healthy state – demonstrating their ability to respond dynamically to both environmental and physiological changes. Steinmark and his team carried out control experiments to ensure viscosity was only affected by the addition of FMR-1.

To do so, they tested the effects of temperature, polarity, and ionic strength. These variables can affect viscosity, but in the experimental context, they were unrelated to FMR reporting. To determine whether FMR-2 could bias results seen in the membrane tested, the team carried out molecular dynamics (MD) simulations in a model lipid bilayer with and without FMR-2. Results showed that diffusion of membrane lipids was not affected by the dye, validating FMR-2 as a probe for the study of membrane fluidity.

The team notes that the current limitation of the use of FCS and FRAP is in the study of membrane fluidity. FCS, which measures how the concentration of a dye fluctuates, requires a background understanding of the system and low dye concentration. GRAP, which measures the repopulation time of a fluorescence-bleached area, is limited by organelle shape.

In comparison to TR-FAIM, FMR-FILM offers a greater potential for obtaining fluorescence movies. Compared to the high photon counts required for TR-FAIM, lower counts, as seen for FMR-FILM, allow for lowered times for acquisition – allowing filming of the membrane over longer time periods. The edge that FMR-FILM offers over its only viable alternative TR-FAIM are ease, speed, and accessibility—particularly as manual analysis in TR-FAIM is complex.

Owing to the suitability of the teams FMR-FLIM methodology for use across membranes, the hope is its implementation in biophysical, clinical, and drug delivery studies. The potential applications of this technique are widespread, from disease studies to drug delivery.

This research was funded by the King’s College London through a LIDo Ph.D. studentship for author IES, and by EPSRC (EP/L000202 and EP/P020194/1) to author CDL. The funders had no role in study design, data collection, and analysis, decision to publish, or preparation of the manuscript. The authors have declared that no competing interests exist.

Hidaya is a science communications enthusiast who has recently graduated and is embarking on a career in the science and medical copywriting. She has a B.Sc. in Biochemistry from The University of Manchester. She is passionate about writing and is particularly interested in microbiology, immunology, and biochemistry.

Study: plants protect us against the common cold and flu