Catholics have been told to keep their hands to themselves during Mass to stop the rampant spread of flu that has struck seven million Americans already this winter.

Parishioners in New Mexico were told to avoid shaking hands, hugging or holding hands during the sign of peace – and nod at each other instead.

The Archdiocese of Santa Fe has advised Catholics displaying symptoms of the flu to watch Sunday Mass on their TV.

Only the consecrated bread will be given during the Holy Communion – without the chalice of wine that is shared among churchgoers. 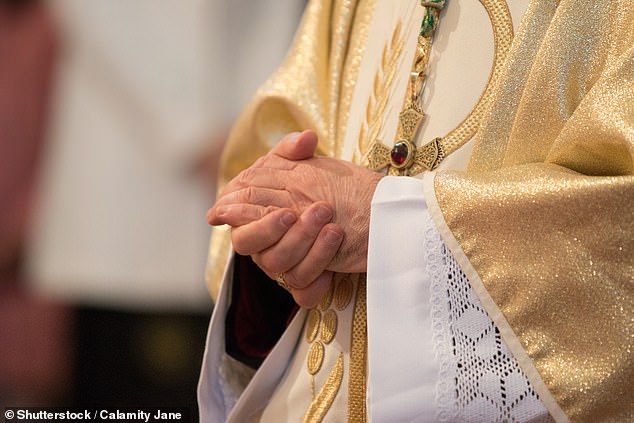 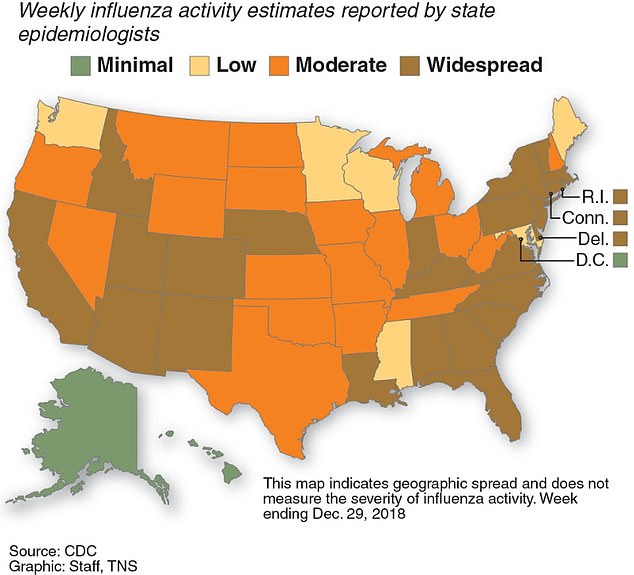 This year, 90 percent of flu cases tested by the CDC are H1N1, the same strain that caused the swine flu epidemic in 2009. Rates are high in 19 states and New York City

‘It is not a sin to miss Mass on Sundays if you are ill,’ the archdiocese said in a statement.

They also said that during the Sign of Peace, instead of shaking hands or hugging, as is practiced in some parishes, it would be best to simply nod your head and avoid bodily contact.

Soap or anti-bacterial gel should be used before and after administering Holy Communion.

‘When praying the Our Father, please do not hold hands,’ it said. ‘Simply extend your hands toward Heaven or fold your hands.

‘Please note the reason for these directives is to limit the spread of influenza and to save lives.

‘These directives will be revoked when the situation improves.’

HOW CAN YOU PREVENT FLU?

The Centre for Disease Control and Prevention recommends a yearly flu vaccine.

While there are many different flu viruses, flu vaccines protect against the three or four viruses that research suggests will be most common.

Flu vaccination can reduce flu illnesses, doctors’ visits, and missed work and school due to flu, as well as prevent flu-related hospitalisations – around 70,000-80,000 have been hospitalised so far.

Flu vaccination also has been shown to significantly reduce a child’s risk of dying from influenza.

But it is recommended anyone over the age of six months old should be vaccinated.

If you are sick with flu-like illness, CDC recommends that you stay home for at least 24 hours after your fever is gone except to get medical care or for other necessities.

If you get sick with flu, antiviral drugs can be used to treat your illness.

The statement comes just a few days after The New Mexico Department of Health (NMDOH) warned that flu activity had ‘sharply increased’ and is now widespread in New Mexico.

The flu has already taken the lives of four over 50s as of December. During last year’s flu season, New Mexico had more than 280 influenza and pneumonia-related deaths.

Diocese of Allentown in Pennsylvania also advised similar measures, in light of being listed as a state with widespread flu activity by the CDC.

Exchange of the sign of peace and the drinking wine from the chalice during Holy Communion would be stopped in its 84 parishes.

‘This suspension will begin with the Vigil and Sunday Masses the weekend of January 12-13, and will be in effect until the incidence of influenza subsides in our region,’ that statement said.

Up to 7.3million Americans have been sickened with the flu so far this season, according to the latest CDC estimates.

‘As flu infections increase across the state, it is important to get vaccinated if you haven’t already received the flu vaccine this season’, said the NMDOH Secretary Lynn Gallagher.

‘The flu vaccine is the best way for you to protect yourself and your families, especially young children and elderly family members.’

The NMDOH and the Centers for Disease Control and Prevention (CDC) recommend that everyone six months of age and older should get a flu vaccine.

The measures to avoid touching were also forced upon Catholics last year in Maine during the killer flu outbreak.

The Roman Catholic Diocese of Portland, which covers the entire state of Maine, warned priests to be ‘cautious not to touch the tongue or the hand of the communicant’.

Figures confirm the strain circulating widely this year (H1N1), while serious, is nowhere near as threatening as H3N2 last year.

The number of states reporting widespread activity increased to 30 from 24 states, the CDC said on January 11, with 15 states and New York City continue to experience ‘high flu activity’.

The latest estimates show at least 13 children have died. The CDC does not update data on adult deaths.

Why are my legs aching? The key warning signs of 4 types of blood clots