Miracle twin girls defied five per cent survival odds when doctors performed life-saving surgery while they were in the womb.

Matilda and Felicity Harvey had twin-to-twin transfusion syndrome, where one twin receives more blood supply than the other.

Keziah Harvey, 30, and her husband Jordan, 33, were told at 16 weeks pregnant that it was unlikely their girls would survive – with or without surgery.

One of the girls suffered a stroke, a complication of the syndrome that can happen when a baby’s blood pressure drops.

But the parents went ahead with the risky operation, and were over the moon when their ‘miracle’ girls were born – albeit five weeks premature – in July 2018.

The girls are now healthy eight-month-old babies, and doctors are happy with their development despite fears there would be severe brain damage. 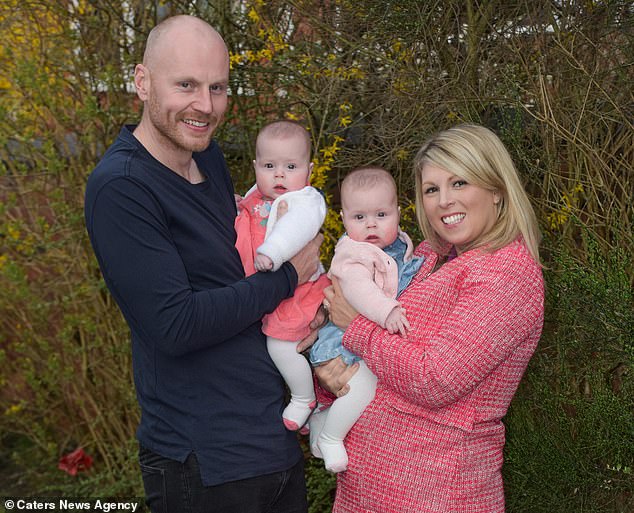 Keziah Harvey, 30, and her husband Jordan, 33, were told it was unlikely their girls would survive twin-to-twin transfusion syndrome with or without surgery 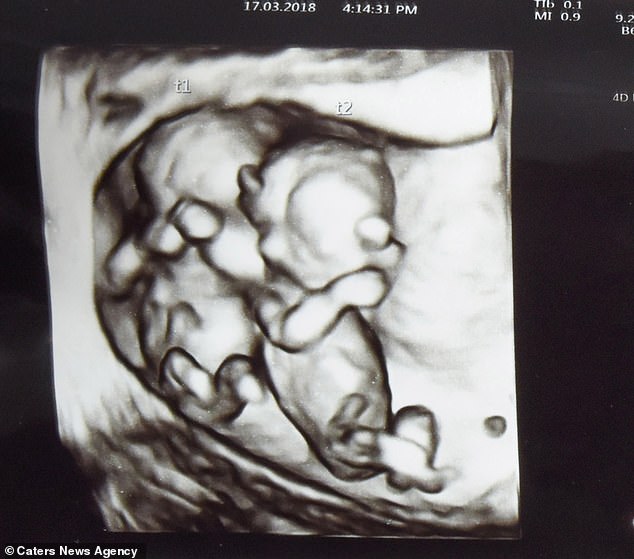 There was a 17 per cent difference in size between Matilda and Felicity Harvey and one of them suffered a stroke due to a drop in blood pressure. Pictured, a scan of the twins 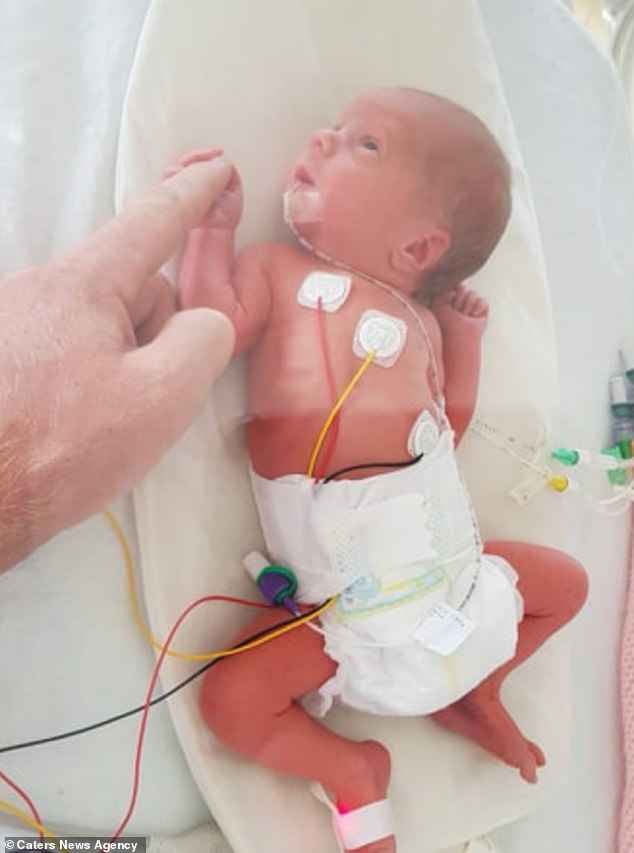 The twins were born five weeks premature in July 2018 but had to spend four weeks in the neonatal intensive care unit of Newcross Hospital in Wolverhampton. Pictured, Felicity in ICU 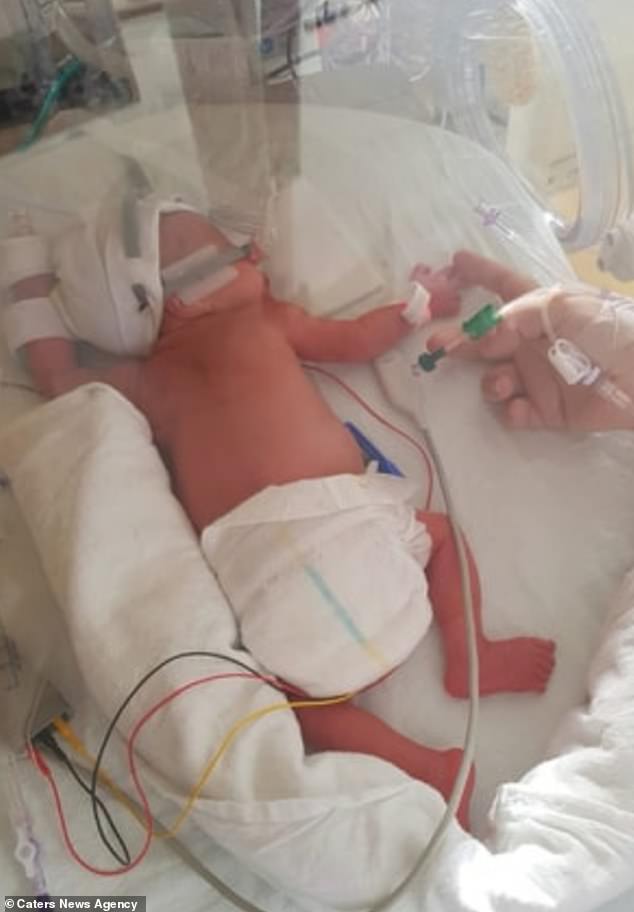 Mrs Harvey had the twins after 10 hours in labour and an emergency Caesarean section. Pictured, Matilda in neonatal ICU. Mrs Harvey said: It was lonely sitting next to their incubators all day not being able to help them’

Mrs Harvey, from Cannock, Staffordshire, suffered a miscarriage before the twins were conceived naturally.

She said: ‘Without the surgery my odds were around 95 per cent that I would have lost them and then with the surgery it was about 30 per cent they would both survive.

‘It was such a shock – I had only just found out I was having twins and then I might have lost them.’

The babies were diagnosed with TTTS at a 16 week scan, a condition occurring in around 15 per cent of monochorionic diamniotic (MCDA) twins – identical twins that share the placenta which account for around two thirds of identical twins, according to the NHS.

It causes abnormal blood vessel connections to form in the placenta and prevent blood from flowing evenly between the babies.

In most cases, one twin becomes dehydrated, which affects its growth, and the other develops high blood pressure which can lead to heart failure.

The surgery, routine for TTTS babies on the NHS, involves finding the blood vessels connecting the twins and closing them off to help the blood flow evenly. 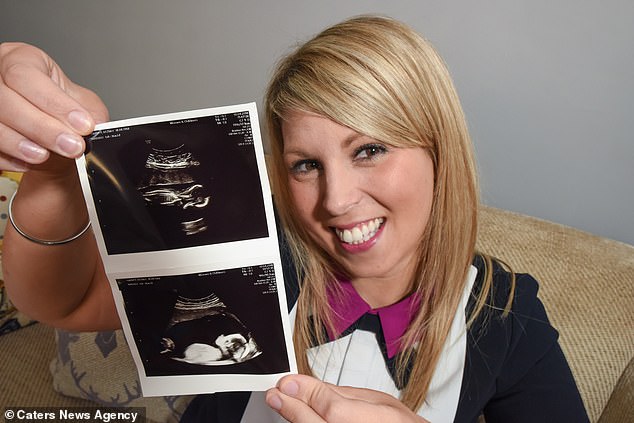 The babies were diagnosed with TTTS at a 16 week scan. Pictured, Mrs Harvey, who is formal dental practice manager, with scans from after the diagnosis 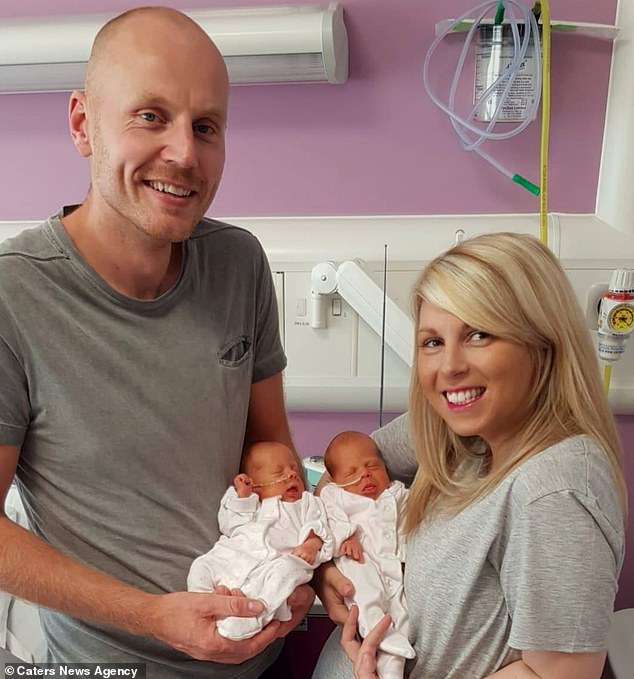 Mrs Harvey, who suffered a miscarriage before the twins were conceived naturally, had laser ablation surgery. The surgery involves finding the blood vessels connecting the twins and closing them off to help the blood flow evenly. Pictured, with their newborn babies

Mrs Harvey said: ‘I had the laser ablation and sedation while Jordan was able to hold my hand and got to watch it on the screen the whole time.

‘It was amazing he could watch them on a camera from inside my tummy and see all their teeny tiny features and little faces.

‘I came around knowing we were having two little girls. I also had 2.5 litres of excess amniotic fluid removed from around the bigger baby.’

After Mrs Harvey woke up from the surgery, Mr Harvey, a window fitter, told her they were having girls after watching the op on an ultrasound screen.

The next few weeks were full of apprehension as Mrs Harvey had scans every few days to check the babies were doing well.

She said: ‘Making it a day at a time and scan by scan was all that kept me going. I just lived for my next scan waiting to know if my babies were okay.’

At 24 weeks into her pregnancy, Mr and Mrs Harvey waited to find out if the laser ablation surgery had caused any brain damage to the babies through an MRI scan.

They discovered one of the girls had suffered a stroke prior to the operation taking place. 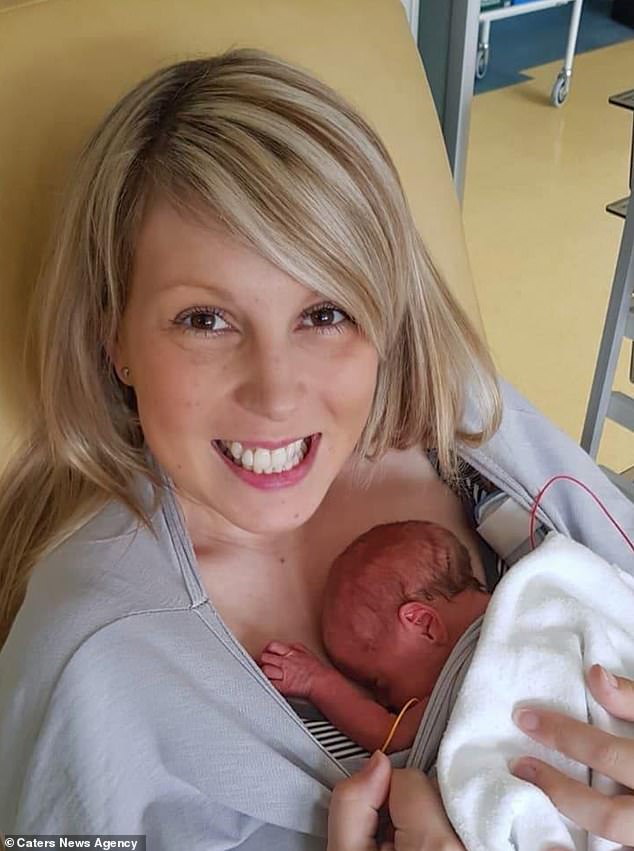 Mrs Harvey was told she was having girls after Mr Harvey watched the surgery on a screen. Pictured holding Felicity in hospital 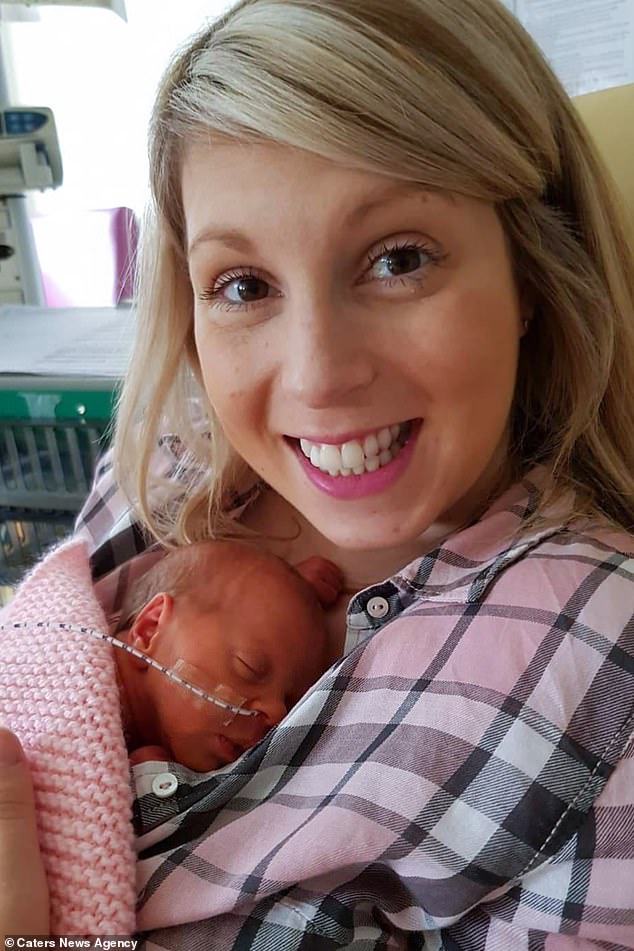 Mrs Harvey was scanned every few days after the surgery to check that her babies were okay. Pictured, holding Felicity in hospital

Following doctors’ concerns, they were asked if they wished to terminate the pregnancy – which they didn’t think twice about saying no to.

Mrs Harvey said: ‘It was so nerve-wracking waiting to find out and we were concerned when we were told one of the girls has a stroke prior to the surgery taking place.

‘The doctor was able to discuss the parts of the brain that may have been damaged; but as a baby’s brain is still growing, a stroke isn’t as final for babies as adults and their brains learn to grow new pathways to replace some of the parts damaged.

‘When we were offered a termination, the answer was always no, no matter the severity or the circumstances we would be faced with.

‘We wouldn’t really know the long term effects of the stroke until the baby grew and perhaps struggled with certain milestones.’

At 32 weeks pregnant, Mrs Harvey gave birth to the twins on 29 July, 2018, after 10 hours in labour and an emergency Caesarean section. 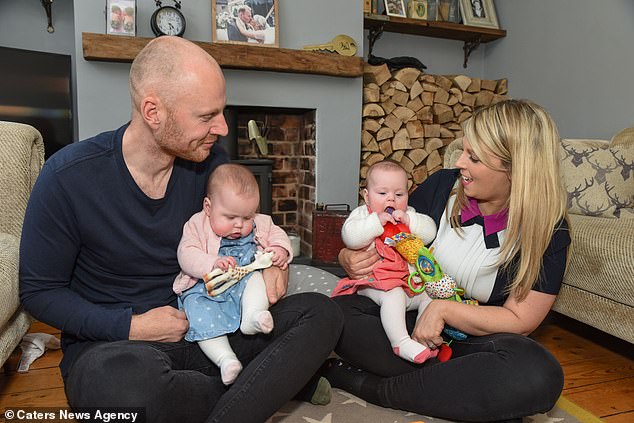 Following doctors’ concerns, the couple were asked if they wished to terminate the pregnancy – which they didn’t think twice about saying no to 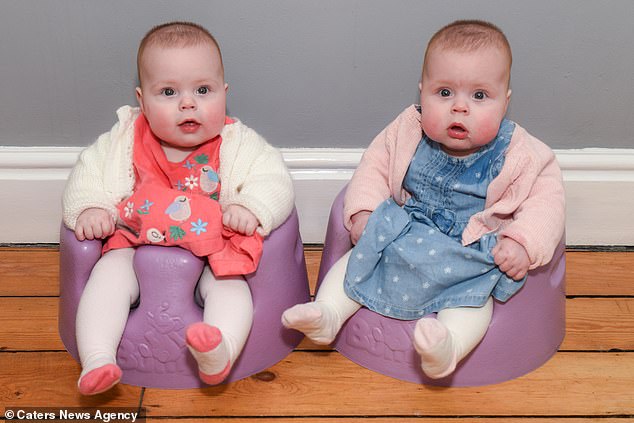 Ms Harvey said: ‘We wouldn’t really know the long term effects of the stroke until the baby grew and perhaps struggled with certain milestones’ 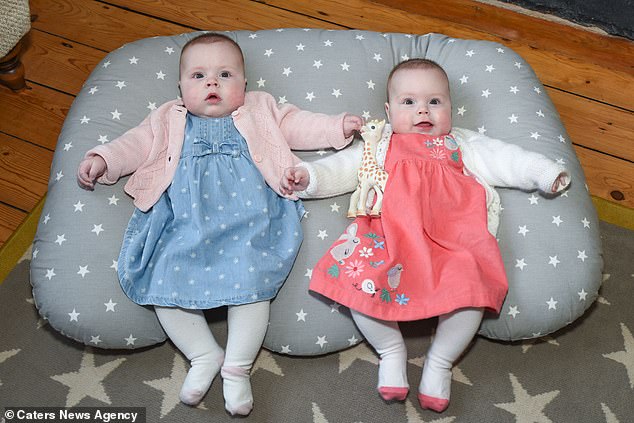 The girls are now healthy eight-month-old babies, despite doctor’s fears they could be brain damaged, but do need physiotherapy

Matilda and Felicity then spent four weeks in the neonatal intensive care unit of Newcross Hospital in Wolverhampton.

Mrs Harvey said: ‘It was lonely sitting next to their incubators all day not being able to help them – it is never how you imagined those first precious moments as a mummy.

‘We could only put our hands in the incubators to hold the girls hand for a very short time and we had to wait for their temperatures to stabilise before we could hold them.

‘Seeing them so tiny covered in wires and tubes, monitors and cannulas was hard to see.’

But eight months on, the girls are healthy and are developing well and don’t appear to have been left with any long term effects.

Mrs Harvey said: ‘They are making great progress and the consultant is happy with their development so far; they’re having regular physio but so far all on track.

‘I’m so thankful to Professor Kilby and the amazing teams at Newcross and Birmingham Women’s Hospital.’

Mr Harvey added: ‘We felt so helpless throughout everything.

‘Being a family is the best thing in the world. I’m so grateful to the amazing team at New Cross and Birmingham Women’s Hospital.’

You can read more about the Harvey family’s story on Mrs Harvey’s blog.

WHAT IS TWIN-TWIN TRANSFUSION SYNDROME?

Twin-twin transfusion syndrome is a rare but serious condition that can occur in identical pregnancies when twins share a placenta.

Abnormal blood vessel connections form in the placenta and prevent blood from flowing evenly between the babies.

One twin then becomes dehydrated, which affects its growth.

The other develops high blood pressure and produces too much urine.

This leads to an enlarged bladder and excessive amounts of amniotic fluid, which can put a strain on the twin’s heart, leading to heart failure.

Without treatment, TTTS can be fatal for both twins.

The condition occurs in about around 15 per cent of identical twins who share a placenta, according to the charity Tamba.

Around 300 twins die from the condition every year in the UK, while 6,000 babies are affected annually in the US.

If this is not enough, laser surgery is used to seal shut abnormal blood vessels and permanently disconnect them.

The surgeon then drains excess fluid.

Even when treated successfully, most TTTS babies are born premature.

However, the majority go on to have long, healthy lives.

Cancer: Condition putting you at a higher risk – toilet signs