Home » Health News » Trump falsely used the term 'Chinese virus' again. This is not the first time a pandemic has fueled xenophobia.

In the early days of the novel coronavirus, the virus that has caused a global pandemic, it was widely referred to as the Wuhan coronavirus, because the initial outbreak began in Wuhan, China.

As misinformation spread around the virus, people boycotted Chinese restaurants, and there was an increase in xenophobic incidents targeting anyone of Asian descent. Asian-Americans have reported being treated with suspicion at work, university campuses, and in retail stores like Costco, where an eight-year-old was told by a Costco employee giving out samples to "get away because he may be 'from China.'"

The World Health Organization clarified that the coronavirus is called SARS-CoV-2 (though many are simply saying "the coronavirus") and the disease it causes is called COVID-19. However, one report showed that, even after that, there was a noticeable uptick in Republican lawmakers continuing to use the term "Wuhan virus."

On March 18, Donald Trump was asked if he thought calling the outbreak the "Chinese Virus" or the "Kung Flu" could result in attacks and Asian Americans.

He had, a photo showed, crossed out "corona virus" on his notes and wrote in Sharpie "Chinese Virus." At most every press conference last week, Trump used the term "Chinese Virus." Today, the president came under fire for a tweet describing Asian Americans as separate from Americans: "They are working closely with us to get rid of it."

Trump responded: "Not at all. I think they probably would agree with it 100%. It comes from China."

Experts in human rights and public health — including in the Trump administration — disagreed with that. "Stigma, to be honest, is more dangerous than the virus itself," announced WHO director-general Tedros Adhanom Ghebreyesus. At a hearing, US Secretary of Health and Human Services Alex Azar said "ethnicity is not what causes the novel coronavirus." The CDC issued a reminders that Asian people were not more at risk of spreading COVID-19.

This isn't the first time a whole group of people were blamed for the existence of a contagious disease. This phenomenon dates back to the 1300s, with the bubonic plague. "I can't think of a time when this hasn't happened, frankly," Matt Heaton, associate professor in Virginia Tech's history department, told Insider. "Racism and nationalism are pretty ubiquitous."

In medieval Europe, Jews were blamed for the Black Death. 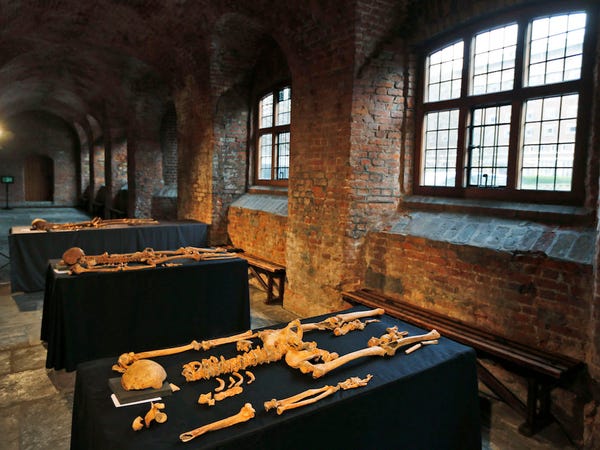 From 1348 to 1351, a pandemic raged in Europe, killing 25 million people. The disease killed so many people that it took until the 16 th century for the European populations to reach the levels it had been at prior to 1348. The plague spread via fleas that nested on the backs of rats, which were everywhere in medieval Europe. Once infected with the plague, victims would suffer from worsening flu-like symptoms until they died within a matter of days.

Anti-Semitic violence was so common that Pope Clement VI papal bull issued a papal bull proclaiming that the Jews were not at fault. The plague "afflicted and afflicts the Jews themselves and many other races who have never lived alongside them." He concluded that it was the particular alignment of Jupiter, Saturn, and Mars that was to blame, not the European Jews.

But the papal bull did not do much to stop the violence. While it is impossible to estimate how many Jews died, historical accounts of the deaths still remain.

In the 19th century, the Irish were blamed for typhoid, tuberculosis, and polio in the United States. 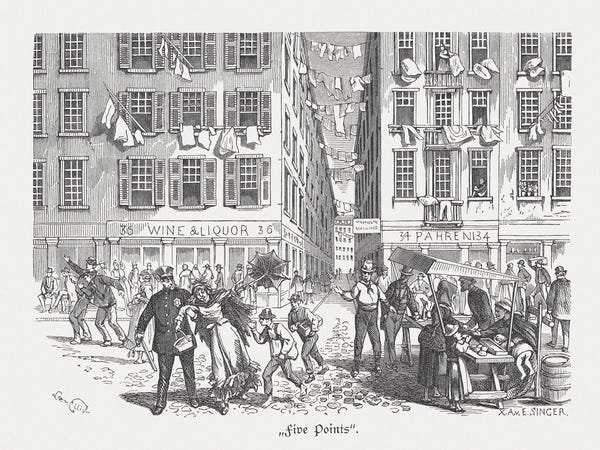 Since at least the 19 th century, there's been an American rhetoric of blaming perceived outsiders for disease, says Merlin Chowkwanyun, assistant professor at Columbia University's Mailman School of Public Health. That was when mass migration to the United States began, and there was a lot of anxiety as a result.

"One of the first groups of people that really gets blamed are the Irish," said Chowkwanyun. They were blamed for polio, tuberculosis, typhoid, and a host of other diseases.

Most of these Irish immigrants were working class, living in decrepit, unsanitary quarters, like the lower Manhattan 19th century neighborhood of Five Points. The neighborhood was notorious for being a hotbed of crime and infectious disease, and on one occasion, a case of cholera spread from that area to the rest of New York City.

"If you were poor, as most immigrants were, you were more likely to get a disease because you'd have to live in these settings," said Chowkwanyun. "All of these contagious diseases were very much linked to the kind of resources you had." 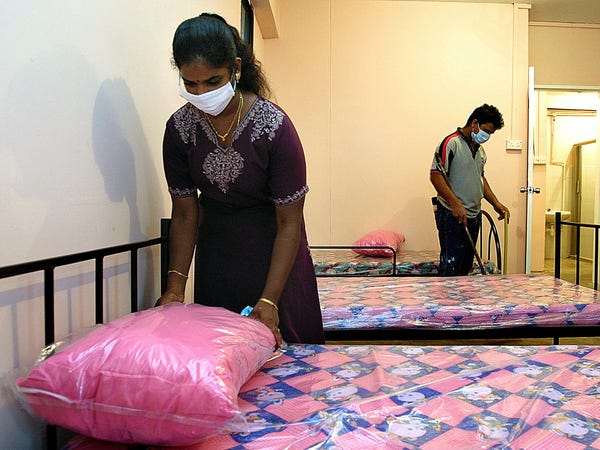 Like COVID-19, the disease originated in China, and that led to a rise in xenophobia targeted at Asian people.

"We tend to understand these events through our past disease rhetoric, which is rooted in fear, stigma, scapegoating," Josue David Cisneros, professor at University of Illinois at Urbana-Champaign, previously told Business Insider.

"Some of the US' first immigration laws were targeting Chinese immigrants because they were seen as racial, cultural, and biological threats, for example the Chinese Exclusion Act [of 1882]."

Cisneros noted that the SARS outbreak gave fresh momentum to anti-Chinese rhetoric. "Perceived biological threat is tied to a perceived cultural threat," Cisneros said. One study estimated that Asian-owned businesses lost 80% of their income because of SARS. 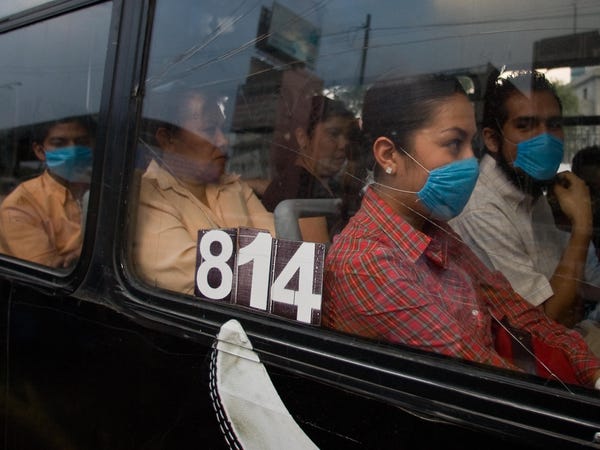 In 2009, H1N1, or swine flu, panicked the world. This particular strain of flu primarily affected young people, and the CDC reported that 80% of swine flu-related deaths were from people under 65. Worldwide, up to 575,400 people died during the swine flu pandemic.

As the news reported that the outbreak began on Mexican pig farms, Mexicans and other Latinx people began to be stigmatized by Americans fearing the disease. "Heavy media coverage of the outbreak likely helped to activate a broader set of fears which held that Mexicans and other Latinos might actually be spreading the disease," Michael McCauley wrote in a 2013 study.

"We tend to exist in social silos where we're surrounded by people who look like us, think like us, and act like us," Robert Fullilove, a professor of sociomedical sciences at the Columbia University Medical Center, previously told Business Insider. "We are innately suspicious of folk that we don't have contact with and we don't understand." That's why xenophobic views tend to spread during pandemics.

But 2009 was a particular bad time for Mexicans, as fears about Mexicans coming into America and taking American jobs were beginning to become national talking points.

"No contact anywhere with an illegal alien!" conservative talk show host Michael Savage said at the time, telling his listeners on how to avoid the swine flu. He added that this avoidance starts in the restaurants where people "don't know if they wipe their behinds with their hands!"

In 2014, panic around the Ebola outbreak was tinged with racism against Africans. 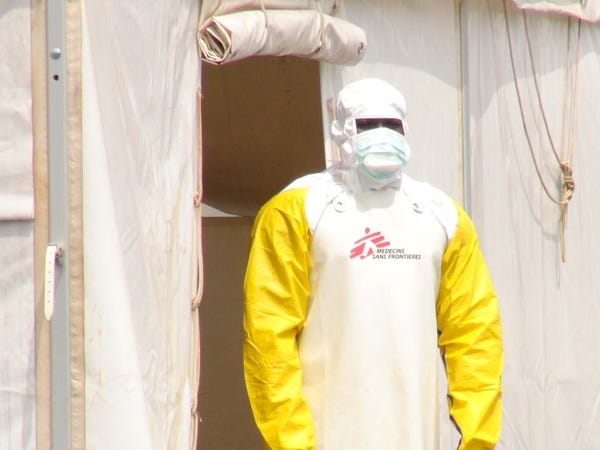 In 2014 there was an Ebola outbreak, which killed 11,000 people, five times more people than any Ebola outbreak prior. Ebola news quickly inspired panic, as people worried the disease would continue to spread globally.

In America, African immigrants were turned away from local bars and restaurants. Two Nigerian students were barred from attending Navarro College because of the threat of Ebola. The current CDC director had to clarify that he did not support a travel ban on parts of Africa.

"Africa has this long history, at least in the Western imagination, of being a very dangerous, diseased place," Heaton, who's been teaching courses on Ebola since the outbreak in 2014, told Insider.

Heaton said it dates back to the 1500s, when a lot of Europeans died of the diseases they were exposed to that they did not have immunities to, like malaria. "West Africa in particular was known as the white man's grave," said Heaton. "There was a very good chance you went there you were going to catch something that would have a major impact. If not, ultimately kill you."

There are hallmarks of that misconception today, Heaton said. He remembers that kind of rhetoric tinging discussions about limiting African immigration and canceling travel in 2014.

It's an issue the CDC is trying to combat now, with regards to racism towards people of Asian descent. In a highlighted box on the agency's website, it says: "It is important to remember that people, including those of Asian descent…are not at greater risk of spreading COVID-19 than other Americans."

Are Your Bath Bombs Vagina Safe?

The older, the thicker?