Home » Health News » They say laughter is the best medicine, but can it cure illness?

I'm lying on a bright orange cushion, trying to suppress my giggles. I've just spent an hour practising evil "he-he" throat giggles, producing hearty "ho-hos" and generating belly-deep "ha-ha" guffaws. I've walked around in a circle shaking hands with other people as we've shared laughs, and have launched into a warrior pose that ended in a roar of cackling.

As I lie here, it's time to let go of all that mirth and take a moment to meditate. But tiny snickers keep bubbling up to the surface, erupting into full-body chuckles. I'm not the only one who has the giggles; the people next to me are also trying to suppress theirs, to no avail. 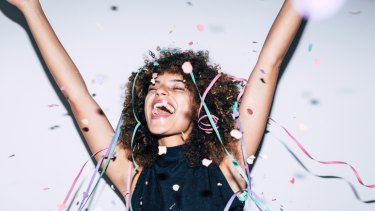 “When I’m laughing, I’m calling out to people that I’m having a good time.”Credit:Stocksy

This happens frequently, says Merv Neal, CEO of Laughter Yoga Australia, at the laughter yoga session I'm attending. Neal wasn't always in the laughter business, but when he was diagnosed with a potentially fatal blood disorder in 2002, he had an unexpected reaction: he couldn't stop laughing. His response took him by surprise, yet it felt so good he decided he wanted to continue laughing indefinitely. "And I haven't stopped."

When Neal recovered the following year, he decided to use laughter as part of a wellbeing program to maintain his health. He came across the work of Indian GP Madan Kataria, who, in 1995, created the laughter yoga concept.

Neal, who then worked in IT, decided to follow in Kataria's footsteps and begin teaching others. He's now been a full-time laughter yoga expert for more than 10 years, and says business is booming. "We're in this time when everybody's so stressed and so sick that they need different ways of helping them through these challenges. Laughter is one of them."

Laughter also has other benefits, Neal believes – it can boost your immune system, decrease blood pressure and improve mental health, among other outcomes. Neal has also been involved in studies that have found that laughter helps reduce chronic pain and has a positive effect on blood pressure in dialysis patients.

But there's a difference between having a genuine chuckle and faking it. Sure, laughter yoga starts by simulating mirth via exercises designed to get you warmed up. But the benefits, Neal says, lie in the real thing.

While I can't summon genuine guffaws at first, as the session goes on other people's laughter becomes contagious. One woman is repeatedly so overtaken by her own cackling she has to keep sitting down to wipe tears from her eyes. Soon, my body eases into "laughter mode", to the point that, when we lie down at the end, I genuinely can't stop giggling.

Being surrounded by so much mirth is what gives this practice its potency, Neal explains. "When I'm laughing, I'm calling out to people that I'm having a good time, and once they join me, we laugh together. It's a social communication response."

Once you've tried each type of laugh, swap between them. "If you do that over and over again, you'll start to break out into genuine laughter," says Neal. I leave my first laughter yoga session with a smile plastered on my face. My throat is dry from all that giggling and my cheeks feel stretched. There's something so freeing about being silly, letting go and having laughter ripple through my body. I'm no longer giggling any more, but I am infused with a deep sense of joy.

This article appears in Sunday Life magazine within the Sun-Herald and the Sunday Age on sale February 17.

Meet The Two Friends Behind #StyleNotSize