Cosy fires could raise your risk of dementia: They’re the trendy way to heat homes…but the pollution they cause may send your health up in smoke

Cooking a roast and making toast have just been identified as sources of air pollution, so we have now been advised to use extractor fans and leave windows open. But in many homes there is another potent source of air pollution: a wood-burning stove.

The stoves have become especially trendy in cities and towns — at least one home in six has one in South-East England. More than 1.5 million stoves are owned across the UK, with 200,000 more being sold every year, often marketed as a ‘green’ way to heat homes.

In fact, though, they create lethal pollution. An editorial in The BMJ last year warned that even modern stoves carrying government-approved ‘eco-friendly’ labels emit pollution at the same rate as 25 ten-year-old diesel lorries. 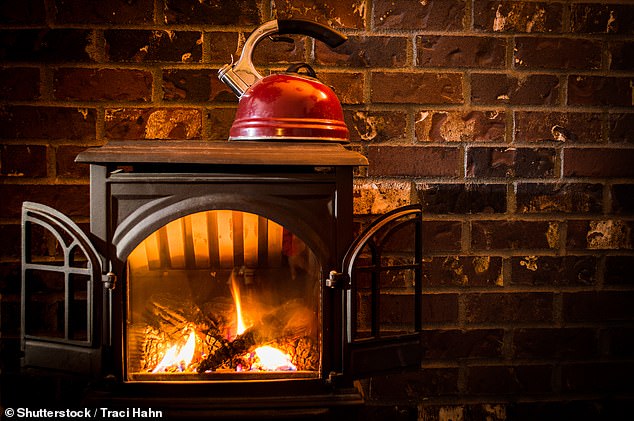 Danger? More than 1.5 million stoves are owned across the UK, with 200,000 more being sold every year, often marketed as a ‘green’ way to heat homes

Dr Gary Fuller, who runs King’s College London’s Air Quality Network, has reported how UK air research has detected high levels of the sugar levoglucosan, a by-product of burning wood, on weekends and evenings in winter.

Worse still are open fires. Air quality investigators at King’s College London found that more than two thirds of households that burn wood do so on such fires, even though this is banned in smoke-control areas created under the Clean Air Acts in UK cities including London, Edinburgh, Cardiff and Birmingham. The fine is up to £1,000 for burning wood in a grate, but enforcement is non-existent.

However wood is burned, the pollution it emits is the most dangerous kind — minute particles labelled PM2.5 (as they measure 2.5 micro metres or less — under one 30th of the width of a human hair).

These particles are too tiny to be filtered out by our nose and lungs, which can deal with larger particles such as pollen. Instead, studies have shown how PM2.5 particulates can enter the bloodstream, where they can cause serious illnesses including heart disease and dementia.

According to the Department for Environment, Food and Rural Affairs (Defra), about 38 per cent of UK particulate matter emissions come from burning wood and coal in domestic open fires and solid-fuel stoves, compared with 12 per cent for road transport.

A study by King’s College London last year found that wood-burning accounts for up to 31 per cent of PM2.5 produced in London.

Last month, acknowledging that domestic stoves and open fires are ‘the single biggest source of particulate matter emissions’, the Government announced measures to ‘clean up our air and save lives’. 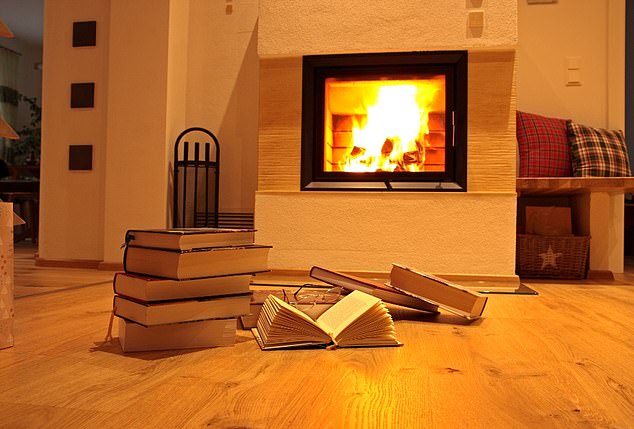 From 2022 only the ‘cleanest stoves’ will be available, and legislation will be introduced to prohibit the sale of the ‘most polluting’ fuels. Councils will be given ‘enhanced powers to increase the rate of upgrade of inefficient and polluting heating appliances’.

Last year, a team of cardiologists at the University of Padua in Italy studied medical data stored in the implanted defibrillators — devices that monitor and help to control abnormal heart rhythms — worn by more than 280 patients living in the Veneto region.

The team reported in the journal Lancet Planetary Health that, over nearly two years, the higher the levels of PM2.5, the higher the incidence of dangerous heart problems such as tachycardia (excessively rapid beating) and atrial fibrillation (irregular beats) patients experienced.

PM2.5 may cause heart disease both by damaging cardiovascular cells and by making blood more likely to clot, according to a 2012 Danish study which exposed human endothelial cells (which line the interior of blood vessels) to particulate matter from wood smoke and diesel fumes.

The scientists from Copenhagen University found that particulates from wood smoke induced much higher levels of damaging inflammation to these cells than diesel particulates. Woodsmoke particulates also made the cells much more likely to adhere to white blood cells — which can cause plaques that form lethal clots.

Investigators have already shown that cutting wood-particulate pollution can save lives from heart disease.

Three years ago, pollution experts at the Air Monitoring Board in Sacramento City examined the health effects of a wood-burning ban introduced in 2003 in the San Joaquin Valley, which had suffered some of the worst air pollution in Southern California. 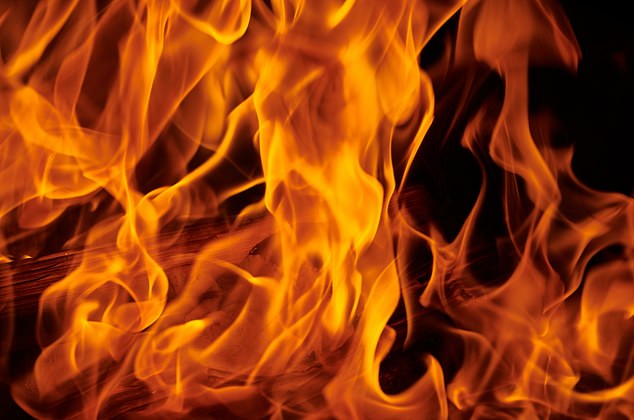 Did you know? Investigators have already shown that cutting wood-particulate pollution can save lives from heart disease…

Brains as well as hearts may suffer. Last year, Swedish scientists found an association between smoke from domestic wood-burning and dementia in a study that monitored more than 1,800 people in late middle age for 15 years. One possible reason for this is that smoke contributes to creating chronic inflammation in the brain, which may kill neurons and other brain tissue.

They reported in the journal BMJ Open that people living in areas in the top fifth of PM2.5 levels had a 40 per cent increased risk of being diagnosed with Alzheimer’s compared with those living in the bottom fifth.

With open fires, the damage may be doubly shocking. Not only do they pollute the outdoor air, but indoor air, too.

This year, a study led by Dr Ana Calvo, a chemist at the University of Leon in Spain, warned that a family fireside can be as dangerous as a mine or building site when it comes to carbon emissions. Clouds of PM2.5 particles are released, particularly when a fire is lit and as logs are first added, according to Dr Calvo’s study in the journal Science Of The Total Environment. It can take three hours to clear this pollution, even after opening a window.

As to the effect outside, last November a study led by Professor Chris Griffiths of Queen Mary, University of London, reported that while roadside levels of traffic pollution had fallen significantly since the introduction of the London low emission zone five years previously, roadside levels of PM2.5 had not been cut.

Nor had there been any reduction in asthma symptoms or underdeveloped lung capacity in London children. The report, in The Lancet, urges that traffic emissions be cut further — but other anti-pollution experts blame urban middle-class wood fires.

Simon Birkett, of the campaign group Clean Air London, points out that vendors such as petrol stations in clean-air zones openly sell firewood, which is illegal (though it isn’t illegal to buy the wood and burn it in a home outside any exclusion zone).

Defra has suggested that new wood-burning stoves should face stricter limits on emissions — but last month the Government assured homeowners that it won’t ban the expensive (and polluting) stoves they have already bought.

Tougher action is being taken overseas. Last October, authorities in Montreal, Canada, banned domestic wood-burning in all but the cleanest models of stove. Regulators there are looking to ban wood ovens in pizzerias, bagel factories and chicken grill houses.

British campaigners such as Simon Birkett want a complete urban ban here — and late last year the City of London Corporation announced it will try to gain stringent new powers from Parliament to crack down on air pollution from sources such as solid-fuel burning.

The days of that blazing fire in the hearth may be numbered.

HOW TO LIMIT THE DAMAGE

Open fires contribute more to pollution of the outdoor air than stoves (which burn hotter and create less smoke) — and they also pollute the air inside the home.

But with the evidence stacking up against both, what can you do to modify their potential threat to your health and the wider environment?

The type of wood you burn can make a difference. The Government’s proposed new guidelines on clean air, published recently, are not specific but suggest they will include restricting the sale of recently felled ‘wet’ wood that has not been allowed to dry, as it emits twice as much smoke as matured logs.

Meanwhile, new rules could be brought in to ensure wood-burning stoves are less polluting in future, though a complete ban seems unlikely.

How to Successfully Work from Home, According to Guys Who Do It