Alzheimer’s disease is the leading cause of dementia worldwide and a major cause of disability. Now, researchers at Osaka University and Hokkaido University have shown that repeated precipitation-dissolution events of salt crystals do occur even at low salt concentrations in nanoscales, and that it can accelerate the aggregation of the neurotoxic amyloid-β peptides implicated in its pathogenesis.

The human brain comprises around 86 billion neurons, roughly as many grains of sand as in a large dump truck. These neurons juggle electrochemical information as signals among the brain, muscles and organs to orchestrate the symphony of life from survival to self-awareness. Alzheimer’s disease disrupts this complex neuronal networking, causing functional disability and cell death. As yet uncurable, available treatments are symptomatic, supportive, or palliative; a breakthrough in understanding its pathogenesis may brighten the prospects for medication, diagnosis and prevention.

The role of amyloid in Alzheimer’s disease has long been recognized. Amyloid-β peptides are derived from amyloid precursor protein and they self-assemble into sizes ranging from low-molecular-weight aggregates and larger oligomers to amyloid fibrils. These last are known to be neurotoxic but recent research suggests that oligomeric disordered aggregates are also toxic, possibly even more than fibrils.

“Fibril aggregation begins with nucleation followed by an elongation stage,” explains Kichitaro Nakajima, lead author of this study. “Until now, the early stages of oligomer evolution have been difficult to study because of their morphologic variability, the timeframe for nucleation, and the lack of a suitable fluorescent assay.” 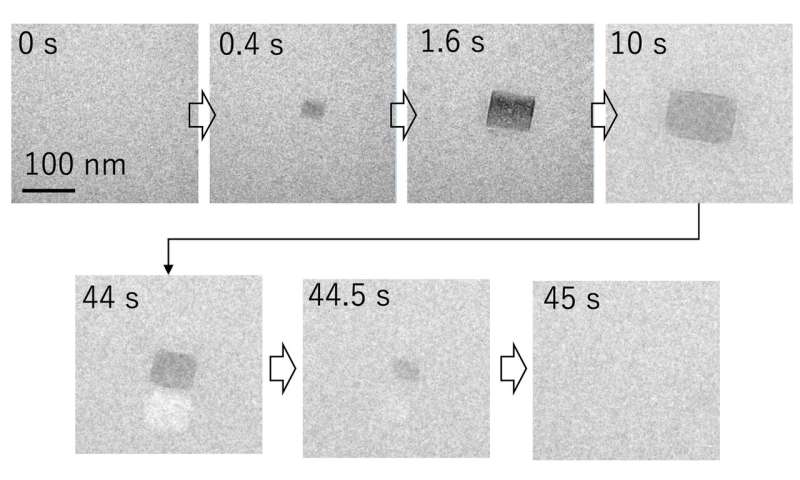 Using liquid-state transmission electron microscopy, the researchers analyzed the aggregation of protein molecules, acquiring time-resolved nanoscale images and electron diffraction patterns. “Remarkably, we discovered that a salt crystal can precipitate even at a concentration well below its solubility due to local density fluctuation, and its rapid dissolution accelerates the aggregation reaction of amyloid-β peptides,” says Professor Hirotsugu Ogi, the corresponding author. “This formation of temporary salt crystals provides a mechanism whereby proteins adhere to the surface of the crystal; as it dissolves, the interface shrinks, condensing the proteins at the vanishing point. This phenomenon resembles the aggregation acceleration by ultrasonic cavitation bubble. Proteins are attached on the bubble surface during the expansion phase, and they are highly condensed by the subsequent bubble collapses by the positive pressure of ultrasonic wave at its center. This is the artificial catalytic effect. Thus, in an autocatalytic-like nanoscopic aggregation mechanism, salt dissolution accelerates the aggregation reaction, and the aggregate itself can promote salt nucleation.”

Health: We should Peel and wash the bananas thoroughly with the hands!