Home » Health News » Taking too many vitamins cost me my liver

As a single mother with dependent children, sick days were a luxury I could not afford; I was focussed on putting food on the table and paying bills.

For what I believed would help me combat the impact of stress, I started taking supplements and vitamins such as horseradish and garlic, vitamin C and echinacea. Before long, I added grape seed, St John’s Wort and fish oil. 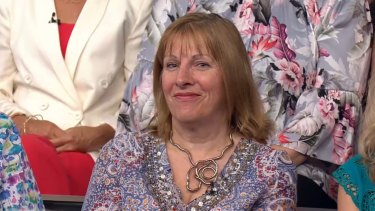 Annie Gilberthrope (in a still from tonight’s SBS ‘Insight’) was told by her doctors that excessive use of vitamins and supplements had contributed in large measure to her liver failure.

I was ready to do what it took to keep me working hard enough to maintain an adequate living standard for my family.

The "preparations" I was taking were readily available over the counter, and at no point did I ever imagine that they might be doing me any harm. I believed that they were keeping me healthy and functioning.

When I contracted what I believed was a 24-hour virus, and I added guarana to my supplement intake. The virus hung around, causing tiredness, but I was reluctant to take time to recover.

One Friday afternoon in a brightly lit bathroom at work, I noticed my eyeballs appeared very yellow in colour. I saw my GP that afternoon and he ordered immediate blood tests.

By the Sunday afternoon I was admitted to hospital with suspected liver damage. Within a week, I was transferred to Sydney's Royal Prince Alfred hospital, and told that I might need a liver transplant.

These words were among the last I would remember for nearly a week. During this time I was in a coma on life support, and at one stage my family were called in to say goodbye to me as a donor liver was unavailable.

In intensive care post-transplant a doctor and I discussed my supplement and vitamin intake. I was told that the load of supplements, as well as the virus, had caused irreparable damage to my liver.

The preparations I was taking were readily available over the counter, and at no point did I ever imagine that they might be doing me harm.

People take these preparations because they are "natural", I was told, "but so is funnel web venom".

After the transplant, I made important changes to my diet and lifestyle. These changes included yoga, exercise and massage for stress relief and overall physical health. I also made radical changes to my diet.

Out went alcohol, an occasional treat and processed meat. I reduced my salt, sugar, red meat and caffeine intake. My diet focus was vegetables, fish, grains and fruit. Indeed not much that my grandparents would not recognise.

I was and am grateful to be alive. I was very close to missing out on important family events: weddings, graduations and grandchildren. My life is precious and I intend to live as well as I can, which still includes working.

I still take supplements calcium and vitamin D on the advice of my doctors. I also take fish oil, glucosamine and magnesium with their full knowledge. I source my food carefully and try to gain the most nutrition through my food.

I am left with the knowledge that good health is something which should always be nurtured, and the most important focus of our lives. The way that it is maintained requires careful thought and care.

My philosophy now is, never take anything for granted and think about what you take, either as food or supplement. If in doubt if whatever you are considering taking is helpful or necessary, consult a doctor.

Annie is a guest on tonight's episode of Insight (SBS, 8.30pm) which asks: 'What is the evidence behind the vitamins and supplements we love to take? And do people even care?

Heart attack: The digestive condition that could double your risk – how to spot it