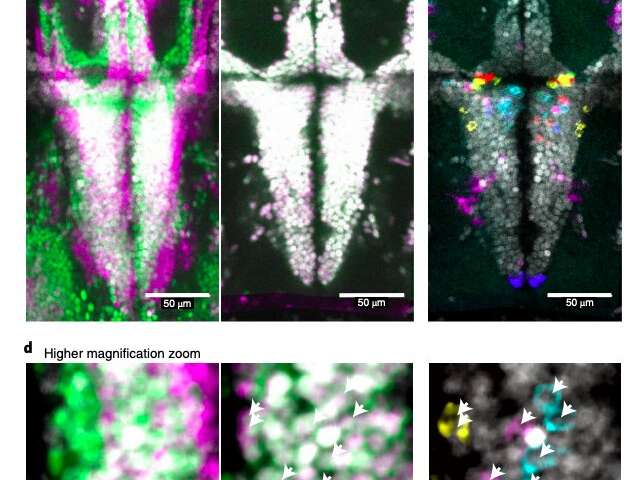 In vertebrates, animals that have a backbone or spinal column, many survival behaviors and physiological states are regulated by the hypothalamus. The hypothalamus is a region in the vertebrate forebrain located below the thalamus, which is known to coordinate the autonomic nervous system and play a part in the control of a number of vital body functions.

The hypothalamus includes different groups of cells transmitting chemical compounds that influence the activity of the brain and body in specific ways. These groups of cells are also known as neuropeptidergic cell populations.

While many neuroscientists have carried out studies investigating the function and structure of the hypothalamus, the ways in which different neuropeptidergic cell populations within it influence the behaviors of vertebrates is still poorly understood. Identifying the roles of these distinct groups of neurons could significantly enhance the current understanding of the hypothalamus’ many functions.

With this in mind, researchers at Stanford University and University of California, San Francisco have recently carried out a study exploring the role that multiple neuronal populations in the hypothalamus play in controlling defensive responses to homeostatic threats (i.e., factors hindering an organism’s ability to regulate internal conditions that promote its body’s health and functioning). Their paper, published in Nature Neuroscience, specifically examines neuronal populations in the hypothalamus of zebrafish, a species of freshwater fish often used as a vertebrate model in genetics, biology and neuroscience studies.

Some past studies have found that activating different populations of neurons in the vertebrate hypothalamus can result in specific survival behaviors such as food-seeking, water-seeking, fighting, parental or defensive behaviors. While these findings highlight the roles that these groups of neurons may play in eliciting specific defensive behaviors, they are not supported by recordings of activity when neurons are in a natural state.

More recently, some research teams have tried to better understand the activity of different neuropeptidergic cell populations in the vertebrate hypothalamus by analyzing the gene expression of individual neurons after different experiences to unveil associations between specific neuron populations and the expression of activity-dependent genes. However, the results of these studies were mixed and inconsistent. In addition, gene expression analyses only allow neuroscientists to identify neurons that are strongly active during a long period of time, thus, they are far from ideal for investigating rapid defensive behaviors that take place over limited periods of time, such as avoidance or escape.

In their study, the researchers at Stanford and UC San Francisco recorded and manipulated the activity of multiple neuron populations in the neuroendocrine hypothalamus of zebrafish as they responded to a variety of homeostatic threats such as heat, acidity and movement. More specifically, they applied a technique known as cellular-resolution calcium imaging to zebrafish larvae, as in this stage of development, their hypothalamic and neuroendocrine classes are easier to access.

Overall, the researchers observed that different groups of cells in the hypothalamus expressing specific genes worked together to promote defensive behavior. In fact, when all these cell populations were surgically removed, the zebrafish no longer tried to avoid threats in their environment.

The findings of this recent study offer valuable new insight about the role that specific classes of neurons in the hypothalamus play in enabling defensive behaviors in zebrafish and potentially other vertebrates. Combined with results collected in previous studies, the findings suggest that the hypothalamus is a highly flexible structure and that the behaviors it elicits can involve a large variety of cellular populations, as well as communication with other brain regions.

Vitamin D deficiency symptoms: The sign in your fingers you may lack the sunshine vitamin