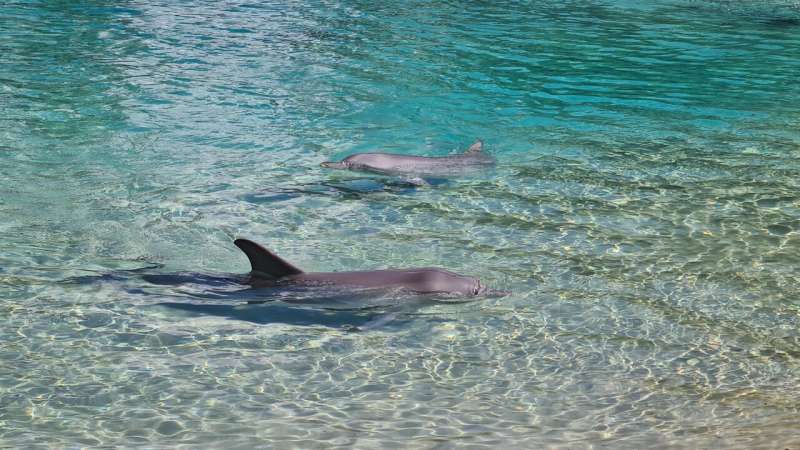 The brains of three species of stranded dolphins show classic markers of human Alzheimer’s disease, according to the most extensive study into dementia in odontocetes (toothed whales).

The new pan-Scotland research, a collaboration between the University of Glasgow, the Universities of St Andrews and Edinburgh and the Moredun Research Institute, studied the brains of 22 odontocetes which had all been stranded in Scottish coastal waters.

The study, which is published in the European Journal of Neuroscience, included five different species—Risso’s dolphins, long-finned pilot whales, white-beaked dolphins, harbor porpoises and bottlenose dolphins—and found that four animals from different dolphin species had some of the brain changes associated with Alzheimer’s disease in humans.

The findings may provide a possible answer to unexplained live-stranding events in some odontocete species. Study authors confirm the results could support the “sick-leader” theory, whereby an otherwise healthy pod of animals find themselves in dangerously shallow waters after following a group leader who may have become confused or lost.

Whales, dolphins and porpoises are regularly stranded around the coasts of the U.K. They are often found stranded in groups, or pods, in shallow waters and sometimes on beaches. While some animals can be moved to safer, deeper waters by teams of experts, other animals are less lucky and perish as a result. The underlying causes of live stranding events are not always clear, and research is ongoing to gain better insights.

For this study researchers examined stranded animals for the presence of the brain pathology that are part of the hallmarks of Alzheimer’s disease, including the formation of amyloid-beta plaques, the accumulation of phospho-tau and gliosis (a change in cell numbers in response to central nervous system damage). The results reveal that the brains of all of the aged animals studied had amyloid-beta plaques.

Three animals in particular—each from a different odontocete species—had amyloid-beta plaques as well as a number of other dementia-related pathologies in their brains, showing that some odontocete species develop Alzheimer’s-like neuropathology. However, the study cannot confirm whether any of the animals would have suffered with the same cognitive deficits associated with clinical Alzheimer’s disease in humans.

Lead researcher, Dr. Mark Dagleish from the University of Glasgow, said, “These are significant findings that show, for the first time, that the brain pathology in stranded odontocetes is similar to the brains of humans affected by clinical Alzheimer’s disease.

“While it is tempting at this stage to speculate that the presence of these brain lesions in odontocetes indicates that they may also suffer with the cognitive deficits associated with human Alzheimer’s disease, more research must be done to better understand what is happening to these animals.”

Co-author, Professor Frank Gunn-Moore from the University of St Andrews, said, “I have always been interested in answering the question: do only humans get dementia? Our findings answer this question as it shows potential dementia associated pathology is indeed not just seen in human patients. This study is also a great example of both different research institutes, but also different branches of the Life Sciences working together.”

Professor Tara Spires-Jones, University of Edinburgh, said, “We were fascinated to see brain changes in aged dolphins similar to those in human aging and Alzheimer’s disease. Whether these pathological changes contribute to these animals stranding is an interesting and important question for future work.”

All animals in this research were studied after a stranding event. Marine Scotland and Defra fund post-mortem examinations, via the Scottish Marine Animal Stranding Scheme (SMASS), of cetaceans (including odontocetes), pinnipeds and marine turtles that strand and die in Scottish coastal waters.

The paper, “Alzheimer’s disease-like neuropathology in three species of oceanic dolphin,” is published in the European Journal of Neuroscience.

You Need This Creamy Chocolate-Coffee Breakfast Shake In Your Life

Here's What Your Nails Reveal About Your Overall Health