A boy who developed a grapefruit-sized tumour on his spine while in the womb has defied doctors’ expectations to survive.

Harry Morris, now six months old, could have been aborted when his parents Maria, 27, and Jack, 25, found out about the growth on his back.

Ultrasound scans showed he had a huge teratoma tumour growing out of his body, but Mrs Morris refused to have a termination after it was suggested by a doctor.

Born by caesarean section in October, two months premature, Harry had to have a nine-hour operation to remove the tumour – which was never cancerous – but he has since recovered. 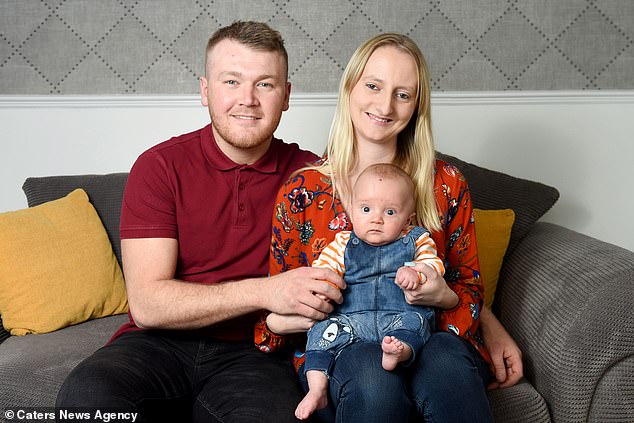 Jack and Maria Morris were told their son, Harry, was not likely to survive because he was found to have a giant non-cancerous tumour growing out of his back while he was in the womb 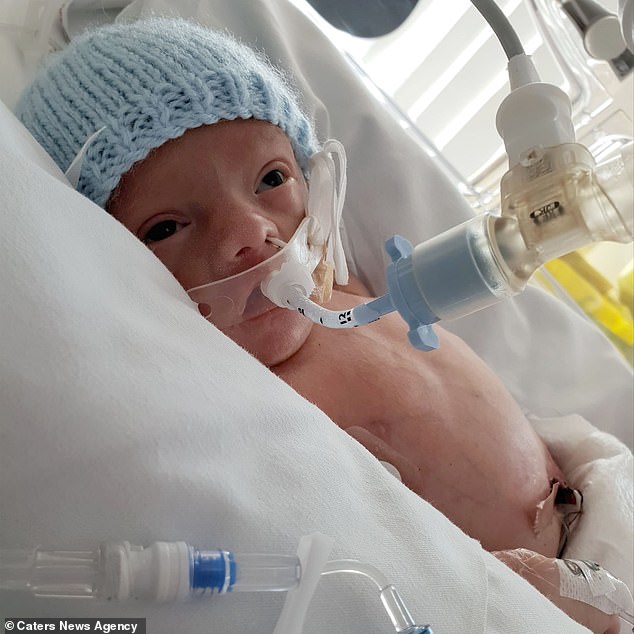 Harry (pictured in hospital as a newborn) was diagnosed with a teratoma, a type of tumour which is made up of various undeveloped human tissues including hair, skin and teeth

Mrs Morris, from Leigh in Wigan, Greater Manchester, had gone for a scan to try and find out the sex of their baby but were shocked to find out much more sinister news.

When it revealed the large tumour growing from the baby boy’s tailbone, she was advised to terminate the pregnancy.

The tumour was so large it was pressing on his internal organs, restricting his blood flow and putting extra pressure on his heart and leaving him with slim survival odds.

‘Harry’s tumour was nearly as big as him when we saw it on the scan,’ she said. ‘I was so shocked.

‘The midwife referred me to a specialist who basically said there was no hope for the baby as they were worried about the strain the tumour could be putting on his heart.

‘They then advised that termination may be the best option, so it wasn’t a great start to the pregnancy at all.’

WHAT IS A TERATOMA?

A teratoma is a tumour made up of germ cells which are formed while a person is developing in the womb.

Some 98 per cent of the tumours are benign, meaning they aren’t cancerous.

Because they are created from embryo cells which have the potential to turn into any type of human tissues, teratomas can contain fully formed teeth, hair, nails and skin.

They most commonly develop on the ovaries, testicles or tailbone, but can grow elsewhere in the body.

Teratomas growing from the tailbone are the most common type of tumour found in newborns and infants, although they are still rare, occurring in around one in 35-40,000 babies.

Symptoms of these can include constipation, problems urinating, abdominal pain, swelling and leg weakness.

Although not cancerous, large benign tumours can cause serious problems if they take up space inside the body and crush vital organs and blood vessels.

Most teratoma tumours can be removed with surgery when they are discovered. People with smaller tumours may not be diagnosed until adulthood.

Although Harry’s tumour wasn’t cancerous – only around two per cent of teratomas are – it was so large it was getting in the way of his development.

Teratomas, which are most common in the tailbone, ovaries and testicles, are tumours which grow from germ cells, which are cells produced by foetuses.

These germ cells have the potential to turn into any kind of tissue in the body, so teratomas can contain teeth, hair, nails and skin.

Teratomas which grow on the tailbone (sacrococcygeal tumours) are the most common tumour found in newborn babies, occurring in around one in 35,000 children.

‘His legs weren’t moving and the consultant couldn’t see anything below the chest in regards to the baby’s vital organs, Mrs Morris said.

‘Both myself and Jack are against termination, however, so the head midwife referred us to St Mary’s Hospital so I could continue the pregnancy and so it could be closely monitored.’

It was after another scan that Mr and Mrs Morrison were told Harry had a teratoma growing both internally and externally on his tailbone.

Symptoms of the tumour can include constipation, problems urinating, abdominal pain, swelling and leg weakness.

Mrs Morris said: ‘When they discovered it was a teratoma tumour, they wanted me to undergo an MRI scan. 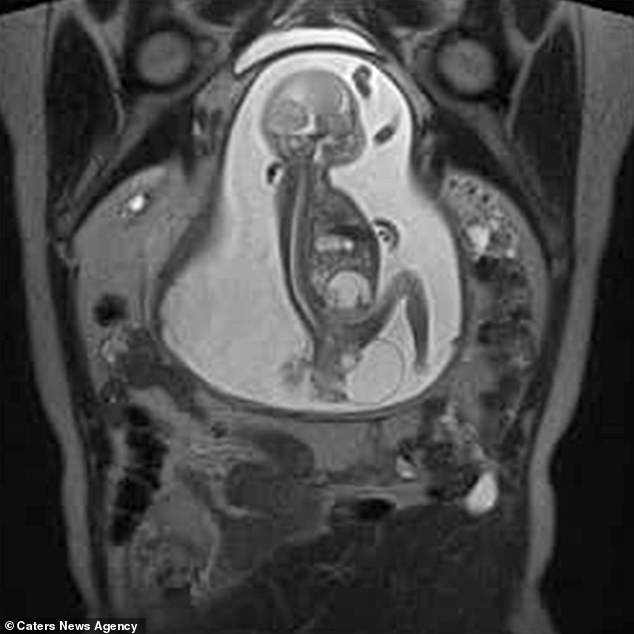 Ultrasound scans showed the tumour (seen as a transparent ball with a black outline beneath Harry’s leg), which led medics to suggest an abortion may be the couple’s best option 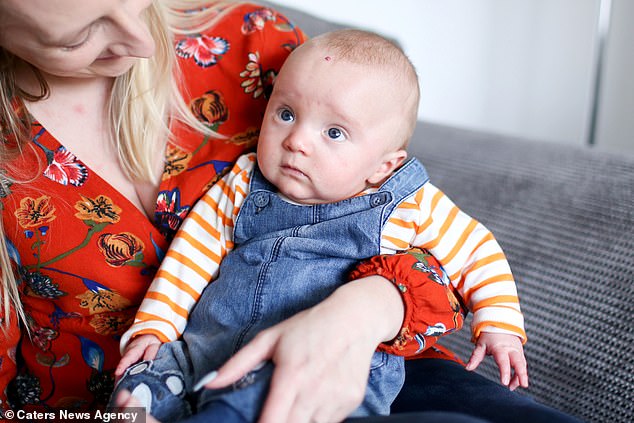 Harry (pictured recently) was born almost two months prematurely by caesarean section in October, and had surgery soon after the birth to remove his tumour

‘I went back two weeks later to Sheffield University Hospital for the scan and the tumour as doubled in size in that time – after that I was going to hospital every two weeks to track the tumour’s progress.

‘He was going to have surgery while still in the womb but in the end he didn’t need it as his heart was considered healthy enough to wait until after he was born which was a huge relief.’

Mrs Morris was due to give birth on December 6 but, after having contractions months earlier, she had Harry via c-section on October 9, 2018.

There were concerns Harry’s chances of survival after birth because he would need a major operation to remove the growth on his tailbone. 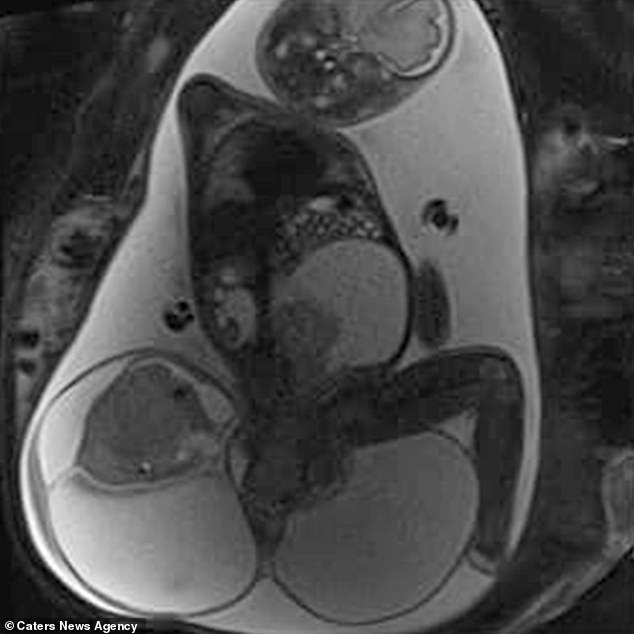 In this scan, taken when Mrs Morris was 30 weeks pregnant, Harry’s tumour – which looks like bubbles – can clearly be seen beneath his legs and appears to be bigger than his head

In addition to this, nobody knew how much damage the growth had already done to his internal organs.

Mrs Morris said: ‘Despite Harry being born earlier than expected, I was told his lungs were perfect for a premature baby which was such a relief to hear.

‘With that in mind, he underwent a nine hour surgery to remove the tumour when he was just two hours old.

‘It was hard having him taken straight off me when he was born, but I knew it would all be worth it in the long run.’

Harry was then kept in hospital for six weeks with Mr and Mrs Morris staying in the Ronald McDonald house nearby. 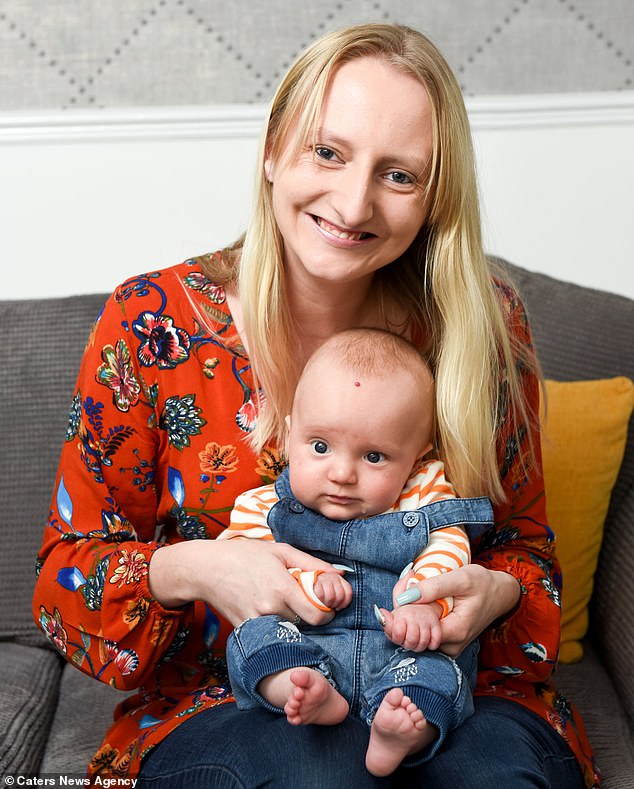 Despite Harry being born prematurely and with a large tumour attached to his back, he had a healthy heart and lungs and, after surgery, he has been able to go home with his parents 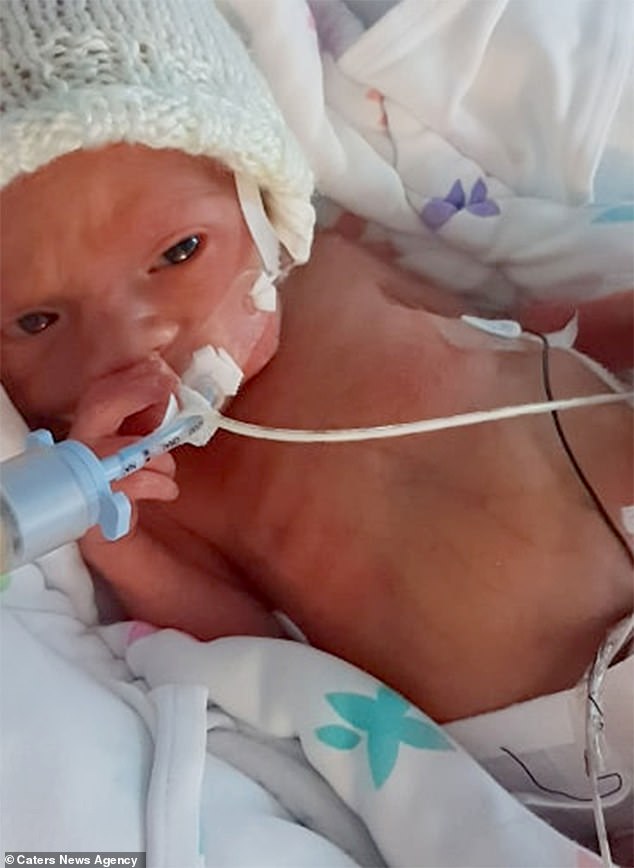 After the tumour was removed it was sent away for testing and, fortunately for the family, it didn’t contain any signs of cancer.

It had pushed his organs out of place during his development but, six months on, Harry is healthy and meeting the usual milestones for a baby his age, his parents said.

Mrs Morris added: ‘Jack and I are over the moon to have Harry with us – we’re so lucky that he’s been okay after the ordeal.

‘The St. Mary’s Hospital and the Ronald McDonald children’s home were fantastic in helping us getting our little boy home.’