It’s not just your mother’s eyes you inherited: Scientists discover genes for responsibility and conscientiousness get passed down from our parents

The arrival of a new baby is often met with parents proudly proclaiming it has their eyes, nose or mouth.

But research suggests children may even inherit how responsible they are from their mother and father.

A study of more than 700 siblings suggests DNA may influence the moral compass of the young more than their upbringing.

Scientists found closely-related siblings are more similar to their parents, even if their step brothers and sisters grew up in the same home.

The researchers stress, however, our genes just ‘give us potential’ and we can still ‘shape who we become’. 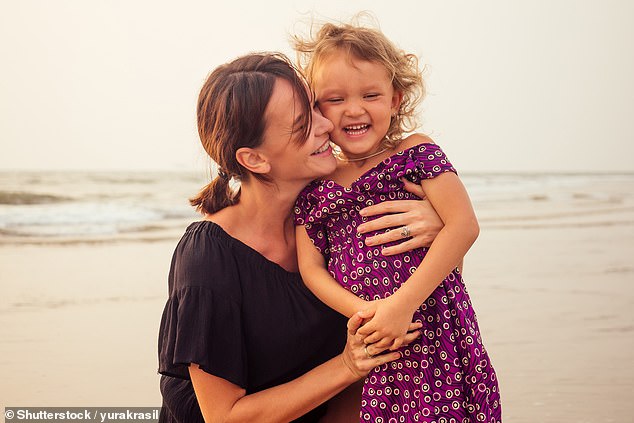 The research was carried out by The Pennsylvania State University and led by Amanda Ramos, a PhD candidate from the department of psychology.

‘A lot of studies have shown a link between parenting and these virtuous traits, but they haven’t looked at the genetic component,’ Ms Ramos said.

‘I thought that was a missed opportunity because parents also share their genes with their children, and what we think is parents influencing and teaching their children these characteristics may actually be due, at least in part, to genetics.’

To uncover the role of genetics, the researchers analysed 720 pairs of siblings aged 12-14.

By including a range of different types of siblings, who varied in how related they were, the researchers could get to the bottom of how big a role genetic and environmental factors play in influencing personality traits.

For example, identical twins share the same DNA, while step-siblings are unrelated but often live together.

BEING HYPERACTIVE MAY BE IN YOUR DNA

Being hyperactive may be in your DNA, research suggested last November.

Scientists identified more than 300 genetic mutations that raise the risk of the mental disorder by 19 per cent.

The mutations are thought to affect a sufferer’s central nervous system, which then influences their brain development and nerve cell signalling.

The findings – made by a team at SUNY Upstate Medical University in New York – may debunk critics who argue ADHD is just an excuse for bad behaviour.

‘Including multiple degrees of relatedness can give you more power to disentangle the genetic influences from the shared environment.’

The researchers measured how exposed the siblings were to ‘parental positivity’ – such as responsiveness and praise –  as well as negativity, like shouting and conflict.

When the participants reached 25-27 years old, the scientists then looked at how responsible and conscientious they were.

Results – published in the journal Behavior Genetics – revealed that while positive parenting was associated with children being more responsible and conscientious overall, the effects were stronger in the more closely-related siblings.

‘Essentially, we found that both genetics and parenting have an effect on these characteristics,’ Ms Ramos said.

‘The way children act or behave is due, in part, to genetic similarity and parents respond to those child behaviours.

‘Then, those behaviours are having an influence on the children’s social responsibility and conscientiousness.’

‘Most people assume that parenting shapes the development of virtuous character in children via entirely environmental pathways,’ she said.

‘But our results suggest there are also heritable influences.

‘This doesn’t mean that if parents are conscientious their children also will be regardless of how the children are parented.

‘It does mean, however, that children inherit a tendency to behave in a particular way and that this shouldn’t be ignored.’

Despite finding a genetic link to personality traits, the researchers stress your upbringing and surroundings also shape who you are.

‘Genes simply give you a potential,’ Ms Ramos said. ‘People still make their own choices and have agency in shaping who they become.’