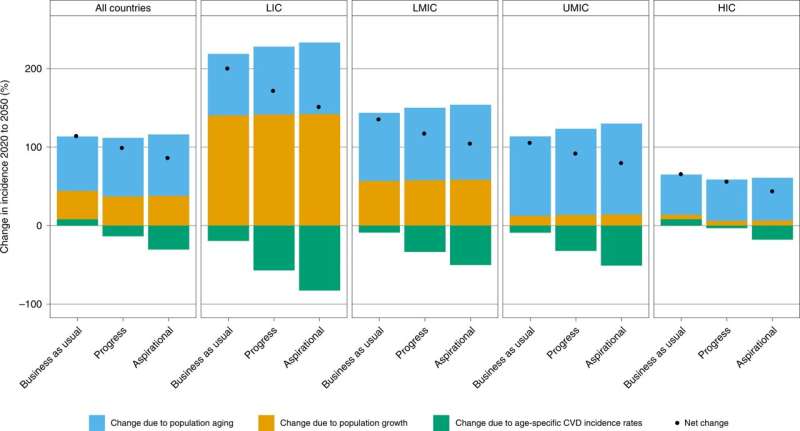 A team of researchers from the University of Washington’s Department of Global Health and the Resolve to Save Lives project, working with colleagues from the World Health Organization and Nanjing Medical University, is proposing an 80-80-80 target as a national hypertension policy after analyzing and modeling the results of population blood pressure controls. In their paper published in the journal Nature Medicine, the group describes their analysis of the effects of population-wide blood pressure goals, the models they used to study possible preventative goals and why they believe many lives could be saved if more countries adopted a specific goal.

Hypertension, also known as chronic high blood pressure, is a leading cause of cardiovascular disease, which kills many people around the world every day. In this new effort, the researchers noted that medical science has developed many therapies for successfully controlling hypertension, but despite such efforts, many cases go untreated. Their analysis of medical records from countries around the world showed that only one in five people with hypertension control their blood pressure with medicines. They suggest the reasons include lack of established medical facilities, lack of understanding of the problem in patients, and lack of public will to address the problem, particularly in underdeveloped countries.

To better understand the reasons behind less-than-optimal hypertension prevention and possible improvements, the researchers created a model based on what they describe as an 80-80-80 target—whereby 80% of people in a given area are tested for hypertension, 80% of those with hypertension are prescribed treatment and 80% achieve blood pressure level targets. The model was designed to show how many deaths could be prevented if this goal were achieved globally, and it showed the numbers could be as high as 76 to 130 million people saved.

At 56, people assume Susan is Matilda’s grandmother. But she’s her mum

How to live longer: ‘Right amount of vitamin D reduces risk of death’ – how much?