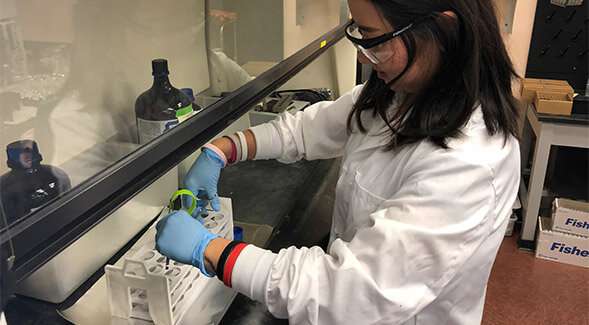 Young children are particularly vulnerable to the effects of tobacco smoke and other environmental toxins, but their exposure is often difficult and expensive to measure. The results of those measurements, however, can be crucial for research on the success of preventative measures.

Jenny Quintana and her research team at San Diego State University’s School of Public Health, have developed wristbands children can wear as an effective tool to measure nicotine exposure. Similar wristbands have been used to measure exposure to other toxins like pesticides and flame retardant, but never before for second-hand smoke in children.

“It is important to measure exposure in all groups, but children are often overlooked because it’s difficult to test them,” said Quintana, an SDSU professor. “Children are more challenging than adults, but if you don’t measure exposure well, you will not be able to tell if interventions or policy changes or other things actually worked and had an effect.”

After the seven days of usage, urine samples were collected from the children, a more traditional method of documenting exposure. The prevalence of metabolized nicotine in urine, cotinine, was compared to the nicotine measurements recorded by the wristbands. The tests revealed the two forms of measurement produced comparable results, meaning Quintana’s team had developed a simpler way of testing toxin exposure in children.

“We were extremely surprised with how well the data correlated,” said Quintana. “It is also amazing how well this worked with such simple instructions. We just told the kids to wear the wristbands.”

Quintana and her team determined that these silicone wristbands may become a useful tool for epidemiology and intervention studies of tobacco product exposure in children and adults in the future. Their findings are detailed in an article in the Journal of Exposure Science & Environmental Epidemiology.

“This is all exciting because it can potentially measure exposure in adults and exposure to more than just nicotine,” said Quintana. “We can now think about using these wristbands to measure other compounds such as car or truck exhaust and other air pollutants in impacted communities.”

Quintana’s work is representative of long-term efforts by SDSU researchers to measure second- and third-hand smoke in people of all ages. Quintana and a team at SDSU also studied residual tobacco effects on material items and exposure to third-hand smoke. They plan to continue this third-hand smoke research using the wristbands.

Eunha Hoh, a member of Quintana’s team and also a professor at SDSU, recently co-authored an article in Environmental Science & Technology with assistant professor Carlos Manzano. They used the wristbands to measure and track patterns of personal exposure to urban air pollution among people living and working in Chile.

Postpartum depression in fathers: Understanding the causes, symptoms and ways to manage

What is the real point of lockdowns?