David Smith had long been a competitive shooter, and he wasn’t going to allow a diagnosis of Parkinson’s disease to end his hobby.

The 46-year-old, now considered by Guns.com a “powerhouse on the competitive circuit,” and who just scored a spot at the 2019 World Rifle Shoot in Sweden, was first diagnosed with the crippling nervous system disorder eight years ago.

But rather than shrinking away, Smith confronted Parkinson’s head-on and developed what he calls “gun therapy” as a means to control the tremors that come with the illness.

And when he lifts his firearm to the ready, those debilitating shakes disperse. In the gun world, he is the “Parkinson’s Shooter.”

“The disease had taken away everything from me in terms of my ability to eat and drink or do anything without help. Shooting was all I had left, it was all I could do,” Smith told Fox News Thursday. “It made me feel normal.”

After signing up for his first competition soon after the devastating diagnosis, the Savannah, Georgia resident recalled that he went to fill out forms and felt relieved that while there were categories for females and those in military and law enforcement, there weren’t any specific categories for those with disabilities.

“I liked that even better. I didn’t want a special class. I want to compete with normal people and that is what I do,” he noted.

At the time of the diagnosis, Smith considered himself to have a strong “body-builder type” physique and good health – but that twitch in his finger wasn’t going away. For some time, the feeling of doom was debilitating and he ended up in a wheelchair. Although those around him kept cautioning him to “take it easy” and enjoy not working, Smith wasn't willing to stop pushing boundaries.

Before Parkinson’s surfaced, Smith – who worked in the scrap metal business – had been going to the range a few times a month for most of his life, but stepping it up changed his life.

VENEZUELANS REGRET GUN BAN, 'A DECLARATION OF WAR AGAINST AN UNARMED POPULATION'

Smith’s “gun therapy” is focused on neuroplasticity, where he can shoot repetitiously using intense focus, hand movement, control, and agility training, which entails running with his firearm and fast firing. His preference is shooting rifles rather than handguns, but he says both come with the benefits of steadying his hand. 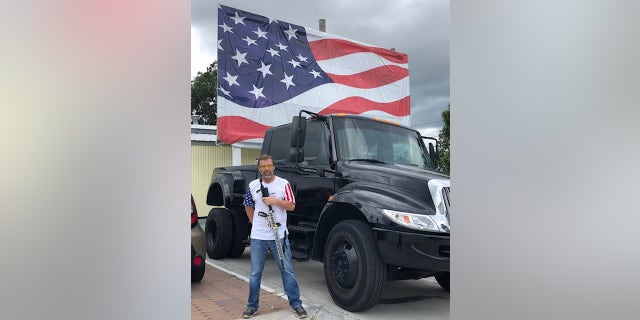 According to New York-based psychologist Dr. Norman Fried, while the label "gun therapy" may leave some Americans uncomfortable, a movement called "competitive shooting" may be implicated in healing some side effects for patients with Parkinson's disease.

“Through extreme dedication and long hours of practice, David Smith may have found a way to help his brain rebuild neural pathways – or reroute cortical connections – that were impacted by his disease. The dopamine rush that comes from this exercise may indeed be at the core of a movement to help some sufferers of brain injury to heal," he said.

After turning professional last year, he now spends more than half the month on the road and averages at least 20 competitions per year. Some are major, and others are at his local Savannah range. At the same time he's showing his prowess as a pro, Smith is also raising awareness of his “gun therapy” on the circuit and living life to the fullest.

Although based in Georgia now, he is preparing to move to Texas where he can dedicate more resources to enhancing his “gun therapy” technique.

“I have a couple of friends who have been diagnosed with it and it helps them,” Smith added. “It got me down for a while in the beginning, but I’m back. I’m winning.”