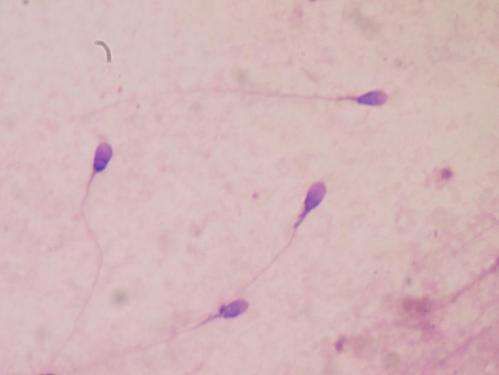 Over the last 50 years, a marked decrease in sperm count has been observed in the western world. But what about the situation in Switzerland? Up until now, no study had evaluated the reproductive health of Swiss young men. Researchers from the University of Geneva (UNIGE), Switzerland, working in collaboration with other institutions and with logistical support from the Swiss army, have undertaken the first nationwide assessment of the semen quality of men between the age of 18 and 22.

The scientists assessed three important parameters: the number of spermatozoa, their motility and morphology. The results were well below the reference values issued by the World Health Organisation (WHO). The current situation is a matter of concern, since the poor semen quality of Swiss men is associated with an increase in the incidence of testicular cancer. You can read about the study in the journal Andrology.

The number of infertile couples in Switzerland using assisted reproductive technology (ART) doubled from 3,000 to over 6,000 a year between 2002 and 2010. Causes can be due to men as well as to woman, however in 10-15 percent of the cases, infertility is unexplained. Several environmental and lifestyle factors can influence the couple’s fertility stress, alcohol or cigarette consumption to list a few. A determining factor in a men’s fertility is his semen quality.

Numerous epidemiological studies in industrialized countries over the past decades have shown a drop in semen quality with a particular decrease in the sperm concentration from 99 million per milliliter (ml) to 47 million per ml. “It’s important to understand that the time needed to conceive increase significantly if a man has a sperm concentration below 40 million sperm per ml,” explains Serge Nef, professor in the Department of Genetic Medicine and Development in UNIGE’s Faculty of Medicine. A man whose sperm concentration is below 15 million per ml can be considered subfertile and is more likely to encounter problems conceiving a child, regardless of the fertility of his partner. Infertility is defined as the inability to conceive after 12 months of regular unprotected sexual intercourse.

First national study on the quality of Swiss sperm

The UNIGE researchers conducted the first national study on the quality of Swiss sperm by analyzing the profile of 2,523 young men aged 18 to 22 as part of their military recruitment. The men came from every canton in Switzerland and were conceived and born in the country. They completed a questionnaire about their health, lifestyle, diet and education. In addition, their parents filled in a questionnaire about their own lifestyle, diet, health and the course of the pregnancy. This was designed to assess the conditions under which gestation took place and to evaluate the possible impact on the reproductive health of the young men. Semen quality is defined by three important parameters: the sperm concentration (number of sperm per ml), their motility and morphology. “Low semen parameters values can reflect a men’s fertility, when a combination of values are low, a men’s ability to conceive is at risk,” says Rita Rahban, a researcher in the Department of Genetic Medicine and Development and the study’s first author.

The researchers analyzed the semen samples of the volunteers by measuring the semen volume and the sperm concentration, motility and morphology.

Swiss sperm: bottom of the league

Sperm counts vary from one country to another, with median concentrations ranging between 41 to 67 million per ml for young European men. By way of comparison, Swiss men with 47 million per ml are at the bottom of the pack alongside Denmark, Norway and Germany.

Based on the WHO thresholds established in 2010, the results of the study indicate that 17 percent of young men had a sperm concentration below 15 million per ml and 25 percent had less than 40 percent motile spermatozoa in their ejaculate. The rate of morphologically normal forms was below 4 percent in 40 percent of the subjects. The study as a whole revealed that at least one of the three parameters (concentration, motility and morphology) was below the WHO thresholds for 60 percent of men, and that 5 percent had a problem concerning these three factors at the same time.

“We need to be cautious about a single semen analysis,” points out Dr. Alfred Senn, an andrologist and co-author of the study. “It isn’t entirely predictive of a person’s fertility. But, in overall terms, the results suggest that the sperm quality of young men in Switzerland is in a critical state and that their future fertility will in all likelihood be affected.”

The study did not identify differences in sperm quality between Switzerland’s various geographical regions, linguistic areas, as a proxy for different lifestyle factors. There was also no differences between urban or rural regions. However, maternal smoking during pregnancy was found to be associated with a decrease in sperm quality, as professor Nef adds: “Subfertility was found to be more common among men who were exposed to maternal smoking during embryonic development.”

Is there a link between sperm quality and testicular cancer?

The Geneva-based researchers also used the study to identify a correlation between poor semen quality and increased testicular cancer in Switzerland. “For 35 years, testicular cancer has grown steadily to over 10 cases per 100,000 men, which is very high compared to other European countries. Sperm quality is generally lower in countries where the incidence of testicular cancer is high,” says professor Nef. This is almost certainly the result of altered testicular development at the fetal stage, prompting the scientists to further investigate this area.