Hospital pharmacies are more likely to get BURGLED if there is a no-deal Brexit, trust warns amid concerns about NHS drug shortages

A no-deal Brexit may raise the risk of hospital pharmacies being burgled by patients desperate for medicines, a hospital trust has warned.

London North West University Healthcare NHS Trust is considering putting extra CCTV in its pharmacies in response to the threat.

The trust, which runs the Central Middlesex, Ealing and Northwick Park hospitals in the capital, revealed the concerns in its Brexit contingency plan.

The claim comes amid fears there will be drug shortages if no deal is made, a threat of blood donation sessions being cancelled, and the Health Secretary, Matt Hancock, saying medicine would be prioritised over food if imports were disrupted. 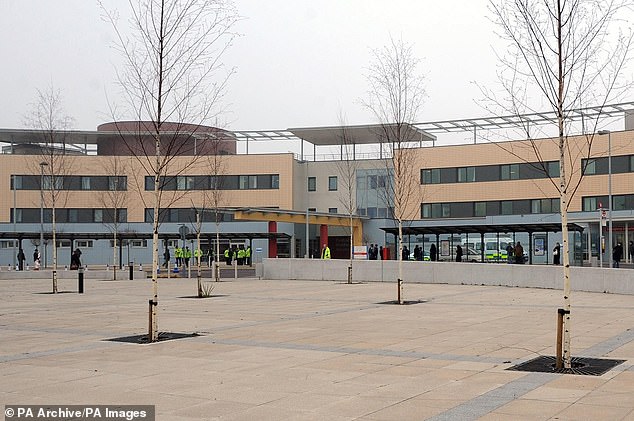 London North West University Healthcare NHS Trust, which runs Central Middlesex Hospital (pictured) is considering putting extra CCTV in its pharmacies because it believes a no-deal Brexit will leave it at risk of burglary

The trust’s plan, seen by the Health Service Journal, also had drawn up a policy for ‘anxious’ patients who asked doctors to hand drugs over.

According to the specialist website, the trust wouldn’t explain exactly why it believed no-deal would leave it at an ‘increased risk of burglary’.

Medicines would be used off-label – prescribing for conditions they aren’t intended for – if there are shortages, the plan revealed.

And the trust, which turns over £700million per year, is joining forces with others in north-west London in an agreement to share ‘vital medicines’ if any of them run out.

Pharmaceutical companies have been stockpiling important medicines for months – Mr Hancock said a large proportion of the NHS’s supplies come from the EU.

If the UK doesn’t secure a trade deal there are fears imports could be disrupted as deliveries struggle to get across borders.

Insulin supplier Novo Nordisk revealed in September it was stockpiling four months’ worth of the hormone to ensure an uninterrupted supply for diabetics in the UK.

Medicine shortages are already ‘putting people at risk’ with rising numbers of common drugs being so hard to get hold of the Government is having to pay extra.

Eighty drugs were so low in stock last month that the Department of Health was, in some cases, paying a price 45 per cent higher than usual and racking up thousands in added costs.

Among them were blood pressure pills and anti-inflammatories, and some patients are being told to go back to their doctor to ask for something different.

Global demand, the cost of ingredients and new regulations are all possible reasons why pharmacies are struggling to get hold of certain medications.

And there is disagreement between experts over whether uncertainty about Brexit is worsening the situation, which has been called ‘a threat to patient safety’.

‘It’s astonishing that there remains so much uncertainty for patients more than two and a half years after the Brexit vote,’ he said.

‘This could be the biggest disruption to patient safety we have ever seen.’

The list of medications already in short supply in December was six times higher than it was three years ago, with 80 common drugs running low.

This sends prices upwards as demand outstrips supply and the NHS has been force to pay as much as 45 per cent over the odds for hard-to-get medicines.

Ash Soni, president of the Royal Pharmaceutical Society, said he had never seen so many common drugs affected by shortages.

He said: ‘The items are out of stock and unavailable. Patients are having to wait.

‘We’re having to send some patients back to the GP to get a different prescription, because we just can’t fill them.’

But patients are warned not to try and stockpile for themselves at home, and to consult their GP or pharmacist if they’re worried about running out.

London North West has also raised concerns its patients might go into A&E departments if they can’t get their medicine at a pharmacy.

A&Es are notoriously busy in the winter and early spring so an extra reason for people to go would likely be unwelcome for hospitals.

In other concerns about Brexit’s impact on the NHS, the Blood and Transplant service this week tried to arrange the cancellation of blood donation sessions in Kent.

It said six sessions could be called off in Folkestone and Dover surrounding March 29 because of concerns about traffic building up around the channel crossing.

But the Department of Health and Social Care overrode the announcement hours later and said: ‘The Department does not agree with this course of action.

‘We’ve discussed this issue with NHSBT and confirmed blood donations will continue as normal.’

Importance of Differentiating Between Leucine and Isoleucine