Spending more time in the sunshine could protect you against dementia, a study suggests.

Exposure to the sun causes the body to make vitamin D, which has been linked to lower levels of inflammation and stronger bones in old age.

Now a first-of-its-kind study has shown that people with high levels of the sunshine vitamin in their brain are also 33 percent less likely to develop dementia.

Americans living in cold states are advised to take vitamin D supplements, but research shows taking too much can be toxic. 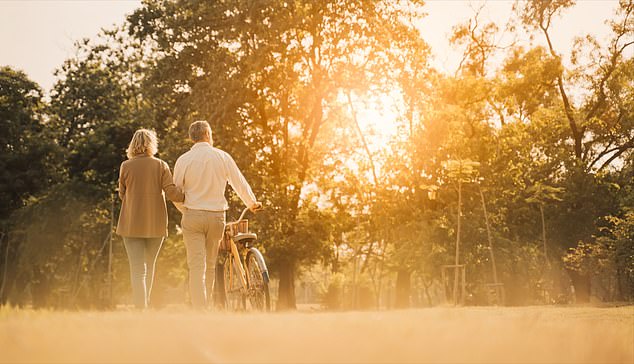 In the latest study, researchers examined samples of brain tissue from 290 people in the Rush Memory and Ageing Project, a long-term study of Alzheimer’s disease that began in 1997.

Participants had their cognition assessed yearly using a series of tests until their death, after which the volunteers donated their brains, spinal cords and muscles.

Researchers also looked over the results of their last cognitive assessment before death.

What is vitamin D and how do I get it?

Vitamin D is a type of vitamin that the human body gets from both diet and produces when exposed to sunlight.

What does it do?

It helps regulate the amount of calcium and phosphate in the body.

These nutrients are needed to keep bones, teeth and muscles healthy.

People who don’t get enough vitamin D can suffer from bone deformities such as rickets in children and osteomalacia (a softening of the bones) in adults.

How do I get enough vitamin D?

In the UK most people will get the vitamin D they need from sunlight between April and September as long as they go outside.

The body naturally produces vitamin D when exposed to sunlight.

Vitamin D is also found in foods such as oily fish, liver and egg yolks.

Do I need to take a supplement?

The NHS says people should consider taking a vitamin D supplement in the winter month when sunlight is weaker.

Other people may need to take vitamin D throughout the year due to being housebound, or if they have dark skin which reduces the amount of sunlight their skin absorbs.

How much should I take?

The NIH advises 600IU a day is enough for most people.

But those over 70 years old should ensure they get 800IU, the NIH said.

No participants had dementia when they joined the study, but by the time 113 had been diagnosed by the time they passed away, while 68 had mild cognitive impairment.

Tissues from four brain regions were analyzed for vitamin D levels and signs of dementia.

Two of the regions were associated with changes linked to Alzheimer’s, one with forms of dementia linked to blood flow, and one region not known to have any associations.

Medics undertaking the analysis were blinded as to which participants had dementia or cognitive impairments. Answers were then compared to the final clinical assessment of cognition before death.

Results showed that people with higher vitamin D levels in the brain were between 25 and 33 percent less likely to be diagnosed with dementia.

But these individuals were no less likely to have protein clumps in the brain linked to the disease.

These were amyloid plaques, Lewy bodies or chronic or microscopic stroke evidence.

They found that vitamin D was present in brain tissue, and high vitamin D levels in all four regions of the brain correlated with better cognitive function.

However, the levels of vitamin D in the brain did not associate with any of the physiological markers associated with Alzheimer’s disease in the brain studied.

This means it is still unclear exactly how vitamin D might affect brain function.

Dr Sarah Booth, a clinical nutritionist at Rush University who led the research, said: ‘We now know that vitamin D is present in reasonable amounts in human brains, and it seems to be correlated with less decline in cognitive function.

‘But we need to do more research to identify the neuropathology that vitamin D is linked to in the brain before we start designing future interventions.’

She added: ‘This research reinforces the importance of studying how food and nutrients create resilience to protect the aging brain against diseases such as Alzheimer’s disease and other related dementias.’

The study was published today in the journal Alzheimer’s and Dementia: The Journal of the Alzheimer’s Association.

Most Americans need about 600 international units (IU) of vitamin D a day, according to the National Institutes of Health.

This can be achieved through spending time outside, or eating a balanced diet filled with vitamin D rich foods.

One salmon fillet contains all the vitamin D needed for the day.

But estimates suggest up to 42 percent of Americans are deficient in vitamin D. About 6.5million are also suffering from dementia.

DR MICHAEL MOSLEY: Can eating too much be a sign you lack nutrients?

Dementia and poor appetite: Four tips to get someone with dementia to eat more