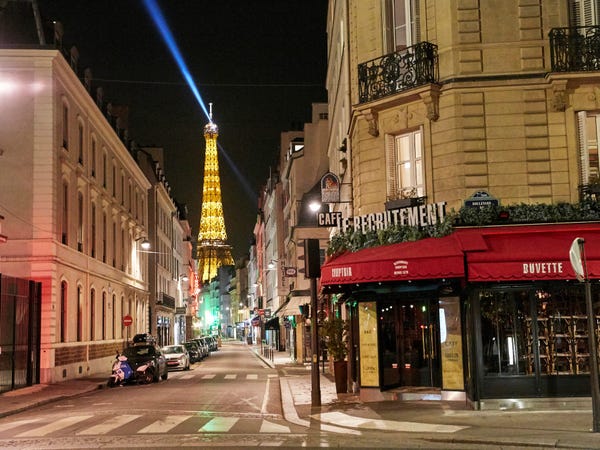 Since Paris declared a state of emergency on October 17, introducing a 9 PM to 6 AM curfew, the streets have been eerily empty at night.

The city's police were diligent about handing out fines for infractions earlier in the pandemic to people who weren't wearing a mask or violated quarantine, and most residents don't want to risk it now.

On the face of it, it looks like the strict measure — set to last at least six weeks to curb the soaring rates of coronavirus in the capital and across the country — is working.

With clubs closed, and bars and street parties off-limits, this has now become the norm for socializing, mainly among people in their 20s. Speaking to Insider, four Paris party-goers said the curfew felt so heavy-handed and "totalitarian" that it is driving them to party in any way they can, from warehouse raves to all-day and night house parties.

"For young people, not feeling the risk of the coronavirus, this measure is one measure too many," Clem, a 23-year-old in Paris who asked to omit her last name for privacy reasons, told Insider.

Keeping it a secret

In some cases, these parties are essentially very long house parties.

Clem is going to a housewarming this weekend that will run from noon until 8:59 PM, with the option to stay longer if you are willing to go all night.

"You just have to be ready to party from noon til 6 AM," Clem told Insider.

There are bigger parties, too, organized through word of mouth or on Facebook.

"The basic premise is that you are given a code," they said. "You then text the code to a phone number and details are sent to you of where to go. It's a car park location on the outskirts of Paris. Then a taxi or bus picks you up and takes you to the party."

Those kinds of big organized raves can be a gamble. Clem planned to go to a secret two-day rave last week, organized through Facebook, but the police turned up halfway through (on Saturday at 11 AM).

Certain groups are eligible for exemptions to the curfew rule, including food delivery drivers.

That has led to a spate of jokes on Instagram and Twitter, suggesting people buy jackets from Deliveroo, the biggest food delivery service in Paris, to skirt the rules.

Insider spoke to one 26-year-old art student in Paris who did just that.

The student, who did not want to share his identity for fear of getting fined, told Insider he bought it on eBay for €39. "People were joking about it but I found one and I thought, why not? If it means I can see my friends and not be worried. I have not used it yet, but I will. It's kind of cool anyway so I don't mind if I don't really need it for the curfew."

It seems he may not need it; a 27-year-old Paris resident who spoke to Insider said she has been getting Ubers after curfew without a problem. Ubers are allowed to run after-hours in service of people with exemptions, but she said the drivers "never" ask to see proof, and police don't check.

Police are playing whack-a-mole with parties

Parisian police are likely aware of the situation, just as they were about the notorious weekendly rave in Bois de Vicennes, a park in the southeast of Paris that hosted DJs and thousands of people from May to September to replace the shuttered clubs.

"It was not official, it was not legal, but it was OK because it was happening all the time and the cops would just come at 8 AM," Clem told Insider. "We had a great DJ, we would rave all night, and then you have the cops coming in the morning when everyone is going home."

Since curfew began, cops have been turning up to some choice raves here and there, but their directive is to patrol the streets.

They can be seen stationed outside subway entrances at the start of curfew each night, but, of the six people Insider asked, none had seen police activity beyond that.

COVID-19 cases are rising in France

Despite the push-back, President Emmanuel Macron is doubling down.

The nightly curfew, first mandated in eight regions of the country, was recently extended to another 38 last week. It now affects over half of France's 67 million residents.

Until at least December 1, people living in curfew zones will be barred from leaving their homes during those hours, unless it's to walk a dog, go to work, or for essential travel.

Case numbers give a hint as to why. France recorded 52,000 new cases on Tuesday, a daily high. Before September, the highest number of cases recorded in a single day in France was 8,000, on March 31.

That quickly plummeted. From May to August, there was never more than 2,000 a day, and usually just a couple of hundred. During August, however, there was a surge, culminating in 4,982 cases recorded on September 1. Things unraveled from there.

A key gripe among Paris residents is that the curfew seems nonsensical.

"It's worse to stay at your friend's all day or all night," than to have small gatherings on the street, Clem said.

Scientists across the world, including at the World Health Organization and the US Centers for Disease Control and Prevention, agree that coronavirus likely acts differently indoors than it does outdoors, thriving in poorly ventilated indoor spaces.

While some cities (such as Marseilles, an early hot spot) have a ban on gatherings of 10 or more, in Paris, up to 1,000 people are allowed to gather.

Tonight, however, Macron will address the nation anew. He is expected to bring in tighter measures, including gathering limits in more cities, and possibly instituting a nationwide lockdown, according to the Guardian.

Young Parisians are angry and tired

No one wants their party shut down by police. But few seem to mind that this is an open secret. In a way, Clem said, they want the authorities to know.

"We're trying to send a sign to the government. We can't stand this, this is too much. It's like a totalitarian state."

A better messaging strategy from the government could help, said Vaile Wright, director of clinical research at the American Psychological Association.

"Instead of it being something taken away, it needs to be framed in the sense of community and civic duty and coming together as humans to stop the spread," Wright said.

Having a clear message in a constantly shifting pandemic is difficult, and each time it changes, public trust is eroded a bit more.

"Science can change, and that's a really confusing message for people," Wright told Insider. "Different places are doing different things, and things keep changing in response to a very uncertain situation. All that lends itself to confusion, distrust, and those feed into behaviors that may not be in our best interest."

But as we've learned from other areas of health behavior, any kind of regimen is hard to stick to.

Kyle Bourassa, a psychology researcher at Duke University, likens the lockdowns to a diet regime — people are good at getting weight off initially, but very bad at keeping it off long term.

"There's the constant draw of seeing family and friends that makes it so hard. The long term was always going to be hard for us," Bourassa said.

Since the pandemic started, Clem said, everyone she knows has been diligently trying to comply with the rules.

"People were really embracing everything."

But with the curfew, she felt a shift.

"This was something that really broke something in young people. People are struggling to keep jobs, how we live. People are laughing about us having all-night parties but — you will put some measures, we will do worse."

Love and hate in the mouse brain

Kate Upton Adorably Incorporates Her Daughter into Her At-Home Workout