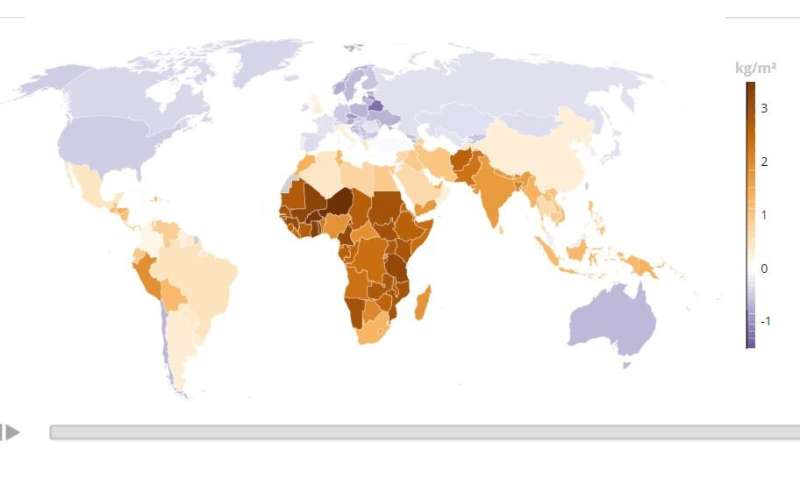 Obesity is increasing more rapidly in the world’s rural areas than in cities, according to a new study of global trends in body-mass index (BMI).

The research, led by Imperial College London and published in Nature, analysed the height and weight data of more than 112 million adults across urban and rural areas of 200 countries and territories between 1985 and 2017.

Height and weight can be used to calculate BMI, an internationally recognised scale which tells us whether an individual has a healthy weight for their height.

The study, involving a network of more than 1000 researchers across the world, found that from 1985 to 2017, BMI rose by an average of 2.0 kg/m2 in women and 2.2 kg/m2 in men globally, equivalent to each person becoming 5-6 kg heavier. More than half of the global rise over these 33 years was due to increases in BMI in rural areas. In some low- and middle-income countries, rural areas were responsible for over 80 per cent of the increase.

These trends have led to striking changes in the geography of BMI over the three decades. In 1985, urban men and women in over three quarters of the countries had a higher BMI than their rural counterparts. Over time, the gap between urban and rural BMI in many of these countries shrank or even reversed.

“The results of this massive global study overturn commonly held perceptions that more people living in cities is the main cause of the global rise in obesity,” explains senior author Professor Majid Ezzati of Imperial’s School of Public Health. “This means that we need to rethink how we tackle this global health problem.”

The team found important differences between high-, middle-, and low-income countries. In high-income countries, the study showed that BMI has been generally higher in rural areas since 1985, especially for women. The researchers suggest this is due to the disadvantages experienced by those living outside cities: lower income and education, limited availability and higher price of healthy foods, and fewer leisure and sports facilities.

“Discussions around public health tend to focus more on the negative aspects of living in cities,” says Professor Ezzati. “In fact, cities provide a wealth of opportunities for better nutrition, more physical exercise and recreation, and overall improved health. These things are often harder to find in rural areas.”

Meanwhile, rural areas in low- and middle-income countries have seen shifts towards higher incomes, better infrastructure, more mechanised agriculture and increased car use, all of which bring numerous health benefits, but also lead to lower energy expenditure and to more spending on food, which can be processed and low-quality when sufficient regulations are not in place. All these factors contribute to faster increase in BMI in rural areas.

The main exception to the global trend was sub-Saharan Africa where women gained weight more rapidly in cities, possibly because of more low-energy work (such as office work), less need for physical domestic tasks such as collecting firewood and fetching water, shorter commutes and greater access to processed foods.

Regional and country data on BMI in rural and urban populations

Meet the Games Makers: 'Sport filled a hole that was missing in my life'