Do YOU know how big your food portions should be? From two cupped hands of pasta to a £1 coin worth of spaghetti and two thumbs of cheese, nutritionists launch portion size guide to tackle overeating

Nutritionists have launched a new guide to tackle big portion sizes in a crackdown on obesity.

The guide uses hands, fingers and thumbs as imagery to show how much people should be eating, removing the inconvenience of using scales.

As health officials continue to warn about the rising obesity figures, people remain unaware of how much calories they are really consuming.

Most don’t think about our portion sizes, the experts who created the guide said, and doing so could relieve pressure on the NHS.

The guide, created by the British Nutrition Foundation, sizes up how much of starchy carbohydrates, protein, dairy, fruit, vegetables and oils are within the government advised calories for men (2,500) and women (2,000). 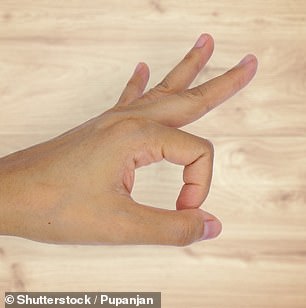 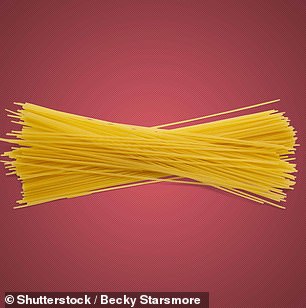 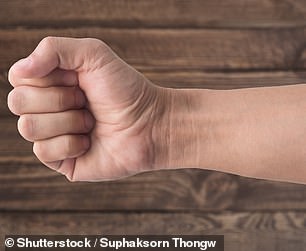 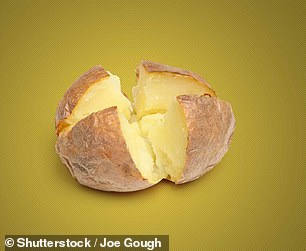 Using our hands to measure food would lead us to ‘eat less’, as well as to ‘eat differently’, the Find Your Balance guide said.

The suggested single portion of grilled chicken breast or a cooked salmon fillet or a cooked steak is ‘about half the size of your hand’.

HOW CAN YOU USE YOUR HANDS TO MEASURE FOOD?

The British Nutrition Foundation suggests practical measures using your hands and spoons to get an idea of sensible portion sizes.

A bunch of spaghetti the size of a £1 coin, measured using your finger and thumb (75g)

A baked potato about the size of your fist (220g)

About 3 handfuls of breakfast cereal (40g)

About 1 tablespoon of peanut butter (20g)

About 3 teaspoons of soft cheese (30g)

Cheese should be no more than ‘about the size of two thumbs together’ and uncooked pasta ‘two handfuls’.

The suggestions are in line with the government’s Eatwell Guide, which says our diet should be made up of one-third fruit and vegetables, one-third starchy carbohydrates and the rest divided between dairy and protein.

This would mean that every day, we are able to eat five or more servings of fruit and vegetables, three to four of starchy carbohydrates such as bread, rice or pasta (which should be wholegrain), and two to three portions each of protein and dairy.

The BNF looked at the data from the national diet and nutrition survey and found lots of variations in the sizes of portions.

Most of us throw in a rough estimate with pasta – but this could rack up almost double the calories needed.

They BNF found that the most commonly consumed size was 230g (324 calories), and 10 per cent of people were consuming 350g (500 calories), before sauces and other foods were added.

The guide suggests using the finger and thumb to measure a bunch the size of a £1 coin for spaghetti.

If you have bigger hands, you generally will get bigger portions, the guide said. If you are ‘tall or very active’ you may need to add a little more, and if you are trying to lose weight, you would remove a little. 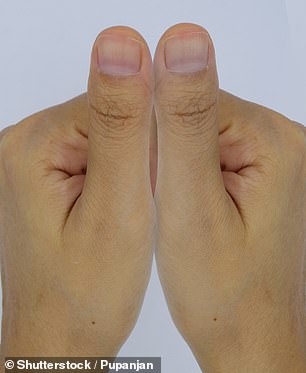 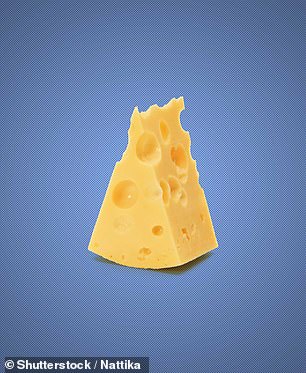 Cheese should be no more than ‘about the size of two thumbs together’, the guide says 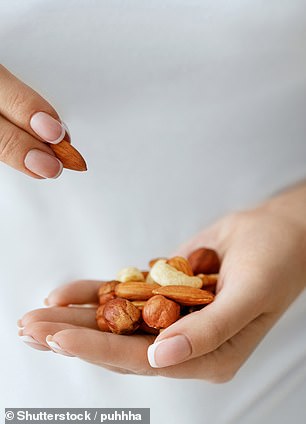 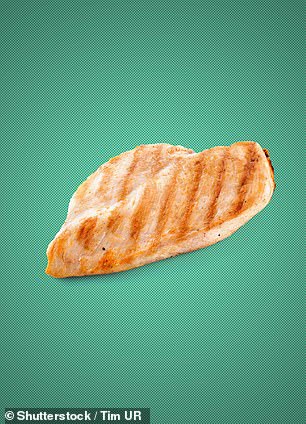 Half the size of a hand is approximately the correct amount of chicken, the guide says. A portion of nuts and seeds should be a handful

Many of the foods listed are already portioned, such as a tin of tuna or a bagel, or suggest using the packets guidelines.

Oils and spreads should be used in ‘small amounts’ in addition. The use of spoon measurements lays bare how many calories foods such as oils contain.

Olive oil or vegetable oil, which is easy to throw over food while cooking, is 99 calories per tablespoon, for example.

Drinks are also included, which many people are not aware contribute to daily calories.

They can be part of different food groups, for example, juices from fruit and vegetables, milk in dairy and alternatives.

A small glass (150ml) of fruit juice would contribute to your five-a-day and be within a sensible portion.

For each food group, it gives smaller portions for snacks and light meals, too.

For example, in the starchy carbohydrates group, a cooked baked potato, about 213 calories and the size of your first, would be for a main meal. Whereas plain popcorn, 94 calories and three handfuls, would be a suitable snack.

Other snacks include one handful (up to 137 calories) of unsalted nuts and seeds, and two tablespoons of reduced-fat hummus (103 calories).

An example of a day’s diet is drawn up by the BNF, with lunch consisting of a baked potato with tuna mayonnaise, a bowl of fruit salad, and two tangerines. 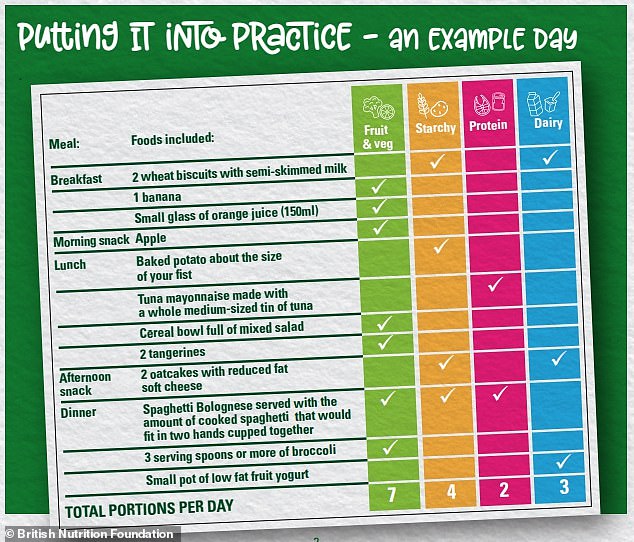 The BNF suggestions are in line with the government’s Eatwell Guide, which says our diet should be made up of one-third fruit and vegetables, one-third starchy carbohydrates and the rest divided between dairy and protein. A day’s food is drawn up as an example

Official figures have suggested that Brits are underestimating their calorie intake by 50 per cent.

Men typically have 1,000 more calories every day than they account for, while women consumed about 800 more than they estimate.

Experts at the Office for National Statistics have suggested that people do not like to ‘be taken for slobs’ and so end up lying to themselves about how much they actually eat.

Tackling this could help reduce obesity, which currently is estimated to affect around 25 per cent of adults and around 20 per cent of children aged 10 to 11.

The NHS has become more under pressure in course – in one year, there was an 18 per cent increase in hospital admissions either for obesity treatment or conditions caused or complicated by obesity, figures from April 2018 show.

HOW IS THE GOVERNMENT IS TRYING TO STOP OBESITY?

Proposed plans to restrict the number of calories in pizzas, pies and ready meals were last year revealed as part of drastic Government moves to try and cut down on obesity.

A tax on added sugar in drinks came into force in April, requiring companies to hand over more of the money they make from drinks which contain more than 5g of sugar per 100ml of liquid.

As a result, many soft drinks have had their recipes changed in order to avoid paying the tax and putting prices up. Sugary drinks are the biggest single source of sugar for children and teenagers.

The Government is also considering making it compulsory for all restaurants and fast food outlets to display the number of calories in each meal on their menu.

Some food outlets already do this but there can be unexpected numbers of calories in popular dishes, and the Government is consulting on the plans before a decision is due in spring.

In March this year, Public Health England warned Brits to crack down on the number of calories they’re eating, advising people to consume no more than 1,600 per day.

The watchdog says adults shouldn’t eat any more than 400 calories for breakfast, 600 for lunch and 600 for dinner – this would allow for some snacks, experts said.

Examples of 600-calorie meals include a tuna pasta salad and a small cereal bar, a chicken salad sandwich and a pack of crisps, or half a pepperoni pizza with a quarter of a garlic baguette and a banana.