Home » Health News » NFL players age faster than the rest of us. Harvard is researching what can be done 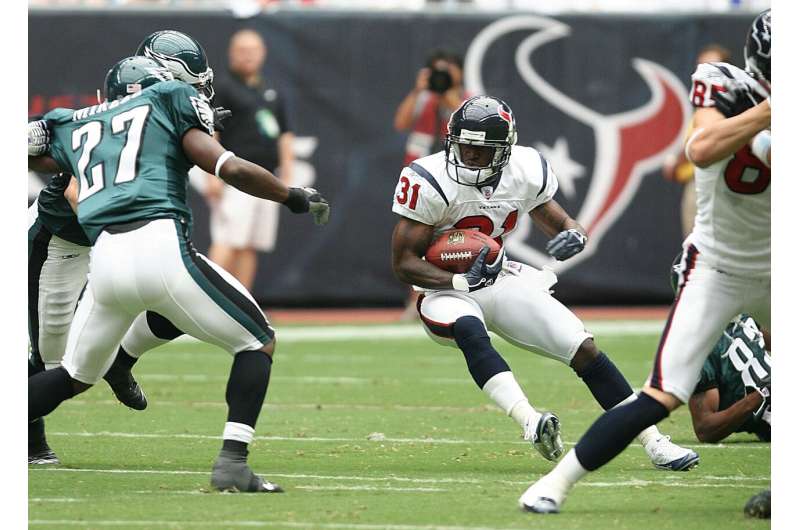 NFL players age nearly a decade faster than the general population and suffer from arthritis and high blood pressure as early as their 20s, according to a new study from Harvard Medical School.

The study, published Thursday, was spurred by retired players’ reports of faster aging and clinicians “saying these players looked older than their chronological age when they came in for testing,” said Rachel Grashow, director of epidemiological research initiatives with the Football Players Health Study at Harvard University.

Researchers compared survey results from 4,000 living former players with similar questions asked of the general public in government surveys. Players were matched with people of the same age, race and body mass index, and their results were compared.

Grashow’s conclusion: “They’re almost 10 years ahead of the general population.”

That makes sense to Julius Thomas, 34, whose career as a tight end started in 2011 with the Denver Broncos and ended in 2017 with the Miami Dolphins.

“We’ve put our bodies through a lot playing this game,” he told U.S. TODAY.

Thomas, now a doctoral student studying health psychology, has had five surgeries on his knees, ankle and hand. “You have a couple of surgeries, you feel a little bit older, that’s for sure,” he said. “You can definitely tell when you’ve been under the knife.”

Thomas said he hopes studies like this will spur former players to learn what they can do to reduce the risk of more physical problems as they age.

“Studies like this help paint a picture,” he said. “It gives us an opportunity: what can we do more for players? Educating them, and how can we provide services or opportunities for them to mitigate what could potentially be coming down the line?”

More than 20% of NFL retirees are diagnosed with arthritis in their mid-to-late 20s, compared to 5% of similar men, according to the study. In their 40s, 47% of former players have the condition, compared to 19% of others. The gap then begins to close.

“Arthritis—whatever your age, however you acquire it—comes with a lot of other conditions. It comes with chronic pain, prescription pain medication usage, it comes with sedentary behavior, it comes with limited mobility,” Grashow said.

Depression is closely associated with chronic pain and medications, she added.

Linemen, who tend to be bigger and take more hits than other players, have even shorter periods of good health and age faster than their peers, the study showed.

“Linemen are always hitting somebody,” said Ed Reynolds, 61, a linebacker for the New England Patriots and New York Giants between 1983 and 1992. “You’re the start of the snap or you’re on the other side of where the snap started. They’re always colliding with each other.”

Like others in the study, Reynolds developed arthritis early, which he also attributes to his time in the military.

Although this disparity later reverses, the damage from early hypertension might cause long-term harm to cardiovascular health, Grashow said.

Now, young former players aren’t often treated for high blood pressure because of their age, but Grashow thinks early treatment could help improve cardiovascular and brain health decades later and relieve some of the worry that they might develop memory and other cognitive problems later in life.

Both Thomas and Reynolds, members of the Harvard research advisory board, said they hope the study will help former players become more proactive about their health—getting enough exercise and sleep, eating well, reducing stress.

Some guys leave the field and end up spending even more time in the weight room, while others train less than they did before. But it’s definitely a different scenario, Thomas said, when “nobody’s telling you you’re going to get fined if you don’t” work out.

When he left football, Reynolds said, his medical care changed dramatically. Before, his doctor had been the team doctor who was constantly available. But later, he had to find his own primary care doctor and make an effort to get seen.

Reynolds, whose oldest son, Ed II also played in the NFL, likes the idea that the research will help former players understand how to get better care for themselves.

Play in his day was safer in some ways than it is today, said Reynolds, who made $39,500 his first year with the Patriots.

He was in the NFL for four years before he was allowed to become a starter. He would get called in when an older player was worn out, giving the older guy a break and him a short exposure to the field. “By the time you got to the starting position, you weren’t as beat up,” Reynolds said. “Nowadays, as soon as you come in, you’re starting right away.”

Other things have changed for the better, he said.

When he was in high school, Reynolds said he ran on asphalt or cinder, not the proper tracks available today. Helmets and shoulder pads have also improved substantially, as has the training, “teaching you not to lead with your head,” he said. All that is making a difference for players’ physical well being, he said. “I believe strongly that it is.”

Thomas thinks football gets a bad rap for being dangerous. Other sports played at such a high level are hard on the body, too, he said, but because football has been better studied, it gets all the attention.

“This is the first one being investigated,” he said. “There’s still a lot that’s untold.”

Still, Reynolds said, the cost to his body was well worth it.

“For all that people perceive negative effects, there’s so much more positive,” he said. “I consider myself blessed.”

Cancer symptoms: Five ‘unexpected’ signs of cancer you may be ignoring