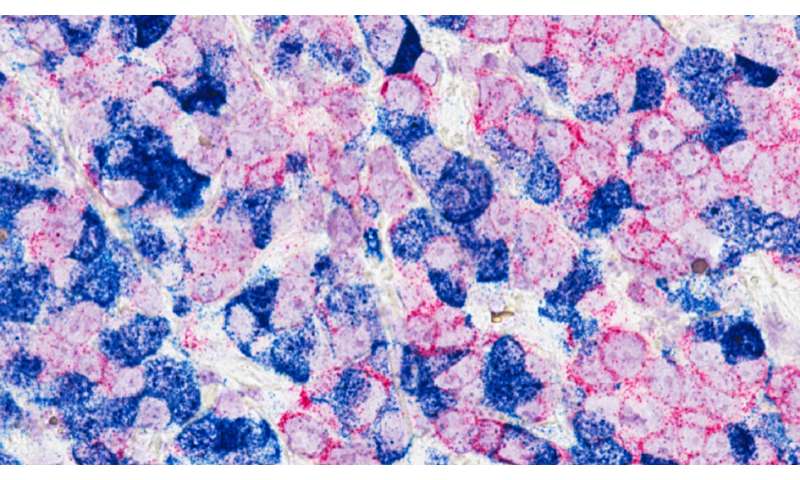 Patients with metastatic breast cancer carrying a particular mutation fare better on one form of hormone therapy than another and can be identified using a blood test, according to a new study.

In a combined analysis of two major Phase III clinical trials, called SoFEA and EFECT, researchers were able to show that patients with advanced hormone-receptor positive breast cancer, which has developed a mutation in its androgen receptors called ESR1, fared better on a hormone therapy drug called fulvestrant, compared with another called exemestane.

The researchers, from The Institute of Cancer Research, London, and The Royal Marsden NHS Foundation Trust, analyzed two trials which randomized patients with hormone receptor-positive metastatic breast cancer—whose cancer had got worse on aromatase inhibitor therapy—between treatment with fulvestrant or exemestane.

The research was published in Clinical Cancer Research and funded by Le Cure, Breast Cancer Now, and AstraZeneca.

In this work, the scientists were able to use a ‘liquid biopsy’ to determine whether a patient’s cancer had developed the ESR1 mutation or not, and found the mutation was present in 30% of samples taken at the start of the trial.

Tumors shed small amounts of DNA which can be analyzed by taking a blood sample from a patient, without the need for an invasive, old-fashioned biopsy. The liquid biopsies are very sensitive and can detect tiny amounts of tumor DNA in the blood.

In fact, ESR1 mutations are not easy to detect with standard biopsies, since the mutation develops in response to aromatase inhibitor treatment. Biopsies are generally taken before treatment begins, and therefore mutations and changes in the cancer can be missed as biopsies are rarely taken after this.

Patients with hormone-receptor positive breast cancers are treated in the first instance with a type of drug known as an aromatase inhibitor. Hormone-receptor positive breast cancers are so-called because the cancer cells have receptors for the hormones progesterone or estrogen. Molecules of estrogen fit these receptors like a lock and key, feeding the cancer and helping it grow.

Aromatase inhibitors work by blocking the production of estrogen in the body, meaning the hormone receptors in the cancer cells are starved of their food of choice.

One way in which the cancer can adapt and evolve to overcome this scenario is by developing a mutation in their estrogen receptor (also called ESR1). This mutation mimics the effects of estrogen binding to the receptor, allowing the cancer to grow even in the absence of estrogen. In this way, the cancer develops resistance to aromatase inhibitor therapy.

For some patients, once resistance like this develops to initial aromatase inhibitor therapy, the next port of call is a drug called exemestane, which also blocks the production of estrogen in the body.

Fulvestrant is another type of drug used after initial resistance develops, but it works in a different way to aromatase inhibitors. Rather than interfering with the production of estrogen, it affects the mutated hormone receptors on the cancer cells directly, by binding onto them and tricking the cell into pushing a pre-programmed self-destruct button.

Professor Nicholas Turner, Professor of Molecular Oncology at the ICR and Head of the Ralph Lauren Center for Breast Cancer Research at The Royal Marsden, hopes this work will go on to inform best practice for patients with advanced breast cancer being treated on the NHS. He said:

Back pain treatment: Trigger point myotherapy can relax tight muscles – what is it?