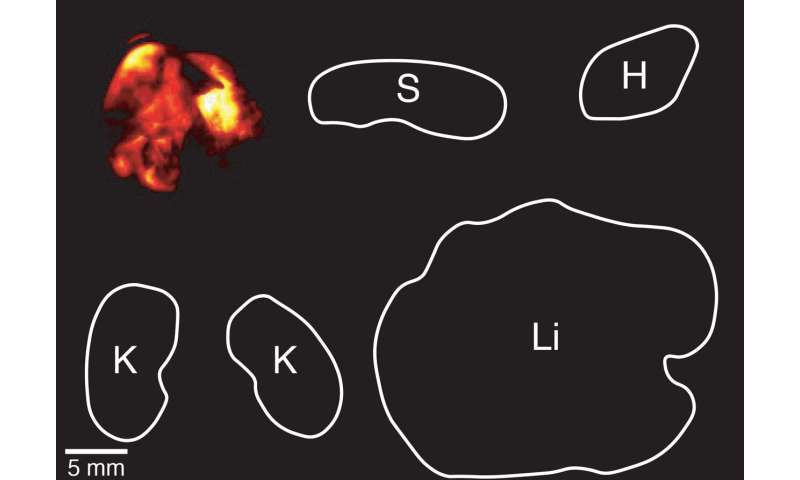 People who are at high risk of developing lung cancer, such as heavy smokers, are routinely screened with computed tomography (CT), which can detect tumors in the lungs. However, this test has an extremely high rate of false positives, as it also picks up benign nodules in the lungs.

Researchers at MIT have now developed a new approach to early diagnosis of lung cancer: a urine test that can detect the presence of proteins linked to the disease. This kind of noninvasive test could reduce the number of false positives and help detect more tumors in the early stages of the disease.

Early detection is very important for lung cancer, as the five-year survival rates are at least six times higher in patients whose tumors are detected before they spread to distant locations in the body.

“If you look at the field of cancer diagnostics and therapeutics, there’s a renewed recognition of the importance of early cancer detection and prevention. We really need new technologies that are going to give us the capability to see cancer when we can intercept it and intervene early,” says Sangeeta Bhatia, who is the John and Dorothy Wilson Professor of Health Sciences and Technology and Electrical Engineering and Computer Science, and a member of MIT’s Koch Institute for Integrative Cancer Research and the Institute for Medical Engineering and Science.

Bhatia and her colleagues found that the new test, which is based on nanoparticles that can be injected or inhaled, could detect tumors as small as 2.8 cubic millimeters in mice.

Bhatia is the senior author of the study, which appears today in Science Translational Medicine. The paper’s lead authors are MIT and Harvard University graduate students Jesse Kirkpatrick and Ava Soleimany, and former MIT graduate student Andrew Warren, who is now an associate at Third Rock Ventures.

For several years, Bhatia’s lab has been developing nanoparticles that can detect cancer by interacting with enzymes called proteases. These enzymes help tumor cells to escape their original locations by cutting through proteins of the extracellular matrix.

To find those proteins, Bhatia created nanoparticles coated with peptides (short protein fragments) that are targeted by cancer-linked proteases. The particles accumulate at tumor sites, where the peptides are cleaved, releasing biomarkers that can then be detected in a urine sample.

Her lab has previously developed sensors for colon and ovarian cancer, and in their new study, the researchers wanted to apply the technology to lung cancer, which kills about 150,000 people in the United States every year. People who receive a CT screen and get a positive result often undergo a biopsy or other invasive test to search for lung cancer. In some cases, this procedure can cause complications, so a noninvasive follow-up test could be useful to determine which patients actually need a biopsy, Bhatia says.

“The CT scan is a good tool that can see a lot of things,” she says. “The problem with it is that 95 percent of what it finds is not cancer, and right now you have to biopsy too many patients who test positive.”

To customize their sensors for lung cancer, the researchers analyzed a database of cancer-related genes called the Cancer Genome Atlas and identified proteases that are abundant in lung cancer. They created a panel of 14 peptide-coated nanoparticles that could interact with these enzymes.

The researchers then tested the sensors in two different mouse models of cancer, both of which are engineered with genetic mutations that lead them to naturally develop lung tumors. To help prevent background noise that could come from other organs or the bloodstream, the researchers injected the particles directly into the airway.

Using these sensors, the researchers performed their diagnostic test at three time points: 5 weeks, 7.5 weeks, and 10.5 weeks after tumor growth began. To make the diagnoses more accurate, they used machine learning to train an algorithm to distinguish between data from mice that had tumors and mice that did not.

With this approach, the researchers found that they could accurately detect tumors in one of the mouse models as early as 7.5 weeks, when the tumors were only 2.8 cubic millimeters, on average. In the other strain of mice, tumors could be detected at 5 weeks. The sensors’ success rate was also comparable to or better than the success rate of CT scans performed at the same time points.

The researchers also found that the sensors have another important ability—they can distinguish between early-stage cancer and noncancerous inflammation of the lungs. Lung inflammation, common in people who smoke, is one of the reasons that CT scans produce so many false positives.

Bhatia envisions that the nanoparticle sensors could be used as a noninvasive diagnostic for people who get a positive result on a screening test, potentially eliminating the need for a biopsy. For use in humans, her team is working on a form of the particles that could be inhaled as a dry powder or through a nebulizer. Another possible application is using these sensors to monitor how well lung tumors respond to treatment, such as drugs or immunotherapies.

“A great next step would be to take this into patients who have known cancer, and are being treated, to see if they’re on the right medicine,” Bhatia says.

Coronavirus and sex: Can I have sex?

Counties with more trees and shrubs spend less on Medicare