Mother, 47, is left with lumps the size of GRAPEFRUITS on her stomach ‘after a botched tummy tuck in Turkey’

A mother who had a tummy tuck in Turkey was left distraught when she developed grapefruit-sized swellings on her stomach after the operation.

Deb Thompson, 47, paid £4,000 to have a breast enlargement and the saggy skin on her stomach tidied up after losing a 1st 8lbs (10kg) in just three months last year.

But when she arrived home from the hospital in Turkey she discovered she had a W-shaped scar on her abdomen and two unsightly lumps of fluid.

Angry that she hadn’t done more research and was left feeling no better about the way she looked, Ms Thompson will now have corrective surgery in the UK and got €1,800 (£1,613) in compensation from the Turkish clinic.

Deb Thompson (pictured left before her surgery) was still unhappy with her body after losing weight. She had a tummy tuck and breast enlargement in Turkey and, while happy with the boob job, she said the surgeons ruined her stomach (right)

‘I was forced to wear baggy tops to cover the lumps,’ Ms Thompson said. ‘I felt even more conscious than before I lost the weight.

‘My mental health took a nose dive. I wanted to hide away and became isolated.

‘I couldn’t work and my confidence was affected. I even felt suicidal. My stomach felt like a water bed.’

Ms Thompson, from Liverpool, borrowed the money from a friend for the two procedures in March this year.

She had lost 1st 8lbs between September and December 2018 after deciding she was unhappy with her weight as a size 14 – 11st 2lbs at 5ft 6ins tall.

Clean eating and hard work in the gym helped her lose the weight but the skin on her stomach had lost its elasticity and stayed loose and saggy afterwards.

‘I felt like a wrinkly elephant,’ she said. ‘It made me very self-conscious. I dreamed of wearing a bikini, but knew that I never could until I’d fixed my saggy stomach.’

After researching companies offering cosmetic surgery in Turkey for a fraction of the cost of getting the work done in the UK, Ms Thompson settled on one she liked the look of.

She flew to Istanbul six months ago and had five hours of surgery to make her breasts bigger and remove the excess skin from her torso.

But when she woke up in agony and noticed two lumps where the operation had been done, she decided something was wrong.

‘According to the surgeon it went well,’ she said. ‘I was in pain for the first few days after, but they told me that was normal.

‘When my dressings were removed four days later, I was horrified. I’d been left with a W-shaped scar on my stomach.

‘I had hoped that I’d be left with a neat scar that was discreet. The swelling was worse than normal, it looked like I had two grapefruits in my stomach. I was shocked.

‘My surgeon told me the swelling would go down and that I’d see the final results in six to 12 months.’ 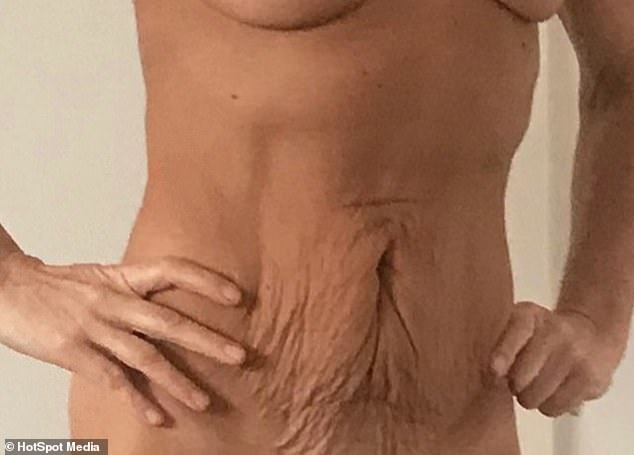 Ms Thompson lost 1st 8lbs last year after deciding she wasn’t happy with her weight, but said shedding the flab left her with ‘wrinkly elephant skin’ 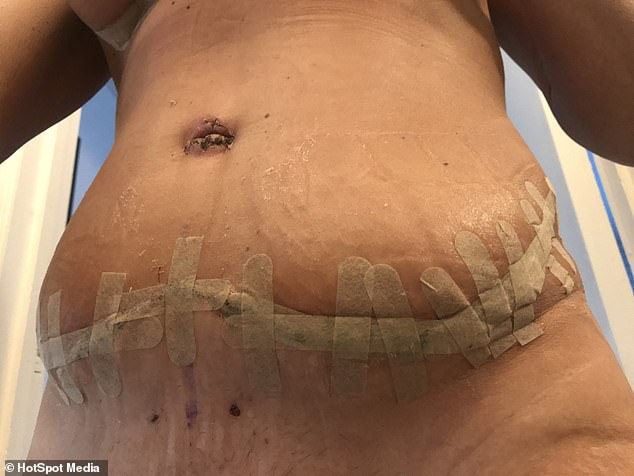 After her tummy tuck in March, Ms Thompson woke up to find she had been left with a huge W-shaped scar and grapefruit-sized swellings in her abdomen 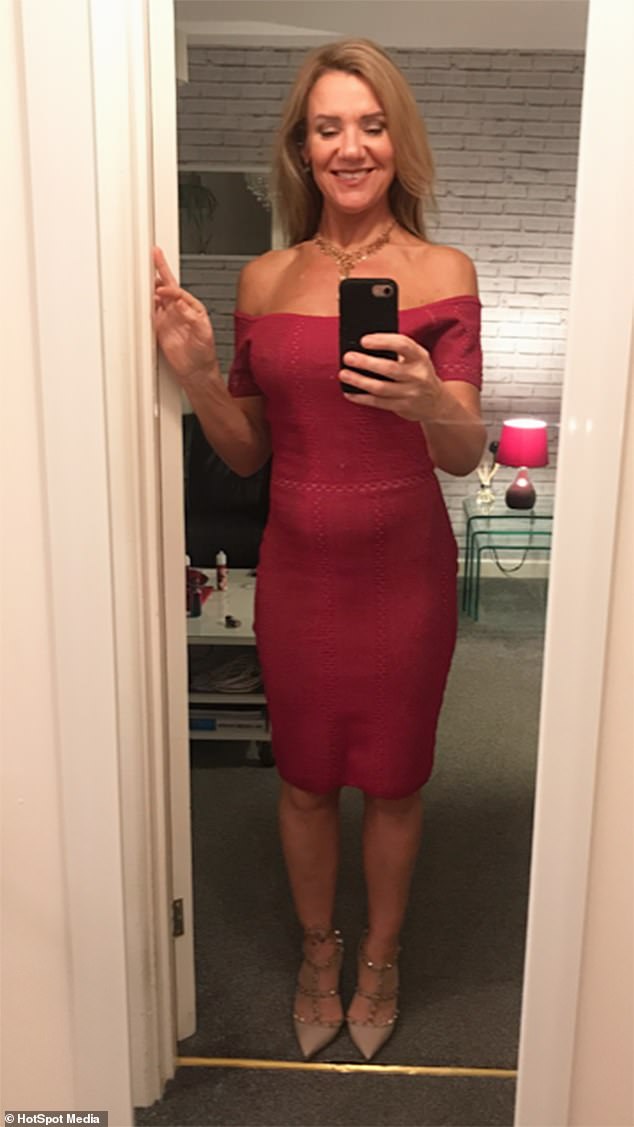 Ms Thompson, pictured after her operation, is now arranging to have corrective surgery at home in the UK and has claimed back €1,800 (£1,613) from her surgeon in Turkey

Back home, Ms Thompson said, a doctor told her the lumps were seromas – a seroma is a build-up of fluid beneath the skin.

The lumps develop where tissue has been removed from the body during surgery and they are usually reabsorbed by the body within a month or so, though some may take longer.

They are usually harmless and do not need special treatment – the fluid leaks out of glands in the immune system which are damaged during an operation.

Seromas are a relatively common complication of breast cancer surgery, in which tissues near the lymph nodes in the armpit is removed.

In April – the month after her surgery – Ms Thompson’s doctor advised her to wait for the seromas to disappear on their own.

‘I didn’t want to wait, so my friend, who is a nurse, helped me drain it,’ Ms Thompson said. 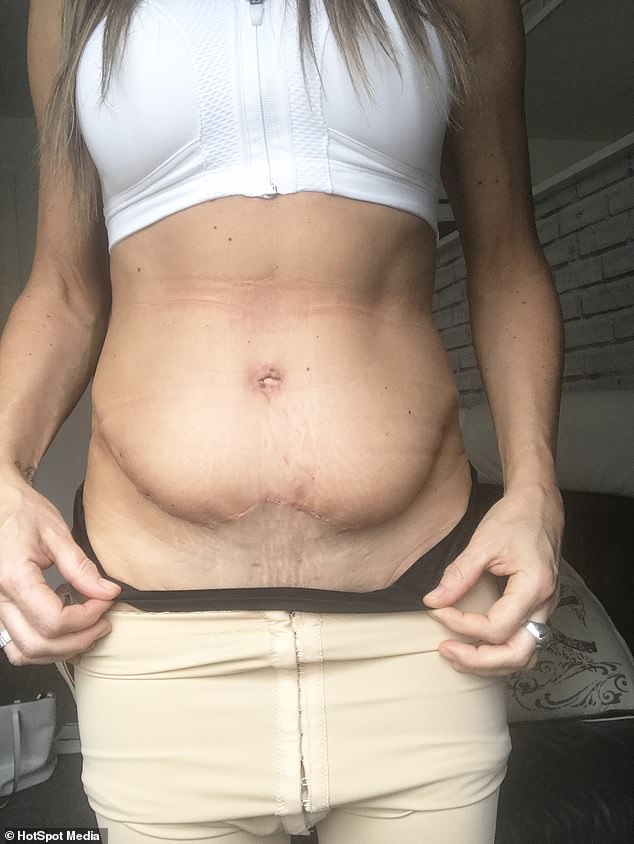 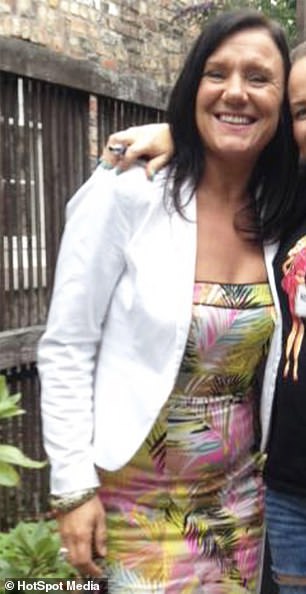 Ms Thompson, pictured before her weight loss in 2016, said her mental health was devastated by the experience

’42ml of liquid came out of my stomach. It was gross. I complained to my surgeon who said that it was too early for me to see the final results.’

She threatened the surgeon in Turkey with legal action and, five months later, received more than a third of her money back.

‘It was still small change compared to the mental anguish I’ve been through,’ she said.

‘I wished I’d never had the surgery done. I wanted to feel more confident about myself, instead I was left feeling miserable.

‘I just want my body fixed, I don’t want to live looking like this. I certainly shouldn’t have had two procedures done at the same time.

‘I’ve been single for 10 years and couldn’t even imagine showing my stomach to a man right now.’

Ms Thompson has now booked in to have corrective surgery in the UK and wants to warn women about travelling abroad for plastic surgery.

‘Always research your surgeon and not just the company,’ she said. ‘Look at their before and after pictures too.

‘And speak to women who have had the procedure, I’ll always regret not doing that.’

WHAT IS A TUMMY TUCK?

Known medically as an abdominoplasty, tummy tucks improve the appearance of the stomach.

Surgeons remove excess skin and fat from the abdomen, and tighten connective tissues.

The end result is a more toned look. Many women, and men, have the operation to boost their body image.

A tummy tuck is also the go-to option for women who have given birth and have a prolonged ‘mummy tummy’.

The surgery repairs the rectus diastasis – two abdominal muscles than can separate during pregnancy.

Figures show nearly 130,000 tummy tucks were performed in the US last year. There are nearly 3,000 performed privately in the UK each year.

The Mayo Clinic states: ‘Like any other type of major surgery, a tummy tuck poses a risk of bleeding, infection and an adverse reaction to anesthesia.’

It can also cause fluid to build-up beneath the skin, known as a seroma. They can become infected.

Experts teaming up to evaluate protocol for reuse of N95 masks

When will gyms reopen in the UK?