Listeria is a deadly bacteria that can be found in food.

Three people has died after contracting the bacteria from meat.

Public Health England (PHE) said sandwiches and salads linked to the cases have been withdrawn and the supplier, The Good Food Chain, has voluntarily ceased production while the investigation continues.

Listeria OUTBREAK: Three deaths in UK news – what is it? Symptoms of fatal bacteria

The cases of listeria infection were in six seriously-ill hospital patients in England, three of whom died.

Dr Nick Phin, deputy director at the National Infection Service at PHE, said: “Our thoughts are with the families of those patients who have died.

“We, along with the FSA, colleagues in local authorities and the NHS, have worked quickly to determine the likely cause of this outbreak and taken action to reduce the risk to the public’s health.

“To date, there have been no associated cases identified outside healthcare organisations and any risk to the public is low.”

Dr Colin Sullivan, chief operating officer at the Food Standards Agency, said: “Our sympathies are with the families of those patients who have tragically passed away. 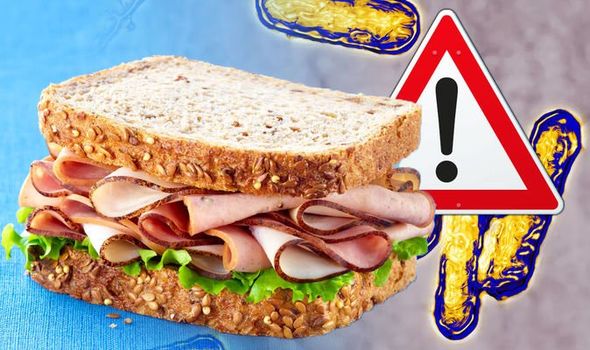 “We have taken action along with local authorities to minimise the risk based on the evidence so far.

“The FSA will continue to investigate how the outbreak occurred and if further steps are required to protect vulnerable groups.”

What is listeria monocytogenes?

Listeria monocytogenes is a bacteria which causes illness.

The infection can become serious, and the elderly, children and pregnant woman should be especially careful about avoiding it.

Sometimes the infection can also affect the nervous system, which causes headaches, confusion, stiff neck, tremors and convulsions, and a loss of balance.

Bed bug bites: Look out for this pattern on your skin – you could have an infestation