Home » Health News » Like Bruce Willis, I have aphasia – it takes over your life 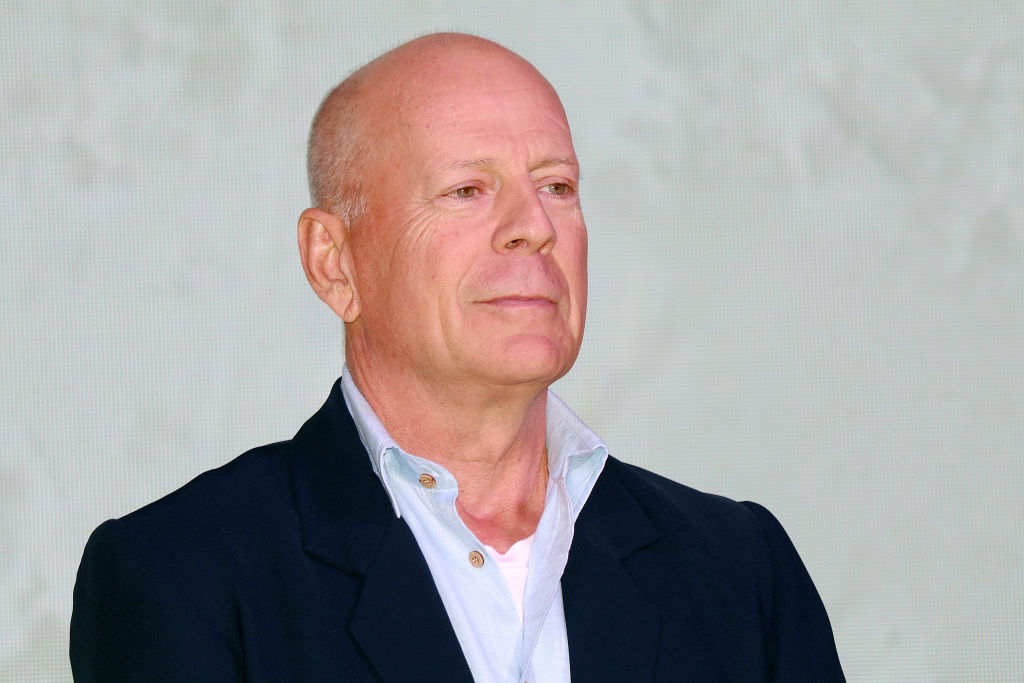 I was 36 years old when it happened.

I was otherwise healthy but one day in February 2017, I developed a sudden headache.

Two days passed and I went to the doctor. The GP said to keep monitoring it and come back in a week.

Five days later, my partner Jo took the kids to stay with her parents because I still had the headache and I wanted some peace and quiet.

I had a severe stroke the next morning.

I couldn’t move, speak or do anything. I also noticed the right side of my face was drooping and when I tried to get up, I fell over.

I think my partner was away for 24 hours after my stroke but I don’t know because it’s all a little blurry.

I can picture it.

Jo opened the front door of our house and I was in the upstairs bedroom lying down on the floor. ‘George,’ she called.

I couldn’t get any words out but I was very comforted because I knew Jo would call the hospital and take care of me.

Jo cried ‘oh no’ when she saw me and she knew I’d had a stroke because of my face.

The ambulance came and I was relaxed by the notion that I wasn’t going to die today.

The stroke was caused by the neck blood vessel collapsing and stopping the oxygen getting to my brain.

While in the Intensive Care Unit, I didn’t understand what the problem was or what people were saying. I also couldn’t speak.

After the doctor asked me to write my name and I couldn’t, that’s when my partner was told I now had a language disorder called aphasia.

Doctors didn’t know how long it would last because some people recover quickly in the first few weeks, but I didn’t.

I couldn’t speak for two months so I had to have speech therapy.

I was in hospital for six months and I was having treatment for walking again, getting my arm moving again and balance.

It was hard. The fatigue is overpowering.

I used to cycle and run for fun and now, it is very hard to do 30 minutes of physio.

While the fatigue gets less, it doesn’t go, ever.

I can walk again, with a slight limp today. My right hand doesn’t move well.

I can clasp, but I can’t release and my whole arm is weak. But it’s the aphasia that is terrible.

But it’s getting better, but slowly.

Going home from hospital was fantastic.

I could walk very short distances with a walking stick and my improvement with aphasia after the stroke had increased.

I had a NHS physio for 12 hours and that’s it. I had NHS speech therapy twice a week (with homework every day!) and once a week after six months.

The end of my speech therapy was one year after I had started it.

My partner is fantastic.

She is supporting me with life’s admin – helping me get my point across and she is so patient.

A year after my stroke, I went back to work as a corporate PR and the founder of my company was very good to me.

He was unswervingly patient and the recovery from aphasia is very long.

Unfortunately, nine months after starting work again, I realised I could no longer do my job so I had to medically retire.

So the moment I found out that Bruce Willis was retiring from acting due to aphasia, I felt immensely sorry for him, his wife, kids and friends.

I know exactly what he must be feeling right now.

In a statement posted to his daughter Rumer’s Instagram, it was revealed: ‘Our beloved Bruce has been experiencing some health issues and has recently been diagnosed with aphasia, which is impacting his cognitive abilities.’

‘As a result of this and with much consideration Bruce is stepping away from the career that has meant so much to him,’ the statement added.

Today, I am a stay-at-home dad and I’d give the world for my kids and partner.

Thanks to physio and upper limb workouts that I still do I can play, tidy up and take my children to school.

Jo was really supportive and it’s been tough on her dealing with the kids and having a partner who had a stroke.

Since my aphasia diagnosis, I discovered that aphasia groups like Aphasia Re-Connect and iCafe that helps me to speak freely and have some time.

The people in these groups have first-hand knowledge of stroke and aphasia and I love it, talking with another aphasia sufferers, making friends.

I’m also volunteering for a disability charity called Wheels for Well-being, which supports disabled people to enjoy cycling. Many people aren’t aware of the fact that disabled people can cycle, but there are infrastructure, steep costs and facilities barriers.

My friends clubbed together and got a trike for me (two wheels on the front and one at the back) and I really enjoy using it.

Before the stroke, I was into road cycling and did all kinds of cycling events in different countries.

According to the Stroke Association, about 1.1million people in the UK are recovering from a stroke and about a third of those suffer from aphasia.

Aphasia is a serious condition and I don’t exactly know why the stroke happened to me.

I have bad days, but my partner and my friends have been supportive which is admirable.

I say this to Bruce Willis: Keep going.

Recovery can take a long time, but set yourself goals. Surround yourself with patient and positive people and hopefully you will get there.

I’m positive about my future.

Vitamin B12 deficiency symptoms: Does your tongue look different? Changes in your mouth

Bone marrow transplant: What is the impact of chemotherapy on the brain?