Could YOU handle the pressure of working in a busy A&E department? Play the nerve-racking game which tests how well you can juggle life-or-death scenarios in an NHS hospital

A nerve-racking game has given an insight into a day in the life of staff working in a busy NHS accident and emergency department.

The interactive role-play game Crisis Point: A Day in A&E lets people take on the roles of different staff in the hospital and react to common scenarios.

As you progress through the day, patients begin to build up in the waiting room, the hospital’s crisis level rises and the clock runs down as you try to clear your workload.

Created with the help of working NHS staff, the game aims to give people an insight into the difficult decisions and juggling acts health workers face every day and night.

It comes at a time when A&E departments across England are becoming more clogged up than ever and leaving thousands of patients facing long waits to be treated.

Crisis Point: A Day in A&E is a game based on a series of situations in which you make the decisions of a senior sister, staff nurse, senior charge nurse, junior doctor or consultant.

In one scenario, you have to decide whether or not to order a CT scan for a man in his 20s who had a bleeding head injury and says he feels dizzy and has vomited.

If you order the scan you may be using up extra resources for something which turns out to be minor, or you could spend more time monitoring his symptoms, meaning he could take up a bed in the emergency department until he feels better.

Each decision you make increases or relieves pressure on the hospital and, at the end of each section, you are given a crisis rating based on the NHS’s own OPEL system, which ranges from level zero to level three.

The aim is to make it to the end of the working day with the lowest crisis rating you can manage – L0 means the department is operating within Government targets, while L3, a critical rating, means patient safety is in danger.

Medical negligence solicitors Bolt Burdon Kemp created the game to highlight pressure on the NHS as recent figures show A&E departments are bursting at the seams across the country.

Figures analysed by the Health Service Journal this week revealed 74 out of 132 hospital trusts in England have worse A&E waiting times than they did in 2017. 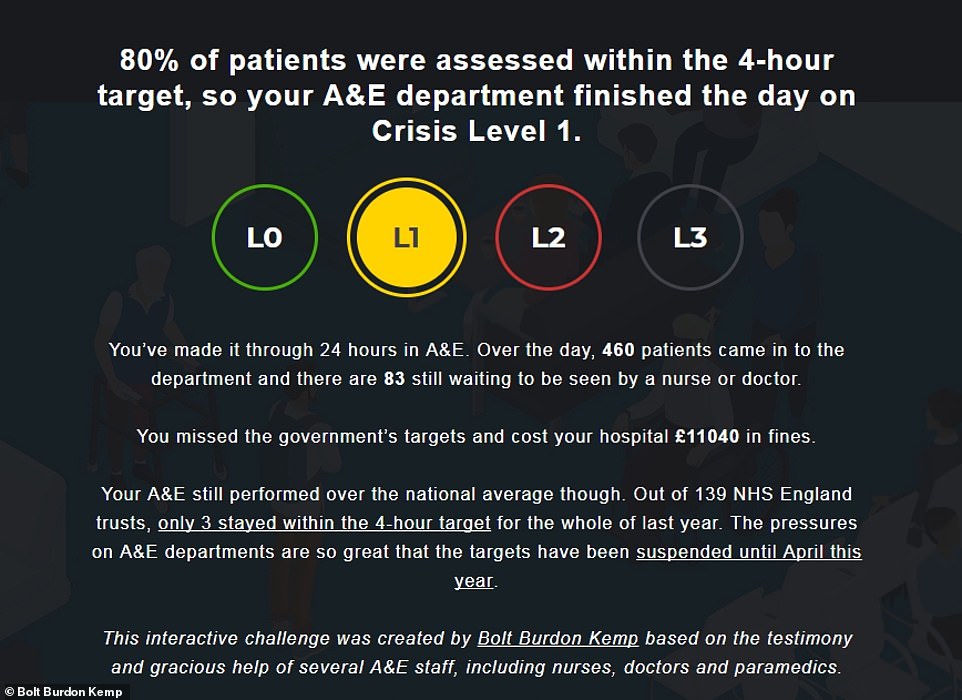 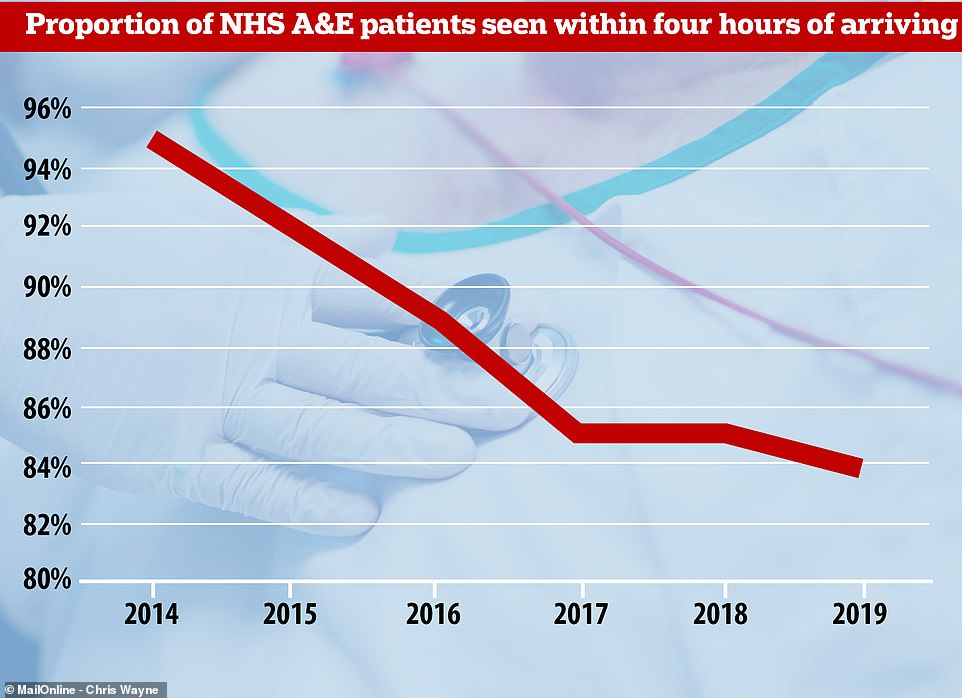 And the NHS is now believed to be scrapping its target of seeing 95 per cent of A&E patients within four hours later this year – the benchmark hasn’t been met on a national level since July 2015 and is now ‘suspended’ because hospitals can’t meet the standard.

The number of patients turning up to A&E departments is rising because of an ageing population and more complex illnesses – over the last five years, patient numbers in A&Es have risen 7.3 per cent, which equates to almost 3,000 extra people every day

The Crisis Point game is based on first-hand accounts from current NHS staff who revealed how they must juggle personalised care with staying emotionally detached enough to be efficient.

One nurse involved in the production said: ‘If you start to lose sight of the people we’re trying to help – if you see them as a number, you’re seeing them as an inconvenience.

At the end of the game you are given a final crisis rating for your 24-hour stint, and told how many patients you managed to treat and how many were left waiting.

The game, which takes around 15 minutes to complete, also reveals how much your management failures cost the hospital in performance fines.

Hospitals are charged more than £100 each time a patient isn’t seen within four hours, something which costs the NHS more than £600million per year.

Play the Crisis Point game online by clicking this link.

Scrapping the four-hour A&E target would have a ‘near-catastrophic impact’ on patient safety, doctors have warned.

The Government has said it plans to ditch the target for 95 per cent of patients to be seen at A&E within four hours.

Instead, those with less serious illnesses could have to wait longer, while new, more urgent, targets may be brought in for conditions such as heart attacks and stroke.

Royal College of Nursing lead for acute and emergency care, Anna Crossley said: ‘Axing [the target] or loosening it without evaluating alternatives puts patient safety at risk and sends a terrible signal that waiting times do not matter.

‘In fact what matters most right now is that we guarantee the safety of our patients by committing to their health and the four-hour target.’

Dr Taj Hassan, the president of the Royal College of Emergency Medicine said: ‘In our expert opinion, scrapping the four-hour target will have a near-catastrophic impact on patient safety in many emergency departments that are already struggling to deliver safe patient care in a wider system that is failing badly.’