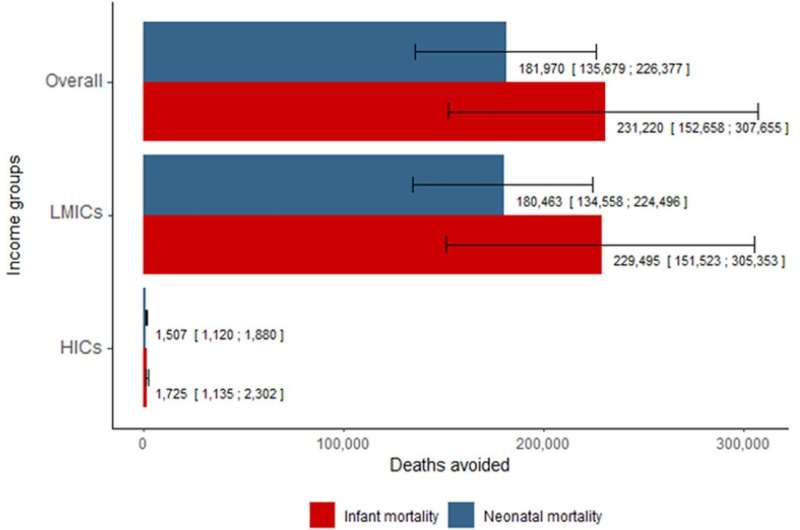 The first global analysis of its kind estimates that if every country’s cigarette taxes had met the World Health Organization’s recommendations, around 182,000 newborn deaths could have been averted in 2018.

Tobacco use can have direct and indirect effects on children’s health. For example, smoking during pregnancy can cause premature birth and exposure to second-hand smoke can cause lung conditions like asthma.

In total, increased cigarette taxes could have averted around 231,000 deaths of children aged under a year old in 2018 (including roughly 182,000 newborns), according to research led by Imperial College London and Erasmus MC and published in PLOS Global Public Health.

Almost all of these averted deaths would be in low- and middle-income countries (LMICs). The researchers say that increasing tobacco taxes in LMICs is vital as this on average is where the lowest levels of tobacco tax are and where the biggest opportunities for child health improvements exist.

The WHO recommends that tax represents more than 75% of the retail price of tobacco products, but in 2018 only 14% of the world’s population lived in countries which had achieved this.

Co-lead author of the study Dr. Anthony Laverty, from Imperial’s School of Public Health, says: “Tobacco use has significant and varied ill-effects on children’s health. When babies are exposed to smoking while in the womb, or exposed to second-hand smoke in the home after birth, this can increase the risk of health problems early on, like premature birth and asthma. Equally, tobacco can cause significant health problems for parents who smoke, affecting their ability to earn a living and their family’s wealth, which can indirectly affect a child’s health. Strong global tobacco control is vital to counter all of these causes, and to reduce the hundreds of thousands of needless child deaths we estimate are associated with smoking.”

Senior study author, Dr. Filippos Filippidis, also from Imperial’s School of Public Health, says: “Raising tobacco taxes has been shown to be the most effective measure to reduce smoking, but most research is only in adults or high-income countries. Past studies from high-income countries have found that increasing tobacco taxes reduces preterm birth rates, asthma exacerbations and child deaths, but until now it was not clear if these findings can be applied to low- and middle-income countries where there is lower awareness of tobacco-related harm, and the influence of the tobacco industry is stronger and might suppress the positive effects of raising taxes.”

The new study assessed the link between cigarette taxes and neonatal and infant mortality in 159 LMICs and high-income countries (HICs). It used every country’s mortality and tobacco tax data from 2008-2018. The study does not look at specific causes of death associated with tobacco.

The researchers also analyzed the results based on the type of taxes used (overall, as well specific types of taxes, such as specific cigarette taxes, value added taxes and import duties). They note that their study did not look at overall prices of cigarettes, so it may overlook how tobacco companies often offset these taxes by lowering the cost of their products.

The researchers accounted for other related variables including gross domestic product, fertility rate, education and access to drinking water.

Worldwide between 2008-2018, the average neonatal and infant mortality rates overall were estimated to be 14.4 and 24.9 deaths per 1,000 live births, respectively. These rates were higher in LMICs than HICs—with 33 children aged under one (including 19 newborns) in every 1,000 dying each year in LMICs, compared to 6 under-ones (including 4 newborns) in every 1,000 in HICs.

The researchers estimate that a 10% increase in tobacco taxation (ie, increasing the overall retail price of cigarettes by 10%) would be linked to a 2.6% reduction in newborn deaths globally, and a 1.9% reduction in deaths of children aged under a year old.

This would equate to preventing around 78,000 deaths of children under one, including 64,000 newborn deaths, worldwide in 2018.

The researchers found that increases in all types of taxation were associated with benefits for child survival.

“Taxation can increase the retail cost of a packet of cigarettes, which might mean that people choose to quit smoking as the habit becomes more expensive,” says Dr. Laverty.

Dr. Marta Rado from the Erasmus MC Rotterdam who co-led the study says: “Ensuring that children grow up in a smoke-free environment should be a global health and human rights priority.”

The researchers note that their study only included data on cigarette taxes and not on other forms of tobacco, and relied on tax data from the best-selling cigarette brands from each country.

COVID-19: Ways you can protect your young child who can't get a vaccine

Victor Garber health: ‘I was nearly dead’ – Star on his ‘traumatic’ symptoms of diabetes