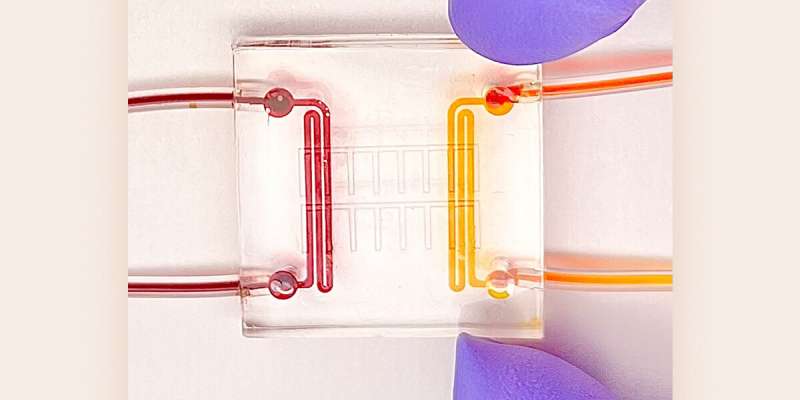 Researchers at the University of Southern California Alfred E. Mann Department of Biomedical Engineering have developed a “heart attack on a chip,” a device that could one day serve as a testbed to develop new heart drugs and even personalized medicines.

“Our device replicates some key features of a heart attack in a relatively simple and easy to use system,” said Megan McCain, an associate professor of biomedical engineering and stem cell biology and regenerative medicine, who developed the device with postdoctoral researcher Megan Rexius-Hall.

“This enables us to more clearly understand how the heart is changing after a heart attack. From there, we and others can develop and test drugs that will be most effective for limiting the further degradation of heart tissue that can occur after a heart attack,” added McCain.

McCain, a “cardiac tissue engineer,” whose work previously included co-developing a heart on a chip, and Rexius-Hall detail their findings in a recently released article in the journal Science Advances titled “A Myocardial Infarct Border-Zone-On-A-Chip Demonstrates Distinct Regulation of Cardiac Tissue Function by an Oxygen Gradient.”

Coronary heart disease is America’s No. 1 killer. In 2018, 360,900 Americans succumbed to it, making heart disease responsible for 12.6% of all deaths in the United States, according to the AHA. Severe coronary heart disease can cause a heart attack, which accounts for much of that pain and suffering. Heart attacks occur when fat, cholesterol and other substances in the coronary arteries severely reduce the flow of oxygen-rich blood to part of the heart. Between 2005 and 2014, an average of 805,000 Americans per year had heart attacks.

Even if a patient survives a heart attack, over time they can become increasingly fatigued, enervated and sick; some even die due to heart failure. That’s because heart cells don’t regenerate like other muscle cells. Instead, immune cells appear at the site of injury, some of which can be harmful. Additionally, scarring develops that weakens the heart and the amount of blood it can pump.

However, scientists don’t completely understand this process, especially how heart cells in the healthy and injured parts of the heart communicate with each other and how and why they change after a heart attack.

McCain and Rexius-Hall believe their heart attack on a chip can shed some light on those mysteries.

“Fundamentally, we want to have a model that can lead to a better understanding of heart attack injury,” Rexius-Hall said.

Heart attack on a chip

The heart attack on a chip is literally built from the ground up. At the base is a 22-millimeter-by-22-millimeter square microfluidic device slightly larger than a quarter—made from a rubber-like polymer called PDMS—with two channels on opposing sides through which gases flow. Above that sits a very thin layer of the same rubber material, which is permeable to oxygen. A micro layer of protein is then patterned on the top of the chip, “so that the heart cells align and form the same architecture that we have in our hearts,” McCain said. Finally, rodent heart cells are grown atop the protein.

To mimic a heart attack, gas with oxygen and gas without oxygen is released through each channel of the microfluidic device, “exposing our heart on a chip to an oxygen gradient, similar to what really happens in a heart attack,” McCain said.

Because the microfluidic device is small, clear, and easy to see on a microscope, McCain added, it also allows researchers to observe in real time functional changes that sometimes happen in the heart after an attack, including an arrythmia, or an irregular heartbeat, and contractile dysfunction, or decreases in the contraction strength of the heart. In the future, researchers can make the model more complex by adding immune cells or fibroblasts, the cells that generate the scar after a heart attack.

By contrast, researchers cannot watch changes to heart tissue in real time with animal models. Additionally, traditional cell culture models uniformly expose heart cells to high, medium or low levels of oxygen, but not a gradient. “That means they cannot mimic what really happens to damaged heart cells in the so-called border zone after a heart attack,” Rexius-Hall said.

McCain said, “It is very exciting and rewarding to envision our device having a positive impact on patient lives in the near future, especially for heart attacks, which are extremely prevalent.”

Vitamin B12 deficiency: Could your depression, anxiety and insomnia be caused by low level