Hawaii is set to be the only US state to still have an indoor mask mandate as governors nationwide drop Covid restrictions in the wake of Omicron figures plummeting: Daily infections drop 38% over past week

An analysis by CBS News finds that 49 U.S. states have either lifted or relaxed indoor mask mandates, or have set a date to do so in the near future. The lone holdout is Hawaii, the island state that has had the strictest mandates of anywhere in the country throughout the pandemic so far.

These decisions by both Democratic and Republican leaders around America come as cases decline basically everywhere. 49 states have recorded a decline in Covid cases over the past two weeks, with Maine being the lone outlier.

Nationwide, the United States is recording 79,668 cases per day – the first time the seven day average has dropped below 80,000 since November 29. Cases are down 38 percent over the past seven days, and down 90 percent from the Omicron fueled surge’s mid-January peak of around 800,000 per day.

Last week, California Gov Gavin Newsom announced Thursday that his state – the most populous in America- will soon transition into treating COVID-19 as an endemic, moving on from the pandemic as the state marks two years since the first cases of the virus were detected in the U.S. 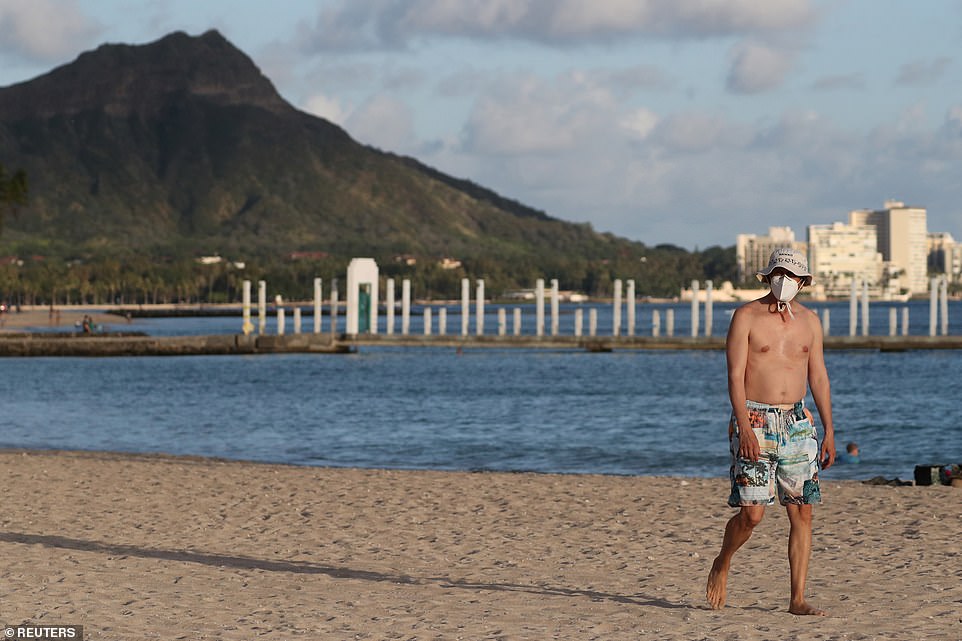 Hawaii is the only state in America that has not laid out plans to lift its indoor mask mandate in the coming weeks. Pictured: A man wears a mask on a beach in Honolulu, Hawaii, on April 28, 2020 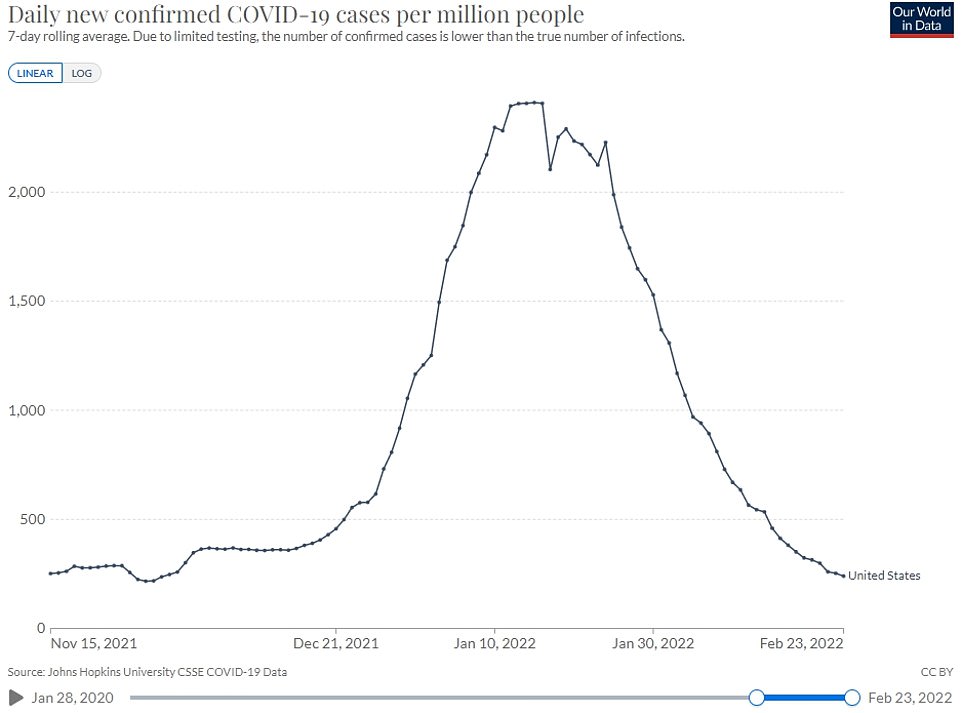 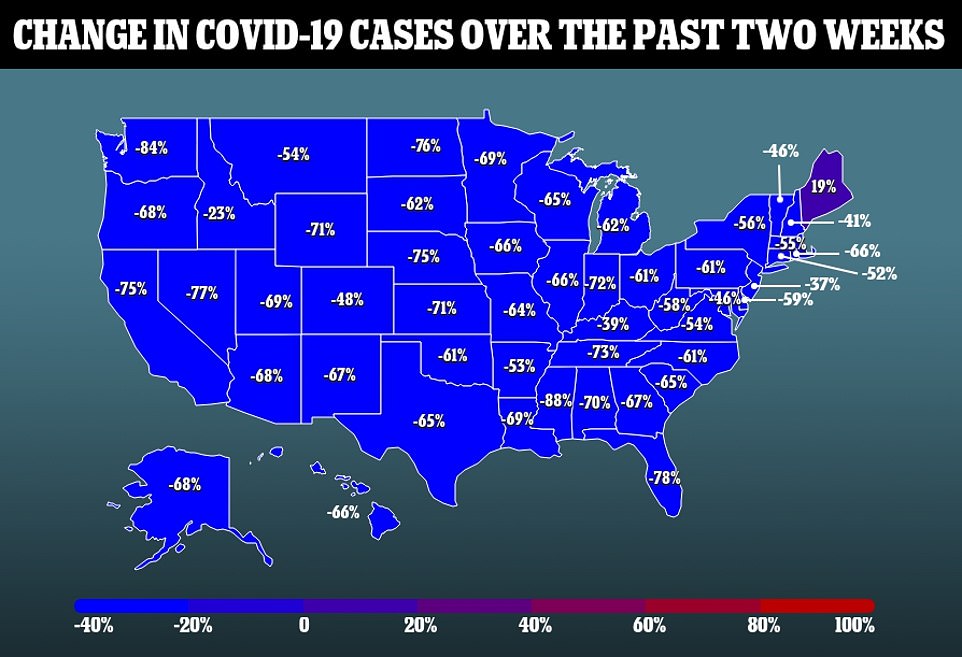 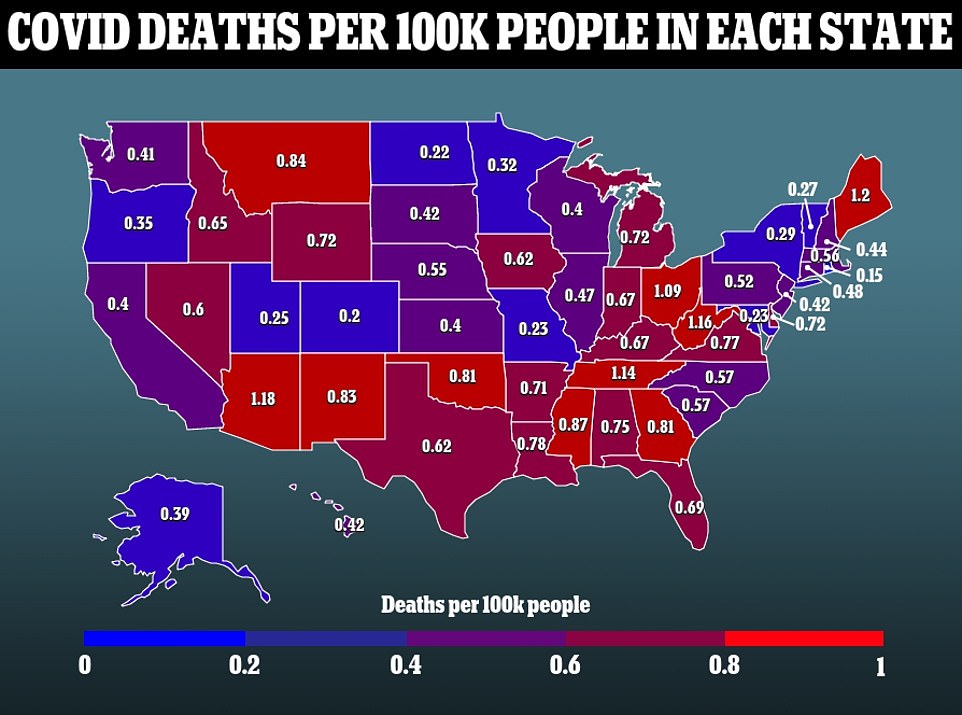 Cases in California have dropped 80 percent over the past two weeks and only 24 of every 100,000 residents are testing positive for the virus daily.

‘We are moving past the crisis phase into a phase where we will work to live with this virus,’ Newsom said at a news conference announcing the ‘Smarter’ plan on Thursday.

‘People are looking forward to turning the page,’ he added. ‘They also need to know we have their back, we’re going to keep them safe, and we’re going to stay on top of this.’

California is now the first U.S. state to declare the virus ‘endemic’, and the nations most populous state now joins a growing list that have begun to rollback mandates as cases continue to decline.

Newsome rolled back his states indoor mask mandate for vaccinated residents in mid-February, though he left options open for county and city level officials in the state to reapply mandates at their own discretion.

While nearly all blue states, like California, have lifted these mandates for a majority of indoor public spaces, masks are still required in many schools. School mask mandates are one of the most controversial policies in America at the moment, and some states like New York, Delaware and Maryland still requiring children to mask at school, with no end date set. 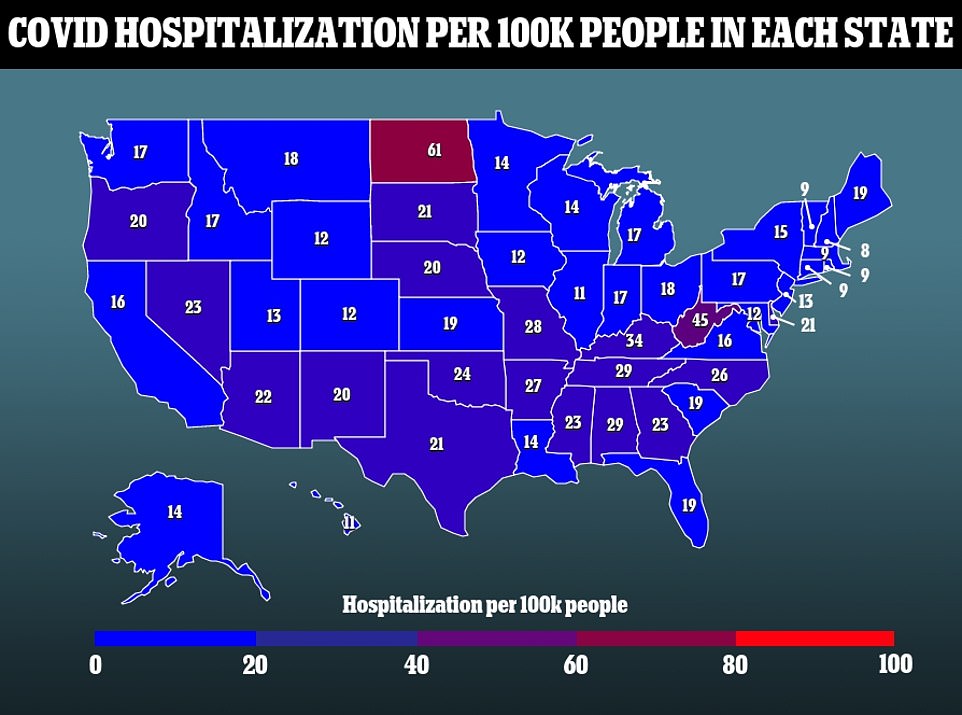 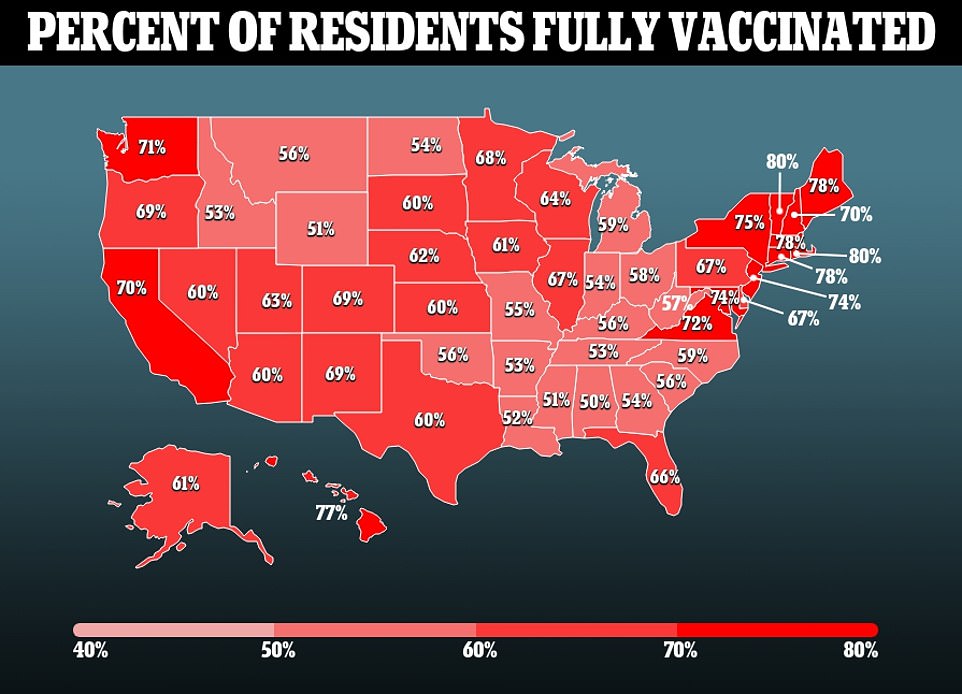 Federal leaders have been hesitant to lift mandates as well. The Centers for Disease Control and Prevention (CDC) still recommends universal masking in public schools and requires people to wear masks when traveling on planes and trains.

‘As a result of all this progress and the tools we all have, we’re moving toward a time when Covid isn’t a crisis but is something we can protect against and treat,’ Zients said.

‘The president and our Covid team are actively planning for this future.’

‘We want to give people a break from things like mask-wearing when these metrics are better, and then have the ability to reach for them again should things worsen,’ Dr Rochelle Walensky, director of the CDC, explained at last week’s briefing.

‘If and when we update our guidance, we will communicate that clearly. And it will be based on the data and the science.

In the UK, Thursday marks ‘Freedom day’, as all Covid related restrictions are now lifted from the nation after a miraculous turn around in recent months. The country was among the hardest struck in the world by the Omicron variant fueled surge at the end of last year, but – like the U.S. – cases quickly plummeted after peaking in January.

Now averaging only 40,000 cases per day, far below the peak of around 180,000 daily, officials are confident they can put the pandemic behind them.

A new threat may be around the corner, though. Officials at the World Health Organization (WHO) are warning global health leaders not to let their guard down as the Omicron ‘stealth’ variant spreads around the world.

The ‘stealth’ variant, or BA.2 as it is officially classified, is a lineage of the Omicron variant that lacks some key indicators that allows for it to be easily sequenced – hence the ‘stealth’ moniker. It is not believed to cause more severe infection than the original, BA.1, version of the variant, but it is around 30 percent more transmissible. 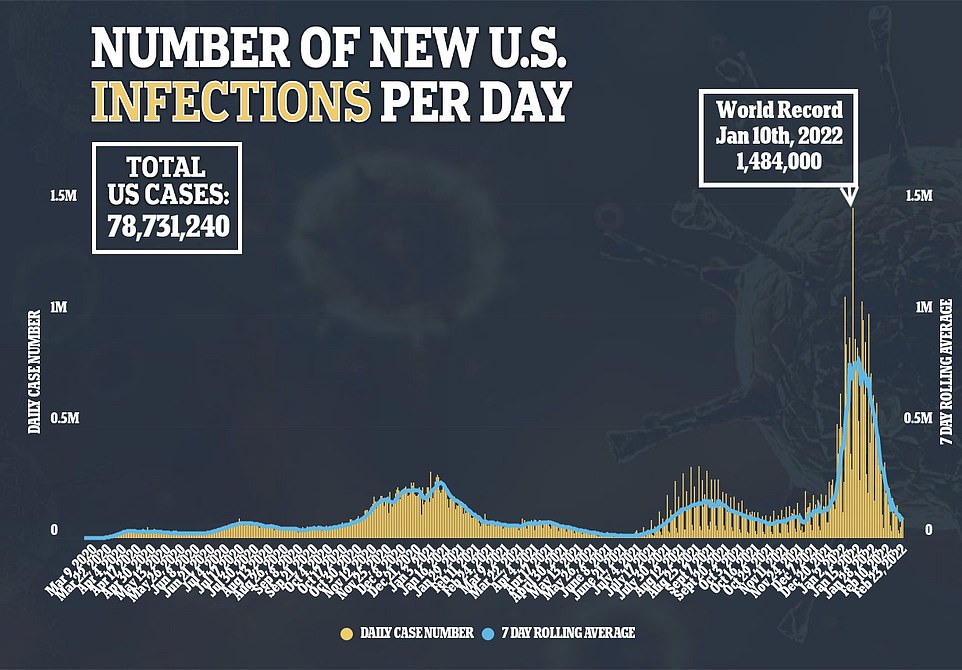 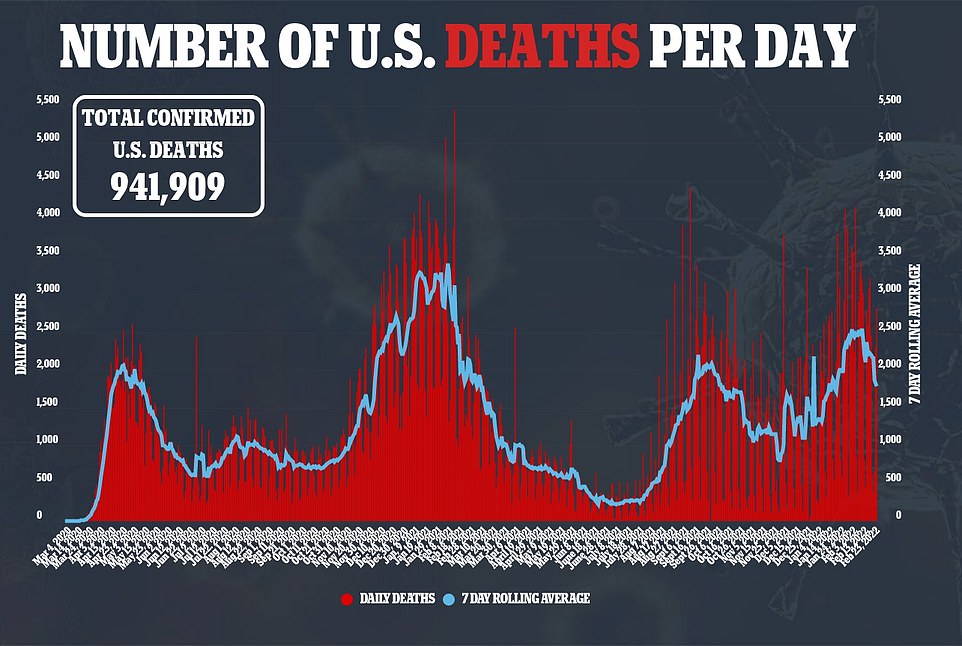 The WHO reports that 35 percent, or more than one of every three, global Covid cases are of the stealth variant. The lineage quickly took hold in Denmark and the UK last month, and stalled the plummeting of case numbers.

Most recent data from the Centers for Disease Control and Prevention (CDC) shows that the lineage still only makes up less than five percent of U.S. cases, while its predecessor – BA.1 – still makes up nearly every single new case in America.

Officials at the WHO say they are monitoring the situation, and looking at data from multiple countries to determine the potential threat level of the lineage.

‘We’re looking not only at how quickly those peaks go up, but how they come down,’ Maria Van Kerkhove, an epidemiologist at the WHO, said.

‘And as the decline in cases occurs…we also need to look at: Is there a slowing of that decline? Or will we start to see an increase again?’

American health officials, while also monitoring the situation, do not seem particularly worried about this new strain and are putting plans in place to move past the ‘pandemic’ phase of Covid.

Covid deaths are continuing to fall as well, giving U.S.-based health officials even more reason to feel comfortable with the current direction of the pandemic. Daily deaths have dropped 20 percent over the past week, with 1,782 Americans succumbing to the virus daily.

Obamacare found to have helped extend lives of people with cancer