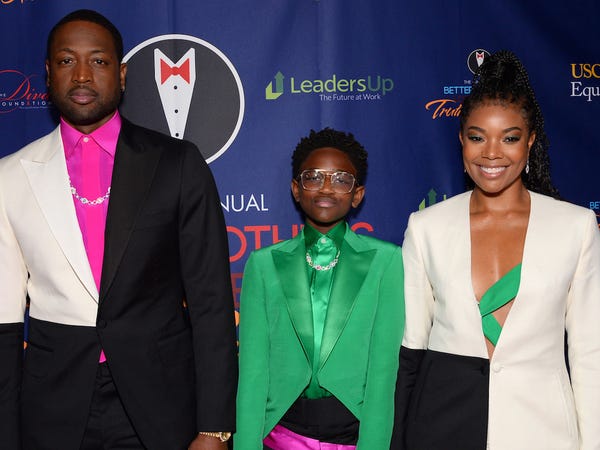 Dwyane Wade and Gabrielle Union have been lauded accept their children as they are and letting them take the lead in their identities.

Wade and Union openly and vocally support their 13-year-old daughter Zaya Wade, who came out as transgender in February. That support is one of the primary reasons they made the Time 100 most influential people of 2020 list.

In their interview, published this week, Union said she and Wade draw inspiration from their children, touching on their two-year-old's frees spirit and Zaya's authenticity.

"We have another daughter who is 13, who has freedom to be exactly who she is, who she was born to be, to be her most authentic self. She doesn't ask permission to exist. That is wildly inspiring," Union told Time.

But despite the accolades and fanfare, Union has said in the past she finds it odd that they receive so much praise for supporting their daughter unconditionally.

"To us, it's a little odd to get any kind of recognition for doing what you're supposed to do, which is love, and accept, and embrace your kids," Union told Ellen DeGeneres in May. "So it's odd to get recognition for that. Unfortunately, there are so many people who just don't."

In a February interview with Robin Roberts on "Good Morning America," Wade said Zaya had helped him grow and understand trans issues better through doing her own research and sitting her family down.

"[Zaya] is our leader. The one thing with parents is have conversations with your kids," Wade told Roberts. "Zaya knew two things when she was growing up — she knew straight and she knew gay. But Zaya started doing more research, she was the one who sat down with us as a family."

Dogfishing Is The New Dating Trend. But Is It A Big Deal?